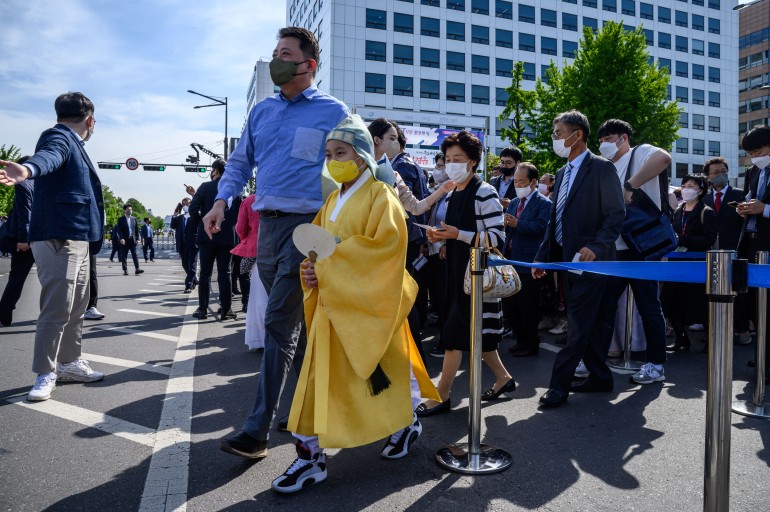 Conservative politician, who won election with a wafer-thin majority, will be sworn in at a ceremony in Seoul.

Yoon Suk-yeol has been sworn in as South Korea’s new president in a ceremony overshadowed by a slew of weapons tests by its nuclear-armed neighbour.

Yoon, a conservative, takes office at a time of increasing tension on the Korean peninsula, with North Korea conducting a record 15 weapons tests since January, two of them last week.

The former prosecutor won the election in March by the slimmest of margins, promising to “sternly deal” with the threat posed by Kim Jong Un’s regime, while leaving open the door to dialogue.

Predecessor Moon Jae-in pursued a policy of engagement with the North holding a summit with Kim Jong Un in 2018 and brokering two summits between Kim and then US President Donald Trump before relations broke down in 2019.

Not much is known about Yoon’s inauguration speech.

Local reports say the 61-year-old is writing the text himself and that it will focus on three keywords: freedom, market and fairness.

The inauguration, costing about 3.3 billion won ($2.6m), is taking place on the front lawn of parliament with some 40,000 guests.

Yoon is taking office with some of the lowest approval ratings – about 41 percent, according to a recent Gallup poll – of any democratically elected South Korean president.

A plan to relocate the presidential office from the decades-old Blue House has soured the public mood with many South Koreans viewing the costly move as unnecessary.