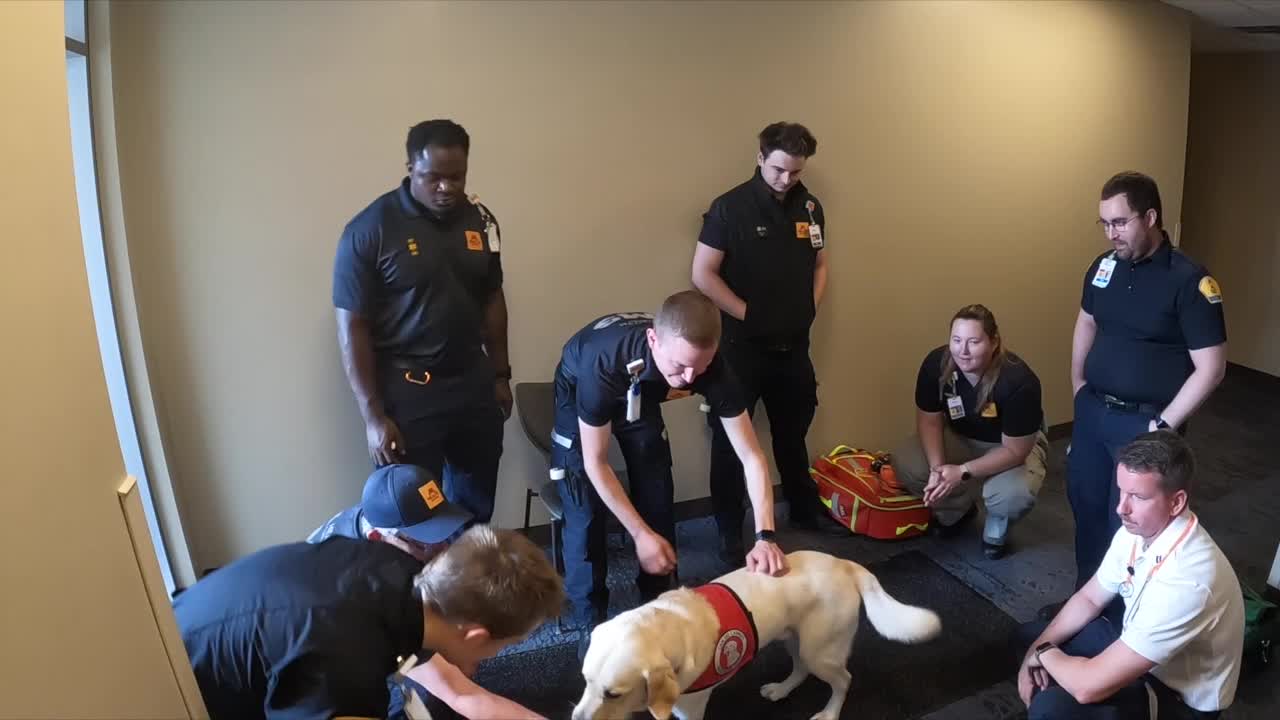 At the M Health Fairview Forest Lake and Saint Paul stations, crews are receiving much-needed stress relief through a comforting companion. Clayton, a yellow lab, has been making visits for roughly the last four months.

“He knows when you’re not yourself, or something has happened and you’re feeling down,” said Nicole Foster, an EMS Education Specialist and paramedic with M Health Fairview. “He senses it and you can kind of tell that he senses maybe this provider needs a little bit of my attention, I’m going to go wag my tail next to them. It is very nice.”

The last few years have been challenging for first responders. The pandemic added to the uncertainty of the calls for service they receive.

“Having in the back of your mind that there’s that risk that I’m going to get COVID, I’m going to bring it home with me, I’m going to share it with my coworkers — it was very stressful,” said Foster. “That kind of overall limited your interactions too.”

About a year ago, Operations Supervisor Kevin Kane started looking at how to address mental health needs in a different way.

“I think the lightbulb went on when we were on a 911 call and the patient was fine, it ended up being a false alarm, and immediately the crews were wanting to pet the owner’s dog,” said Kane. “How do we do that for us?”

He acquired Clayton through Can Do Canines, which trains service animals. Kane said he also worked with Clayton to encourage him to approach EMS crews as they return from the field.

“We see cumulative trauma in the EMS personnel so we need an outlet for that,” said Kane. “Sometimes we forget that we need to take care of ourselves. […] If you can walk in the door and you kind of had a rough day or a rough call and you see him peaking in, I think that makes everything better.”

“It just it gives me a lot of hope,” said Kane. “When we see a lot of the mental health issues that EMS workers, frontline workers go through and then seeing them be able to have an outlet to release some of that stuff, it makes me smile.”

“A lot of us don’t know how to reach out for help, we kind of keep it in,” said Foster. “What’s hard about being in EMS is we see things that other people don’t see. Going to your friends that aren’t in healthcare and EMS, it’s not really an outlet to be able to talk about what you’re witnessing or seeing. You almost feel stuck.”

She believes programs such as this help raise awareness about the mental health challenges first responders face.

“There’s times where we can’t find our words to speak to others or maybe it’s hard to find those words of what we’ve witnessed,” she said. “To have an animal to maybe not necessarily tell what’s going on but maybe feel comforted by them, does relieve some of that stress.”

She hopes to see the program expand in the future.

“Clayton has been a great addition to the company and as a facility dog but we do have three main bases,” said Foster. “To have another dog like him to be present at more of our bases would be awesome.”

Kane agrees and told us he’s already received calls from other agencies looking to implement a similar program.

“I love sharing everything that we’ve learned,” he said. “It would be fantastic if we could duplicate something like this.”