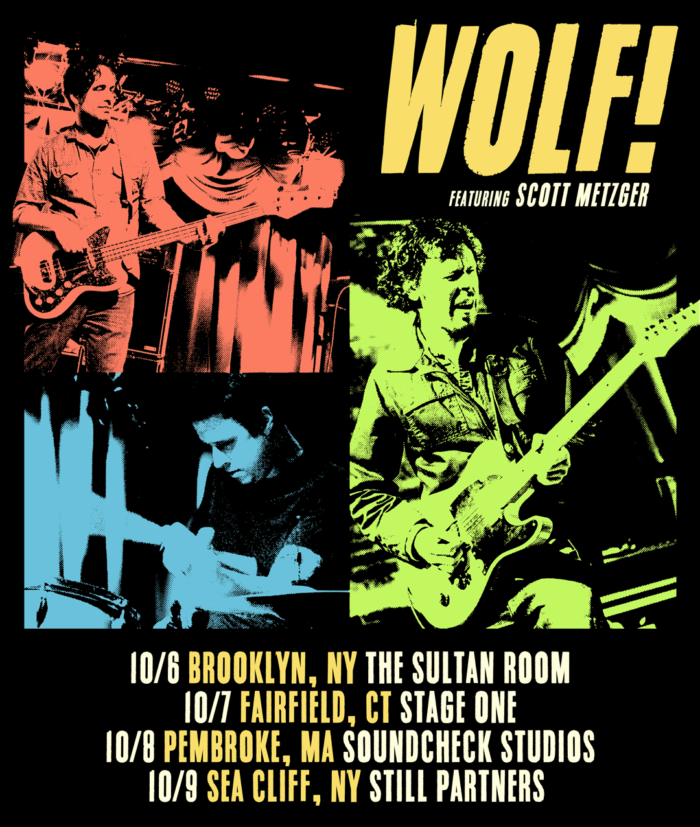 After a six-year hiatus, WOLF! featuring Scott Metzger, Jon Shaw and Taylor Floreth have returned with a new EP, entitled Adult Entertainment, due out on Oct. 28 via Royal Potato Family. Along with the announcement, the trio shared a new single off the upcoming six-track, “Ratso,” listen now.

WOLF!’s forthcoming extended play was tracked at Restoration Sound in Brooklyn, N.Y., and was mixed by Chris Connors. Combining elements of surf rockabilly with a sense of ‘60s boogaloo and a heavy dose of experimentation, the group’s first offering, “Ratso,” is an ideal introduction to a set of music steeped in deep instrumentation.

“WOLF! has a thing. There’s an innate chemistry when the three of us play together,” reveals Metzger via press release. “I don’t hear anyone else really playing instrumental music like this right now. It’s a guitar-centered band, but it’s not about guitar solos or fancy chops. It’s about three dudes in a room making music in real time that just straight up feels good, you get it the first time you hear it. I think we all need a little of that these days,” he concluded.

Moreover, the band has also shared dates for a short east coast jaunt which will commence at the beginning of October, when they descend upon Brooklyn, N.Y.’s The Sultan Room on Oct. 6, followed by an Oct. 7 gig at Stage One in Fairfield, Conn. The final stops will take WOLF! to Pembroke, Mass., for a show at Soundcheck Studios on Oct. 8, before the final concert on Oct. 9 at Still Partners in Sea Cliff, N.Y.