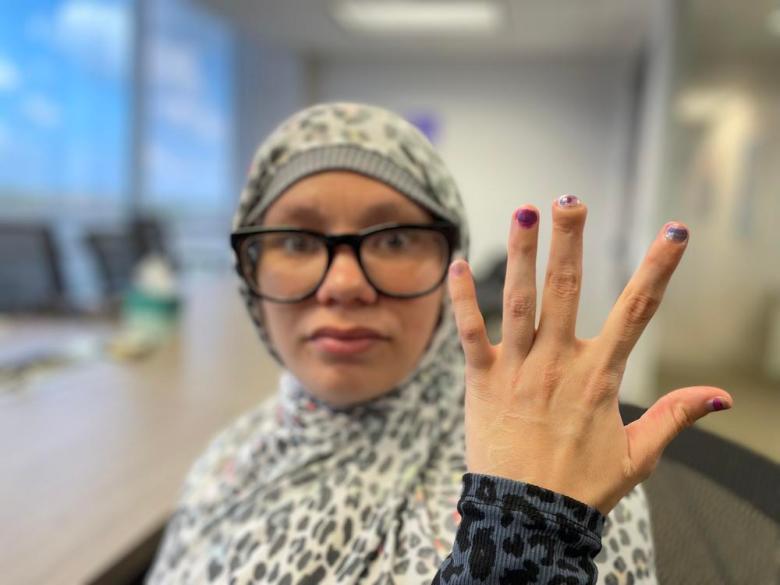 Nova Jaswan would like to stop using cocaine. And she’d like help with some of the other issues that feed into why she uses cocaine.

“I’m schizoaffective; I have PTSD and I have mood disorder NOS — not otherwise specified,” she said. “And I have autism non verbal learning ….”

But she has no health insurance, income, or transportation. Not even a state ID. The only place she has been able to get any psychiatric care is in jail or prison.

She said she was so embarrassed about her situation that she left her son with family rather than have him find out how his mother was struggling.

“I said, ‘Well, I’d rather be a jailbird than a street rat, and I’d rather be in prison than doing drugs on the street,’” Jaswan said.

Unable to find adequate resources elsewhere, Jaswan, now 29, cycled through Georgia’s criminal justice system from 2015 through her last release from jail in May 2021.

Despite settling her court case in February 2020, she waited until earlier this year for transfer to a behavioral health program where she could access a psychiatrist, get help with housing, and find employment.

She’s not alone in her cyclical situation.

The Fulton County Accountability Court says one-third of all defendants housed in its jail receive some type of psychotropic medication, and more than 75% test positive for illegal drugs upon arrival (or refuse to take the test).

The jail’s former medical administrator, George Herron, estimated as many as 60 to 80% of people incarcerated in the county’s jail system suffer from psychiatric disabilities, leading him to characterize the Fulton County Jail as “the new mental health hospital,” Mab Segrest wrote in Administrations of Lunacy: Racism and the haunting of American Psychiatry at the Milledgeville Asylum.

The Fulton County Jail is called Georgia’s largest de facto mental health facility because of the high prevalence of mentally ill detainees. Often, they have no place else to go until a crime is committed.

Jaswan struggled with the first court-ordered program, and, when she left treatment early, she said she purposefully got locked up again by breaking windows “as big as a door.”

The cost of incarceration

One way to calculate the average cost per inmate is to take the total state spending on prisons and divide it by the average daily prison population. Prison (as opposed to jail) is for people who have been convicted of crimes and sentenced to confinement for more than a year.

Georgia spends about $20,000 annually, on average, to staff and maintain the prisons and provide all prison services, according to a 2015 report by the Vera Institute of Justice.

That figure doesn’t include collateral consequences, such as financial strain on the offender’s family, the difficulty offenders have in finding employment after release and the increased likelihood they will offend again once released.

Additionally, judges aren’t always given this full picture of people who are arrested and the potential financial and social consequences of their sentencing decisions, according to a recent study by researchers at the University of Georgia.

Instead, the researchers found judges receive pre-sentencing reports that are produced by prosecutors and focused only on the benefits of incarceration.

UGA’s study found that judges gave significantly shorter sentences in a hypothetical case when given both the potential negative cost and social consequences of incarceration than those who were not.

Jaswan said she continued to commit crimes despite knowing just how bad the conditions in the jail were. She was one of the plaintiffs in a civil action lawsuit filed against then-Fulton County Sheriff Ted Jackson, Chief Jailer Mark Adger, and other jail officials in 2019.

The Georgia Advocacy Office, a private nonprofit organization for Georgians with disabilities based in Decatur partnered with the Southern Center for Human Rights to bring the case on behalf of itself and its constituents who experience psychiatric disabilities who were confined at the South Fulton Municipal Regional Jail, or were at risk of confinement.

The jail, located in Union City, houses pretrial detainees, and can hold up to 325 people, about 40 of whom are women. It has three wings for women with mental illnesses, and many reside alone in a single cell because they are deemed too ill to share space with another person, the Southern Center said.

The suit also alleged many women with mental illness had deteriorated psychologically while held in solitary confinement in the jail’s South Annex.

One 26-year-old woman jailed on misdemeanor charges of criminal trespassing and prowling was only permitted to go outside for recreation only once between Nov. 3, 2018, and Feb. 28, 2019, SCHR’s Executive Director Sara Totonchi wrote in May 2019.

“To make matters worse, thanks to a perpetually malfunctioning toilet, K.H.’s cell floor is often flooded with standing toilet water,” Totonchi wrote. “She must either use her sheets and blankets as a sponge or live with toilet water surrounding her. On the days that she chooses to mop up the water, she is forced to sleep on the metal bed frame without bedding.”

Jaswan described her experiences in the jail similarly, and she added that once the heavy, metal door to her cell caught her finger.

“And then I saw blood and I was like, What? And I looked at it and it was just the tip of my finger, you know, a little bit more than just the tip which is gone,” Jaswan said. “And I, you know, I went into shock.”

Guards called an ambulance, and her finger was sewn back up in the emergency room, but the tip could not be reattached.

Many women held in South Fulton isolation cells cut themselves, banged their heads against the wall, and some even attempted suicide, the lawsuit said.

The case was settled earlier this year, and a court order now demands that women in the South Fulton Jail be held in safe, sanitary conditions, Devon Orland, the legal director of the Georgia Advocacy Office said.

Additionally, the jail must eliminate solitary confinement and ensure that all women at the jail receive sufficient out-of-cell time, seven days a week, including time for fresh air and exercise, every day, in the outdoor recreation area.

A lack of behavioral health resources

Because Georgia has consistently ranked at the bottom in the nation for access to mental health care, that includes a lack of services for minors.

“We also know that most youth who do receive mental health services do so at school, so having school-based services is something that is especially important for youth,” she said.

A growing percentage of youth nationwide live with major depression, and 15.08% of youth experienced a major depressive episode in the latest year of reported data, which represents a 1.24% increase from the previous data set, according to the latest Mental Health America report.

Kids who grow up with unrecognized and untreated behavioral health issues can easily wind up in the criminal justice system as adults.

“Mental health intersects with public safety,” Ralston said. “It drains our economy of productivity. At its most basic level, it allows hopelessness to win the battle for the future and bring pain to those who are left to suffer the consequences.”

PREVIOUS COVERAGE: Ga. House Speaker Ralston says ‘No issue is more important to me this session than mental health’

The legislation is expected to improve Georgia’s mental health services by allowing the state commissioner of insurance more power to enforce the federal Mental Health Parity and Addiction Equity Act of 2008. This law says behavioral health care and physical health care must covered equitably, or on parity.

MORE: This Is What Happens When Georgians Experience Mental Health Or Addiction Crisis

Group health plans and health insurance issuers that provide mental health or substance use disorder benefits are prevented from imposing less favorable limitations on those benefits than on medical/surgical benefits.

For example, if a person breaks a bone three times in the same year, that injury will be covered as an emergency each time. But that isn’t always the case when someone with substance use disorder relapses or overdoses.

“For much too long, our mental health care delivery system has been inadequate,” Ralston said. “The accessibility and availability of treatment has been woefully limited.”

Experts argue that expanding Medicaid would help more people reach more help for mental illness and substance use disorders. Georgia is one of a dozen states that so far have chosen not to expand Medicaid, except for increasing coverage from six months to a year for low-income postpartum women.

The Georgia Budget and Policy Institute, along with several health care and criminal legal system reform groups, sent a letter March 16 to lawmakers who had expressed interest in making improvements to health care and the criminal legal system urging them to expand Medicaid, which they said would help reduce recidivism and support reentry into society.

“After reentry, these Georgians become responsible for their own health care but because they face challenges to gaining meaningful employment, let alone employment that provides health benefits, health care coverage is often out of reach,” Khalfani said. “Lawmakers interested in supporting a healthy return for Georgians reentering society should expand Medicaid in Georgia.”

A microcosm of society

Orland said what has been going on in the Fulton’s Jail is a microcosm of what is happening in society, and the solution is a better safety net for behavioral health issues.

“We could reduce the pressure and the strain on the jails by having a meaningful community-based mental health system,” Orland said.

Cobb County’s sheriff agrees and says many of the detainees there would not be jailed if they had access to quality mental health services.

That’s why, last November, the jail added a full-time psychiatrist and nurses trained in behavioral health to the detention center’s staff. Cobb’s jail is the first in the state to do so.

Cobb County Sheriff Craig Owens said in a statement that “From intake to discharge, we are committed to getting our detainees the help they need so they never have to walk back through our doors again.”

As for the Fulton County Sheriff’s Office, Sarah Geraghty, a lawyer with the Southern Center for Human Rights, wrote that the jail should hire a mental health expert to audit the care of jail detainees, ensure mental health care providers maintain adequate staffing levels, and ensure mentally ill women are housed in sanitary conditions and are allowed time outside their cells.

But until Georgia has more support for those with the least access to care, jails will likely remain the largest mental health facility in the state.

Georgia Public Broadcasting is part of the Mental Health Parity Collaborative, a group of newsrooms that are covering challenges and solutions to accessing mental health care in the U.S. The partners on this project include The Carter Center, The Center for Public Integrity, and newsrooms in Arizona, California, Georgia, Illinois, Pennsylvania, and Texas.