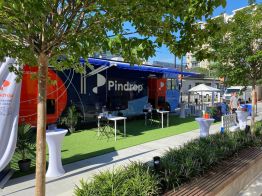 Pindrop is hitting the road this summer to reintroduce itself as a security company with a whole lot more to say.

Those in the Atlanta startup community know Pindrop for its “voiceprinting” and voice fraud detection platform that was an early cybersecurity darling. The team has raised over $200 million in venture funding to date from the likes of Andreesen Horowitz, IVP, Citi Ventures, and Goldman Sachs.

But as voice technology has expanded, Pindrop has also broadened its focus beyond fraud. The next chapter of Pindrop is about bringing voice authentication and security into IoT, consumer, and mobile spaces.

That expanded focus is on full display during Pindrop’s Soundproof Tour, an event taking the company across the country via RV to showcase Pindrop’s new technology and its updated brand. The tour kicked off earlier this summer in San Francisco at the RSA Conference, one of the largest cybersecurity conferences of the year.

This week the RV parked itself outside The Interlock, Pindrop’s new West Midtown office location, to give Atlantans a hint of what the late-stage startup is up to next.

Such a reintroduction is necessary for an Atlanta-based cybersecurity company that has expanded its focus so drastically over the last few years.

Pindrop was co-founded in 2011 by Vijay Balasubramaniyan, Paul Judge, and Mustaque Ahamad, two Georgia Tech PhDs and a Georgia Tech professor. The company has grown to nearly 300 employees, according to LinkedIn. One in four of those employees hold a Ph.D., Balasubramaniyan told Hypepotamus.

While at the Atlanta stop of the Soundproof tour this week, Balasubramaniyan said that the voice technology sector has exploded since Pindrop first got off the ground. He said it took a long time to get early investors on board because there was concern that phone calls were going out of style thanks to text messaging and other digital forms of communication. But it only took six weeks to close its $90 million Series D in 2018, as voice authentication use cases have expanded well beyond just call centers.

“There’s no way we could have predicted this growth,” Balasubramaniyan said, referring to the rise of Alexa, connected devices, and the number of new paths for consumers to use their voice for identification purposes.

This means Pindrop has expanded its customer base beyond call centers and financial institutions and is now going after the larger voice-embedded world of televisions, cars, and smart devices.

Ben Cunningham, Director of Product Marketing, likes to describe Pindrop’s technology as a “Swiss Army Knife” for voice since it can help transform speech into a form of identity verification and a way to curate and streamline customer experiences. 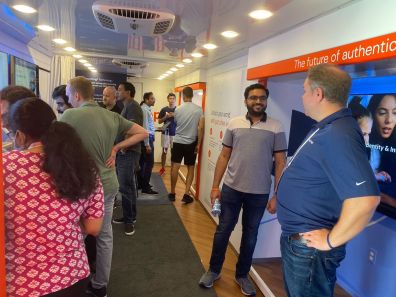 The last few months have been all about partnerships for Pindrop, spearheaded by work with Google Cloud, Amazon, Bandwidth, Verizon, and several large service providers. At the same time, the team shifted to a remote-first work model and moved its HQ to The Interlock in West Midtown, one of the popular new spots for technology-focused ventures.

Pindrop’s expanded focus makes it poised for further growth in the connected device space, Balasubramaniyan added. The team has been profitable over the last few years and hasn’t needed to raise additional outside capital since 2018, which is somewhat rare for late-stage startups going after significant enterprise clients.