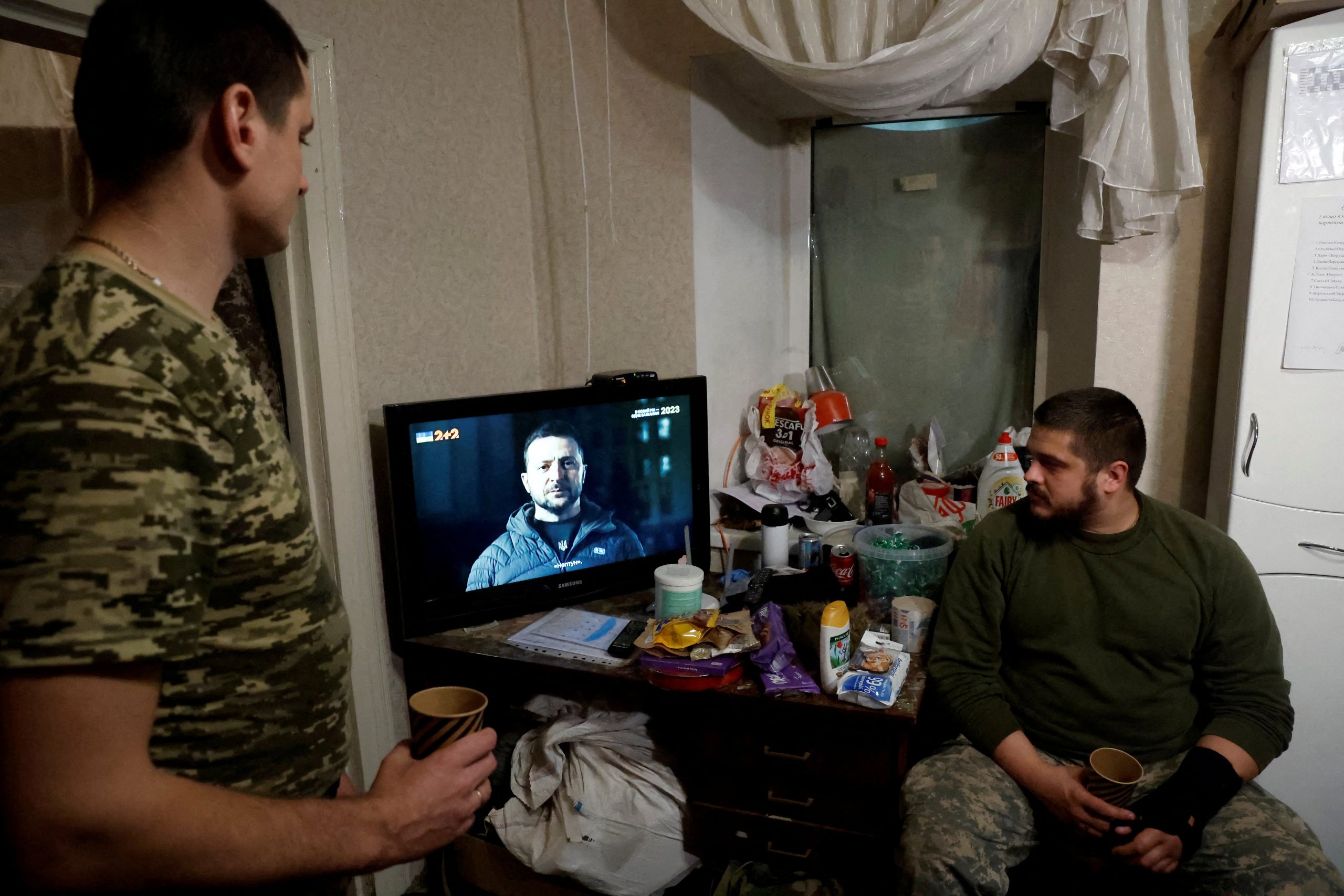 KYIV/DONETSK PROVINCE FRONT LINE, Ukraine, Jan 1 (Reuters) – Ukrainians cheered from their balconies while their air defences blasted Russian missiles and drones out of the sky in the first hours of 2023, as Moscow saw in the new year by attacking civilian targets across Ukraine.

Ukrainian forces shot down 45 Iranian-made Sahed drones fired by Russia on the first night of the year, President Volodymyr Zelenskiy said on Sunday evening, praising Ukrainians for showing gratitude to the troops and one another.

“Drones, missiles, everything else will not help them,” he said of the Russians. “Because we stand united. They are united only by fear.”

A stern New Year’s speech from Russian President Vladimir Putin signalled no let-up to his assault on Ukraine, in contrast with Zelenskiy’s earlier message of hope.

As sirens blared in Kyiv, some people shouted from their balconies, “Glory to Ukraine! Glory to heroes!”

Fragments from the late-night attack caused minimal damage in the capital’s centre, and preliminary reports indicated there were no wounded or casualties, Kyiv Mayor Vitali Klitschko said on social media. Attacks earlier on Saturday had hit residential buildings and a hotel in the capital, killing at least one person and injuring more than 20.

U.S. Ambassador to Ukraine Bridget Brink said on Twitter: “Russia coldly and cowardly attacked Ukraine in the early hours of the new year. But Putin still does not seem to understand that Ukrainians are made of iron.”

At the front line in Ukraine’s eastern Donetsk Province, troops toasted the new year. Soldier Pavlo Pryzhehodskiy, 27, played a song on guitar he had written at the front after 12 of his comrades were killed in a single night.

“It is sad that instead of meeting friends, celebrating and giving gifts to one another people were forced to seek shelter, some were killed,” he told Reuters. “It is a huge tragedy. It is a huge tragedy that cannot ever be forgiven. That is why the New Year is sad.”

In a nearby front line trench, soldier Oleh Zahrodskiy, 49, said he had signed up as a volunteer after his son was called up to fight as a reservist. His son was now in a hospital in the southern city of Dnipro, fighting for his life with a brain injury, while his father manned the front.

“It is very tough now,” he said, holding back tears.

Andrii Nebytov, chief of Kyiv’s police, posted a photo on his Telegram messaging app, showing what was described as a piece of drone used in an attack on the capital, with a hand-written sign on it in Russian saying “Happy New Year”.

“This wreckage is not at the front, where fierce battles are taking place, this is here, on a sports grounds, where children play,” Nebytov said.

Russia has flattened Ukrainian cities and killed thousands of civilians since Putin ordered his invasion in February, claiming Ukraine was an artificial state whose pro-Western outlook threatened Russia’s security. Moscow has since claimed to have annexed around a fifth of Ukraine.

Ukraine has fought back with Western military support, driving Russian forces from more than half the territory they seized. In recent weeks, the front lines have been largely static, with thousands of soldiers dying in intense trench warfare.

Since October, Russia has launched mass missile and drone attacks on Ukraine’s energy infrastructure, casting cities into darkness and cold as winter sets in. Moscow says the strikes aim to reduce Ukraine’s ability to fight; Kyiv says they have no military purpose and are intended to hurt civilians, a war crime.

“The main thing is the fate of Russia,” Putin said in a New Year’s Eve address in front of a group of people dressed in military uniform instead of the normal backdrop of the Kremlin walls. “Defence of the fatherland is our sacred duty to our ancestors and descendants. Moral, historical righteousness is on our side.”

Zelenskiy delivered his own address on Saturday in near darkness, in front of a fluttering Ukrainian flag. He described the year past as a national awakening.

“This year has struck our hearts. We’ve cried out all the tears. We’ve shouted all the prayers,” Zelenskiy said. “We fight and will continue to fight. For the sake of the key word: ‘victory’.”

The latest air strikes damaged infrastructure in Sumy, in the northeast, Khmelnytskyi in the west as well as Zaporizhzhia and Kherson in the southeast and south, the General Staff of Ukraine’s Armed Forces said.

Grid operator Ukrenergo said the past day had been “difficult” but the electricity situation was “under control” and emergency outages were not being implemented.

In Russia, Vyacheslav Gladkov, governor of the southern region of Belgorod bordering Ukraine, said overnight shelling of the outskirts of Shebekino town had damaged houses but there were no casualties.

Russia’s RIA state news agency cited a local doctor as saying six people were killed when a hospital in Donetsk was attacked on Saturday. Proxy authorities in Donetsk also said one person had been killed by Ukrainian shelling.

Reuters could not verify the reports. There was no immediate response from Kyiv, which rarely comments on attacks inside Russia or on Russian-controlled territories in Ukraine.