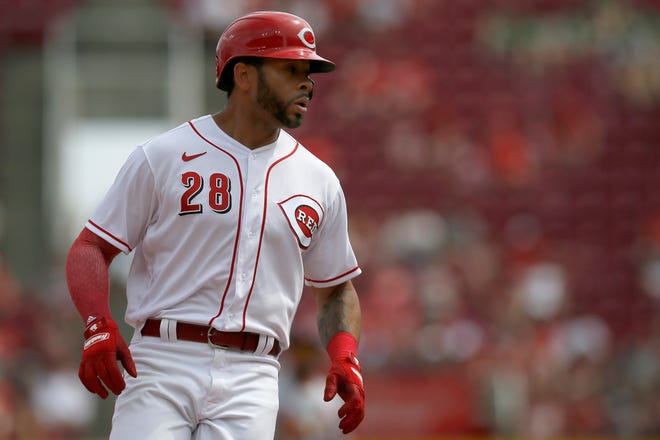 “I slapped Joc,” Pham said. “He did some (expletive) I don’t condone, so I had to address it.”

The dispute stemmed from their fantasy football league last offseason and what Pham described as a “disrespectful” text message from Pederson about his former San Diego Padres teammates.

Pederson read from the text messages in the group chat to San Francisco reporters after Saturday’s game.

“He responded, ‘Joc, I don’t know you well enough to make any jokes like this.’ I wrote back, ‘It was meant to be all fun and games. No hard feelings. Sorry if you took it that way.’ Then about two weeks later, after like Week Four or Five, he ended up leaving the league and there has been no communication since.”

The GIF that Pederson sent had three weight lifters with team logos of the Giants, Los Angeles Dodgers and Padres above each of them. The weight lifter under the Padres logo was hit by the weight and fell over.

“Because they were a really good team, so it was kind of making fun of how they were not playing well to make the playoffs with a very talented team,” Pederson said. “I was teammates with some of them. It was supposed to be lighthearted. I understand everyone takes jokes differently, so I apologize for that. I’m looking to move past this and show up tomorrow with no distractions.”

In the fantasy football league, Pederson said he was accused of cheating in a group text when he put a player on his injured reserve after the player was listed as out. Pederson said he pointed out Pham did the same thing with one of his players, running back Jeff Wilson.

During Friday’s batting practice, Pham walked up to Pederson, told him he didn’t forget about what happened in their fantasy league and slapped him across the face.

“We had too much money on the line,” Pham said. “You could look at it like there is a code. You’re (messing) with my money and you’re going to say some disrespectful (expletive), there is a code to this.”

Pham didn’t detail Pederson’s text when he spoke to reporters before Saturday’s game, but he noted he immediately told Pederson how he felt about it.

“It was some (stuff) that you just don’t say,” Pham said. “I told him in the text, right when he texted it, I’m not cool enough with you to be talking like this. He should’ve known right then and there.”

“It was this past year,” Pham said. “I was in second place when I dropped out of that league. There was a lot of money on that line. I’m a big dog in Vegas. I’m a high roller at many casinos. You can look at my credit line. We were playing big money. I don’t have to get into the details of how much, but I look at it like if you lost, you had to pay double. If you came in last place, you had to pay double. So, I looked at it like he was (messing) with my money along with the disrespect.”

More:Hunter Greene battles through adversity and picks up the win versus the Cubs

More:Paul Daugherty: Hunter Greene will benefit in the long run after days like Thursday

Pham will lose $111,111 from the three-game suspension, plus he was fined an undisclosed amount from the league.

Knowing the likelihood of a suspension, why did Pham slap Pederson?

“From the text message he sent about my former team and how I felt like there was some flawed (stuff) going on in that league,” Pham said, “that’s why.”

Pham sat out of Friday’s series opener against the Giants, a 5-1 win, because he said he felt pressure from MLB. The Reds announced after the start of the game that Pham had agreed not to play pending MLB’s investigation of the altercation.

More:Nick Senzel is entering a crucial stretch of his career with the Cincinnati Reds

Pederson confirmed Giants manager Gabe Kapler and general manager Farhan Zaidi pressured the Reds to bench Pham. Michael Hill, MLB’s senior VP for on-field operations, announced Pham was suspended and fined for “inappropriate conduct.” Pham said he accepted the suspension without an appeal because “it sounds like if I appeal, it might only get worse.”

“I think anytime one individual strikes another individual, it’s serious,” Kapler told reporters Saturday, “and it’s just something we all know can’t happen in a workplace.”

Pham said the dispute with Pederson was over after he slapped him Friday. He will sit out the remainder of the series against the Giants, but the Reds will travel to San Francisco for a three-game series from June 24-26.

“Look, I’m in this game to play baseball,” Pham said. “If he had a problem, he should have addressed it right then and there. There weren’t too many people in the outfield. It was me and (Albert) Almora for a good 20-30 seconds. If you want to do something, you should have done it.” 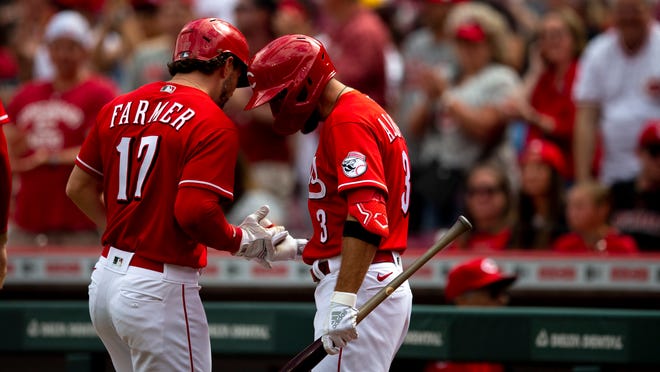