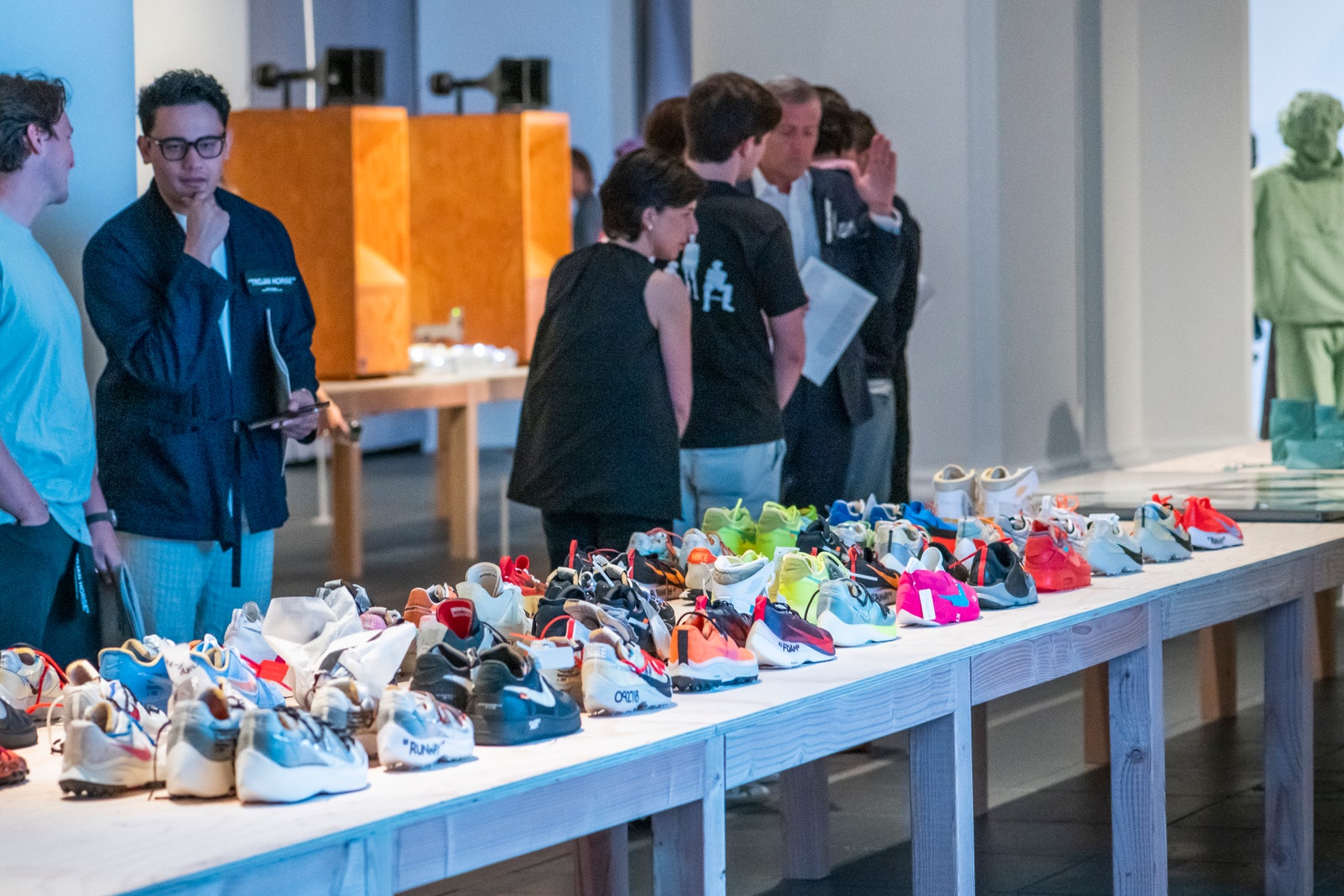 On opening day of “Figures of Speech,” the Brooklyn Museum’s new posthumous retrospective of work by the late designer Virgil Abloh, it seemed fitting that the visitors waiting to be let in were all wearing their best sneakers, as the guards were, too. As part of the uniforms that Abloh specially designed for the museum’s security staff, they wore unreleased sneakers from Abloh’s Off-White collaboration with Nike—a pair of low-top Air Force 1s in an extraordinarily bright green.

One museumgoer, wearing a pair of spotless Off-White Jordan 1s in University of North Carolina blue, chatted with a guard about whether or not the sneakers (known officially as the Off-White x Nike Air Force 1 Low in “Light Green Spark”) would appear on StockX come week. It was clearly not the guard’s first conversation of the sort that day. The museum tried to deter buzz about a surprise sneaker drop ahead of the show, but sneakerheads lined up outside early anyways, convinced there would be green shoes for sale inside.

The show’s lead curator, Antwaun Sargent, previewed the uniforms on Twitter a few days before the show’s July 1 opening, noting that Abloh and Nike had produced and sold sneakers for earlier iterations of “Figures of Speech,” which debuted at Chicago’s Museum of Contemporary Art in 2019 and traveled to Atlanta, Boston, and Doha before the designer’s death from cancer in November 2021. But the green shoes he created for the Brooklyn Museum show, which features new sculptural work and archival material, could only be “seen, for now, exclusively on the exhibition guards.”

As far as physical objects go, Abloh’s Air Force 1s are the icons of his career: always sought-after, now a pillar of sneaker culture in perpetuity. They were the subject of another recent Brooklyn installation presented by Louis Vuitton, where Abloh was artistic director of menswear, and they appear throughout “Figures of Speech,” both on actual display and on the feet of staffers and visitors alike. It is a very Virgil gesture to create a special version for the show’s guards—who, by nature of working inside the exhibition, end up spending more time with the artwork than anybody else—but it is also an extension of his practice. “He thought about every detail,” Sargent said, speaking by phone en route to an event for the museum’s members last week. “He has a background in engineering and in architecture, and he considered the way that people occupied spaces and what they wore while they were in those spaces, deeply…. It’s a way that we use fashion to confer value, and to confer beauty onto people and the folks who we dress.” Museum guards, Sargent noted, “are often overlooked, quite frankly, and Virgil decided that he wanted to make sure that they were very much a part of the exhibition.”

(As for the shoe’s color, Sargent said, “we never had a conversation particularly about the significance of green in relationship to the show,” though he sees it as a continuation of Abloh’s love for Houston slab car culture and its acid-hued candy-paint jobs. The sneakers, he added, are the only green objects in the actual exhibition.)