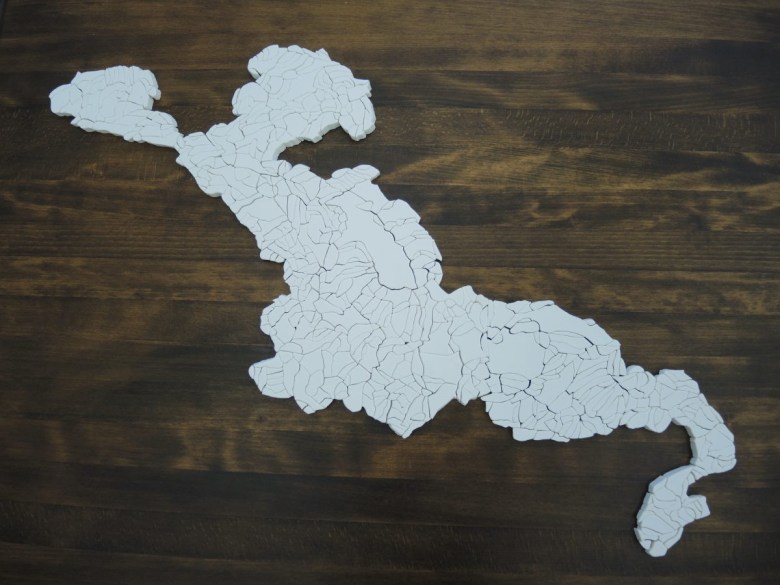 LONDON — The story of air as we know it begins some three billion years ago, when the first ocean-dwelling cyanobacteria began to draw energy from the sun, taking in carbon dioxide and emitting oxygen to create the delicate molecular balance needed to sustain a reciprocal relationship between plant and animal life. In the Air at Wellcome Collection points out that the majority of the oxygen in our air is produced not by trees and forests in carbon capture but by marine organisms, such as seaweed, algae, and phytoplankton.

Inspired by inventor Charles Babbage’s idea of air as “atmospheric memory,” this well-paced exhibition draws together contemporary art, design, and scientific research to consider the notion of air as a common space that belongs to and affects the whole of humanity. In the Air is imagined as a journey through the ether, encountering three symbolic “strata” to explore air as an ecological, social, and political substance.

The first section addresses the air that is produced or stored in oceans and earthbound substances. Its representations of algae and seaweed include cyanotypes by 19th-century photography and botany pioneer Anna Atkins, as well as illustrations by naturalist and eugenicist Ernst Haeckel (a nearby wall text acknowledges Haeckel’s racist views). The space also features Irene Kopelman’s porcelain sculpture “Gornergletscher from On Top” (2017), which depicts a large mass of ice in the Alps that is shrinking due to climate breakdown. The air bubbles in historic sheets of ice like this one archive the history of respiration and atmospheric changes on earth; as the ice recedes, this vital data is lost at an increasingly rapid rate.

In the age of the coronavirus, people have become more cognizant of the shared nature of our air, or of what the curators describe as an “increasing awareness of breathing as a shared, intimate act.” At the same time, the socioeconomic and health impacts of the pandemic have not been felt equally across divides of class and race, revealing that the notion of us all breathing the same air is a myth.

Throughout the show, the curators endeavor to make air and its constituent parts visible, opening with David Rickard’s powerful site-specific work “A Roomful of Air” (2022). This stack of concrete blocks equals the exact weight of the air in the gallery, taking into consideration factors such as altitude, humidity, and temperature. Many of us perceive air as synonymous with “nothing”; we imagine, for example, things vanishing “into thin air.” Rickard’s piece emphasizes the material existence of air, which is composed of molecules with physical presence and heft.

The exhibition’s second section focuses on the role of air as a container for microscopic pollutants, bacteria, and viruses, highlighting the slow and invisible violence of airborne pollution. Displayed among other artworks and design and activism artifacts, signage produced by the Choked Up campaign in 2021 reveals that people of color are more likely to live in areas with illegally high levels of air pollution. Inspired by cautionary road signs, the signs warn passersby that “breathing kills.”

The 2021 film Death by Pollution, by Usayd Younis and Cassie Quarless of black & brown films, explains that London’s Great Smog event in the 1950s led to the introduction of the Clean Air Act. It also notes that the government took action only when the pollution began to affect people in wealthy West London, where deaths from lung problems were unusual; nothing was done when illness and death were restricted primarily to lower-class areas in the East End. Campaigners are now seeking to pass a new version of the act that reflects the racial and socioeconomic inequality relative to air pollution.

The most significant work in the show is a large-scale screening of Forensic Architecture’s film “Cloud Studies” (2020), which analyses the colonization of the air we breathe by governments and corporations and examines the use of aerosol substances to repress and control populations. From tear gas used on civilian protestors to herbicides and defoliants deployed in warfare, Forensic Architecture posits the air as a site of exclusion and oppression — but also of solidarity among activists.

In the Air makes clear that most of us have little control over the air we breathe; air ignores national borders, and wind currents can turn localized airborne events into global ones in a matter of days. The exhibition speaks to a need for international cooperation and an end to colonial practices, such as global north countries sending their polluting waste to developing nations to be burned. Every breath we take is increasingly precarious, threatened by the exploitation of the invisible space above our heads as well as by the human-driven destabilizing of carbon dioxide levels in the atmosphere. By making air and its impacts visible, In the Air prompts audiences to consider how we might take more care of the substances we need to survive.

In the Air continues at Wellcome Collection (183 Euston Road, London, England) through October 16. The exhibition was co-curated by George Vasey and Emily Sargent.