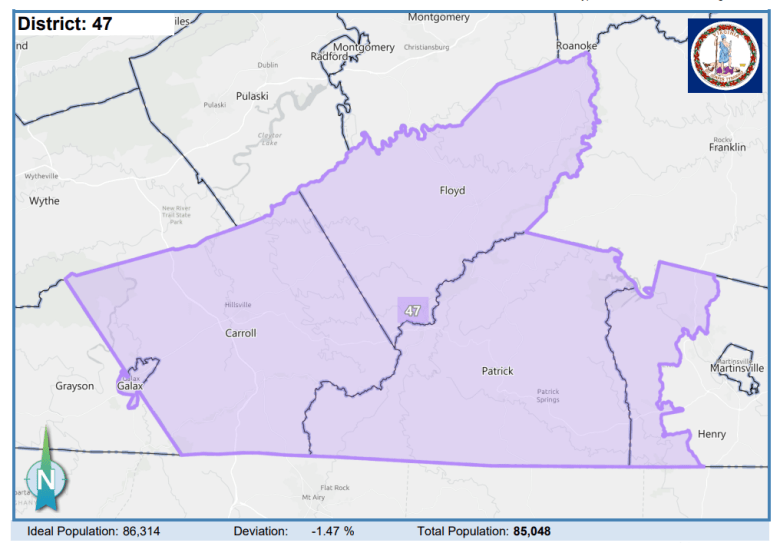 So much of the language we use to describe politics comes from more muscular venues – law, sports, even war – that sometimes we forget those words are only used metaphorically.

We say, for instance, that one politician has “charged” another – Smith charges Jones will raise taxes, Jones charges Smith will underfund schools – but we obviously don’t mean that in the sense of a criminal charge. So what do we do when one politician really does make a criminal charge against another, as Del. Marie March, R-Floyd County, did over the weekend when she swore out an assault warrant against Del. Wren Williams, R-Patrick County?

We always knew that the showdown between these two first-term Republicans – now drawn into the same district by the new redistricting maps – would be something of a Texas cage match. But a criminal charge?!

I can’t imagine that House Speaker Todd Gilbert had a very restful Sunday after he heard the news, which Cardinal’s Markus Schmidt broke that morning. Any party leader has to deal with a caucus where some members might disagree with one another, or maybe even not like each other that much. Politics is no different from any other field of endeavor in that regard. But how do you manage a party caucus where one member has filed a criminal charge against another? Gilbert, a former prosecutor, knows enough to say as little as possible in public. Here’s what he told Cardinal: “Having worked in the criminal justice system for 25 years, I know better than to speculate about what may have transpired until witnesses are called in a court of law, especially in a highly charged political dispute like this one.”

One thing is certain: This news doesn’t make Southwest Virginia look very good. Nothing like one legislator swearing out a criminal warrant against another to bring back the colorful history of what was once known as the Fightin’ Ninth – and not necessarily metaphorically, either.

I won’t speculate on who’s right or who’s wrong – you can read Markus Schmidt’s follow-up story and watch the surveillance video – but I will try to shed some light on the politics involved.

Why don’t March and Williams like each other? They’ve both had a lot to say about that, both in our original story and follow-up stories in The Roanoke Times and The Washington Post. Whatever personal animosity there may be between the two, it’s certainly accentuated by cartography: Because of redistricting, one of them is going to get knocked out. Those maps came out last December, so technically March and Williams have been pitted against each other before they even took office for their first legislative session earlier this year. The strange thing is that both occupy much the same ground politically. Both come out of the Donald Trump wing of the Republican Party. Williams, a lawyer, was on Trump’s recount team in Wisconsin. March attended the infamous rally on the Mall in Washington where Trump spoke on Jan. 6, 2021. Of course, the fact that both are trying to draw from the same political well might make things even more contentious. This is like two apex predators both trying to occupy the same ecological niche: King Kong vs. Godzilla, if you will. If this were a contest between an establishment candidate and a more right-wing candidate, it would still be contentious but they’d also be trying to reach somewhat different voters. Here, they’re both going after the same voters, which amps up the conflict.

So does this: The redistricting that puts both legislators in the same district also shears off a lot of territory that both candidates ran in last fall. Both kept their home bases – Williams in Patrick, March in Floyd – but each lost their biggest localities. For Williams, that was Franklin County. For March, that was much of Montgomery County and part of Pulaski County. Meanwhile, Carroll County and Galax got added. Together, those two localities account for 42% of the voters in the newly configured district, so there’s a lot of new territory for March and Williams to fight over – figuratively speaking, of course.

What about voters who, for whatever reason, may not want either of these candidates? This raises two questions:

First, does this create an opening for a Democrat? Umm, no.

Second, does this create an opening for a third Republican candidate? Maybe, but don’t count on it.

Here’s why I’m such an emphatic “no” on that first question. At one time, it might have been possible for a Democrat to win this district. Within my memory (which, admittedly, gets longer each day), there were Democratic legislators from some of those communities – Tom Jackson from Carroll County, Mary Sue Terry and Barnie Day from Patrick County. The most recent of those (Day and Jackson) have been out of the legislature for more than two decades now. We’ve had a lot of political realignment since then. Rural Virginia may not think it’s changed very much and, perhaps ideologically, it hasn’t, but parts of it sure have in terms of partisan alignment.

The Virginia Public Access Project has crunched more recent election data. It says the district voted 78.7% for Glenn Youngkin in the 2021 governor’s race.

So, no, I don’t think there’s an opening for a Democrat here. While the Henry County and Patrick County portions of the district were Democratic in more recent times, other parts of that district are so Republican that they were Republican back when Republicans were a fringe party in Virginia. The nature of Republicans may have changed – at one time, Virginia Republicans were the more moderate party in a state dominated by conservative Democrats – but voters’ propensity in some of these counties to vote Republican no matter what hasn’t changed.

You have to go back 1912 to find a year when Floyd County did not vote for the Republican candidate for president. That year it voted for Theodore Roosevelt, a former Republican president, who was running a third-party campaign on the Bull Moose Party ticket. If you discount that, then you have to go back to 1880 to find a year in which Floyd County voted for the Democratic candidate for president – Winfield Scott Hancock against eventual winner James Garfield. In 1932, a blow-out year nationally for Democrats during the Great Depression, there was just one county in the state that stuck with Republican Herbert Hoover over Democrat Franklin Roosevelt. That was Floyd County – and it voted 60% for Hoover. Floyd may not be the most Republican county in the state these days, that would be some of the counties in coal country, but it’s certainly the most reliable. Floyd sometimes has the reputation of being Virginia’s back-to-the-hand hippie capital – FloydFest and all that. That doesn’t show up in the county’s politics, though, unless those hippies are voting Republican. In presidential elections, Floyd is becoming more Republican, not less so. In 2008, Floyd voted 59.09% for the Republican candidate for president (John McCain). By 2012, the Republican percentage was up to 61.13% for Mitt Romney. In 2016, Floyd voted 65.74% for Donald Trump; in 2020, 66.17%.

Carroll County is almost as strongly Republican. It deviated from the Republican fold in 1932 to vote for Roosevelt (barely), but otherwise has been solidly Republican. Unlike Floyd, it stuck with Republican William Howard Taft in 1912. Before that, you have to go back to 1892 to find Carroll County voting Democratic – that year it preferred Grover Cleveland over Benjamin Harrison. Carroll was a 65.09% Republican county in the 2008 election; by 2022, Carroll topped the 80% mark, voting 80.88% for Donald Trump.

So is there an opening for Democrats here? Let history be your guide.

Now, onto my other question: Is there an opening here for a third Republican, an alternative to both March and Williams?

In theory, yes. Because both candidates come from the same general part of the ideological spectrum, there should be room for a more center-right candidate. March and Williams could split what might be called the “MAGA vote,” with the third candidate taking the rest. Plenty of candidates have won primaries that way. Think back to the 2009 Democratic primary for governor, where Terry McAuliffe and Brian Moran split the more left-leaning vote while Creigh Deeds took the more moderate vote to win the nomination. Now just flip the picture to imagine something similar on the right.

That scenario, though, makes a very big assumption: that there will be a primary. I notice lots of media coverage of the incident refers to March and Williams as likely primary opponents. They are certainly nomination opponents, but there’s no guarantee that there will be a primary. March will want a convention because conventions are easier to control. That’s how she won her original nomination while Williams was winning his in a primary. That’s also how Bob Good ousted Rep. Denver Riggleman for the Republican nomination for the 5th District congressional seat: His people controlled the local party machinery and they set the rules that benefited their candidate.

Voters would be better served by a primary – more people participate – but they probably won’t get that chance. That’s the danger of these lopsided one-party districts – a small group of people can effectively control the outcome, rendering elections meaningless. Whoever wins the Republican nomination in that district will win the election for the historical reasons I laid out earlier, but most of the Republican voters in that district likely won’t have a say in who that nominee is because most of those Republican voters don’t show up at party meetings, they just show up at the polling place. That means that while there may be room for a third Republican candidate in a primary field, there probably isn’t room for one in a convention.

Meanwhile, the next big event in the March-Williams contest won’t come in the district at all. It will come in a courtroom in Wytheville.