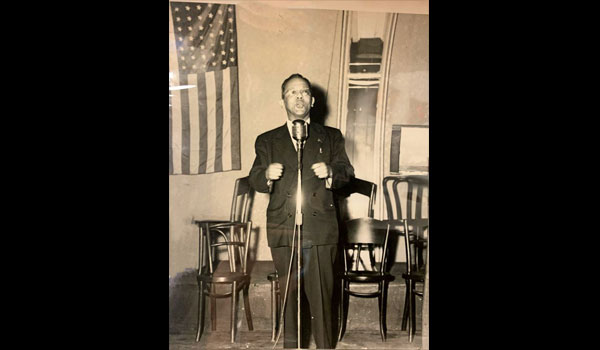 This is the second part of a series on the forgotten history of Latino politics in New York; read part one here.

The Republican Party during the pre-FDR era was surely not the GOP of today, in New York and beyond. This is made clear by who the Republicans chose as their candidate for State Assembly in what was then considered “South Harlem.”

Oscar García Rivera was by no means a Republican as we understand the term today; he had not a single conservative bone in his body. In fact, Garcia Rivera was a true progressive through and through. For supporters like the cigar-makers (see part one of this column), it was easy to rally behind one of their own, for he was not only a Puerto Rican, he was also a socialist.

As is typical of any winning campaign, especially one looking to unseat an incumbent, García Rivera’s victory in 1937 was a result of a confluence of support from leaders and organizations and the right political climate—a climate that increasingly demanded broader representation.

On one hand, after a decade of ardent struggle for representation in which the number of Puerto Ricans in New York continued to rise, nationalist fervor among Puerto Ricans in Gotham was palpable by the time García Rivera sought the Assembly seat in East Harlem. On the other hand, long-standing progressives saw an opportunity to elect someone who aligned with their progressive values. Thus, staunch Marxists, labor activists, the American Labor Party, and the city’s Fusion Party, together with the burgeoning Puerto Rican electorate and a Republican Party looking to defeat a Democrat, were part of a grand coalition that made possible the election of the first Latino in New York.

The prospect of electing “one of their own” was widespread among Puerto Ricans, even in areas outside of East Harlem. La Prensa, one of the first Spanish-language dailies in New York (La Prensa would merge with El Diario de Nueva York to form El Diario/La Prensa in 1963), wrote several articles on García Rivera’s campaign. One such article comes across as rather mundane—“Aumenta el interés en la campaña en el Distrito No. 17.” The piece highlights a “gran mitin” (a great meeting) that brought together the coalition rallying around García Rivera. Even the Spanish-language reporters, who perhaps in this instance relinquished some impartiality, could not contain their glee at the possibility of electing the first Puerto Rican not only in New York but also in the continental United States.

However, García Rivera’s appealing candidacy was a threat to the powers of the time and was met with strong opposition, most notably from the powerful Tammany Hall machine. Their candidate was the incumbent, Meyer Alterman, a Democrat who was also the chairman of the powerful Ways and Means Committee in the Assembly. One of the Spanish-language dailies reported on some of Tammany Hall’s typical shenanigans, including fraudulent voter registrations in order to cast illegal votes.

Responding to one of the Spanish-language dailies’ inquiry into an increase in voter registration ahead of the election, García Rivera himself noted that Tammany Hall Democrats via the Wichita and Owasco Democratic clubs, made a concerted effort to hamper Latino voter registration by providing false information to eligible Puerto Rican voters. In some cases, these Tammany Hall loyalists told Puerto Ricans that they were obligated to take a first-time voter exam in Brooklyn, when this was not the case. In other cases, Tammany Hall made sure to fraudulently pad voter rolls by registering non-Latino individuals in specific Latino households. By García Rivera’s own estimates, out of a total of 6,000 newly-registered voters ahead of the election, at least 2,000 were fraudulent registrants.

It was clear that Tammany Hall would use all their influence, including strong-handed and illegal tactics to deter the first Latino from winning a seat in the Assembly.

Yet, demographic destiny was on García Rivera’s side. Coupled with the support of Mayor Fiorello La Guardia, who ran on the same ticket as Thomas Dewey in his 1937 race for district attorney, and the fierce support of labor leaders like David Dubinsky, Alex Rose, and Mike Quill, García Rivera would go on to defeat the incumbent by more than 1,500 votes in an election that saw 17,807 voters go to the polls.

García Rivera understood right away that his historic election was in part a result of the people’s desire for a change from the conventional political misconduct. He was not, and never would be, indebted to Tammany Hall Democrats. His allegiance was to the people and the people alone.

East Harlem was also a community in great need—East Harlemites clamored for political leadership that would fight to alleviate the ills plaguing it, from rampant poverty to a housing affordability crisis. They hoped García Rivera would do his part in the Assembly. And that he did.

When asked by La Prensa’s Antulio Rodriguez Castillo what legislative agenda he would take to Albany, García Rivera responded straight-forwardly, clearly showing that the progressive philosophy he ran on was not mere rhetoric, but rather stemmed from a deep belief that a progressive agenda was exactly what would benefit the poor of East Harlem.

García Rivera’s first order of business was to introduce an affordable housing bill that aimed to restrict the ability of landlords to raise rents arbitrarily. It is rather ironic that 85 years after García Rivera’s election, East Harlem and indeed the city as whole face a major housing affordability crisis (and there is fierce debate over a bill in Albany that would cap rent increases).

García Rivera also sought to root out the corruption prevalent in city politics, which he felt contributed to the crises plaguing areas like East Harlem. Perhaps his idealistic views about what good government could do were balanced with some political realism—taking on corruption in government would continue to help weaken an already declining Tammany Hall, which would surely help his re-election efforts.

García Rivera promised to work with Mayor La Guardia’s administration and newly-elected Manhattan District Attorney Dewey, to root out corruption in government. According to García Rivera, Dewey, who would later become governor and the Republican nominee for president in 1948, promised to work with him on such efforts. It could be said that Dewey lived up to his promises since he went on to prosecute Tammany Hall boss James Joseph Hines on racketeering charges.

García Rivera was successfully re-elected in 1938. His second winning political campaign was not just a result of the debilitation of Tammany Hall; García Rivera also had a solid record to run on.

In just one year, he introduced a number of bills supported by progressives. More importantly, these bills were seen as a powerful message to the people of East Harlem that their community finally had an elected leader that prioritized their needs and not those of Tammany Hall. García Rivera introduced an anti-discrimination bill that would fine employers for refusing to pay workers because of race. In 1938 he introduced a civil rights bill (almost 30 years before the passage of the 1965 federal Voting Rights Act), and as promised, he introduced the aforementioned legislation that would limit the right of landlords to raise rents arbitrarily. In an address to residents in his community, García Rivera said the bill would be a “deterrent to greedy landlords” and would “protect the tenants in the low income bracket.”

With this record, García Rivera was ready for his re-election battle. This time, however, his enemies were not just limited to Tammany Hall Democrats. The Republican County organization, which had backed him just one year earlier, denied García Rivera the nomination in 1938 (Assembly elections were yearly then). The New York Times called it “an unusual political move.” García Rivera likened it to yet another Tammany Hall hit job.

Two years later, dynamics would shift drastically for García Rivera and the burgeoning East Harlem Puerto Rican community. Redistricting efforts significantly altered the 17th Assembly district and as a result, Democrat Hulan Jack beat García Rivera by 3,150 votes in 1940. García Rivera’s defeat also spelled temporary doom for Puerto Rican representation, as no Latinos were elected to any office for more than a decade.

Interestingly enough, during this void in Puerto Rican political representation a non-Puerto Rican, Congressman Vito Marcantonio, would go on to champion the cause of Puerto Ricans in New York and those on the Caribbean island.

The lack of Latino political representation after García Rivera’s defeat was not a reflection of any decline in the Latino population of New York. In fact, the very opposite was occurring. As the ‘40s gave way to the ‘50s, the growing number of Puerto Ricans in New York would increase by over 300%, from a little under 60,000 in 1940 when García Rivera was defeated to almost 300,000 by 1950. These New York City statistics in all likelihood underestimate the real picture of Puerto Rican migration at the time. By 1956, just six years later, an additional 300,000 Puerto Ricans had arrived in the city. (My parents were two of these 300,000; my father arrived in East Harlem in 1955 and my mother came to the same community in 1956.)

In 1953, Felipe Torres, a 56-year-old attorney and graduate of Fordham Law School, was elected to the State Assembly, becoming the first Latino elected in the borough of the Bronx. Interestingly, the Torres family became prominent not only in political circles but also within the legal profession. After his stint in the Assembly, Felipe Torres was appointed a Family Court judge. His son Frank succeeded him in the Assembly and was also later appointed a judge. Felipe’s granddaughter, Analisa Torres is currently a federal judge, appointed by Barack Obama in 2013. (I was honored to help Analisa Torres in 1998 during her successful run for Civil Court judge in Manhattan.)

By the time Felipe Torres was elected, there were more Puerto Ricans in the Bronx than in East Harlem. Yet, East Harlem was the place that Puerto Rican political power would flourish first. In 1954, the last of the Tammany Hall bosses, Carmine DeSapio, appointed Tony Mendez as a district leader in East Harlem. Thus, Mendez became the first Latino Democratic district leader in New York history. Twenty-four years later, in 1978, his daughter-in-law Olga Mendez became the first Latina elected to a State Legislature in U.S. history. Tony Mendez founded the Caribe Democratic Club, which remains in existence today and is headed by an East Harlem community activist, Raul Reyes.

Mendez knew how to work DeSapio in order to increase Puerto Rican representation at all levels of government. Largely through Mendez’s efforts, Emilio Nunez, a member of his club, was elected to the City Court in 1956. Another Caribe Club member, Jose Ramos-Lopez was appointed to the Workmen’s Compensation Board. Manuel Gomez became deputy commissioner in the Magistrate’s Court. By the end of the decade, Ramos-Lopez was elected to the State Assembly, becoming the third Puerto Rican elected to the State legislature in New York history.

That would soon change in the 1960s when Herman Badillo entered the picture and became a political hero for Puerto Ricans in New York.

***
Eli Valentin is a political analyst and author of the forthcoming book, Reinhold Niebuhr: A Political Life. On Twitter @EliValentinNY.

***
Have an op-ed idea or submission for Gotham Gazette? Email This email address is being protected from spambots. You need JavaScript enabled to view it.