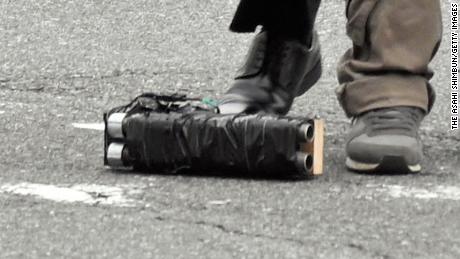 Abe, 67, was pronounced dead by doctors at the Nara Medical University Hospital, at 5:03 p.m local time on Friday, just over five hours after being shot while delivering a campaign speech in front of a small crowd on a street.

Tetsuya Yamagami, 41, admitted to shooting Abe, Nara Nishi police said during a news conference on Friday. Yamagami, who is unemployed, told investigators he holds hatred toward a certain group that he thought Abe was linked to.

Police have not named the group.

Yamagami is being investigated as a “suspect for murder” in a case to which 90 investigators have been assigned, according to police.

He was taken to the Nara District Prosecutor’s Office on Sunday morning.

Yamagami was described as a “totally normal” and seemingly “earnest” person by at least two people who had interacted with him, Japan’s Kyodo News Agency reported.

He was hired through a dispatch agency in October 2020 to work at the freight department of a factory in Kyoto prefecture, Kyodo News Agency reported, citing an unnamed “former senior colleague”.

The former colleague characterized Yamagami as someone who kept to himself.

“If it was work talk, he would respond, but he didn’t go into his private life. He seemed mild-mannered,” the former colleague said, according to Kyodo News Agency. The former colleague added that Yamagami would “eat lunch alone in his car” and that “conversations with him never strayed beyond the topic at hand.”

The former colleague said there had been no issues with Yamagami for the first six months of his employment, until he started to exhibit “gradual neglect” of work practices, according to Kyodo News Agency.

In March, Yamagami started taking “unauthorized time off” and spoke of “heart issues” and other physical problems, despite having no previous issues with punctuality or attendance. His employment ended on May 15, the agency reported.

An unnamed employee at the dispatch agency who interviewed Yamagami for the job described him as “totally normal,” but added that he “didn’t say much” and “had a slightly gloomy sense to him,” according to the Kyodo News Agency.

What kind of gun was fired?

The suspect used a homemade gun in the shooting, police said, and images from the scene showed what appeared to be a weapon with two cylindrical metal barrels wrapped in black tape. Authorities later confiscated several handmade pistol-like items from the suspect’s apartment.

The weapon was a gun-like item that measured 40 centimeters (about 16 inches) long and 20 centimeters wide, police said.

Yamagami made multiple types of guns with iron pipes that were wrapped in adhesive tape, Japan’s public broadcaster NHK reported, citing the police. The police found guns with three, five, and six iron pipes as barrels.

The suspect inserted bullets in his handmade gun, parts of which he had bought online, police said, according to NHK. Police believe the suspect used the strongest weapon he made in the assassination, NHK added.

What was the suspect’s plan?

The suspect told investigators he initially intended to kill Abe by using explosives, according to Japan’s Public Broadcaster NHK.

Yamagami originally planned to assassinate Abe at an event in Okayama, a prefecture about three hours’ drive from Nara, NHK reported.

“I was thinking about killing the former prime minister there (Okayama), but I saw that there were admission procedures at the entrance and I felt it would be difficult to get in”, he told investigators, according to NHK.

Nara police told CNN on Saturday that surveillance footage showed Yamagami leaving the Yamato-Saidaiji Station in Nara on Friday after arriving by train.

How have security forces reacted?

At the time of the shooting, Abe was speaking in support of ruling Liberal Democratic Party (LDP) candidates ahead of Upper House elections on July 10. Despite resigning as Japan’s prime minister in 2020 due to health reasons, Abe remained an influential figure in the country’s political landscape and continued to campaign for the LDP.

Japan’s National Police Agency said it will review security arrangements put in place before Friday’s shooting, according to NHK. Security was being handled by Nara prefectural police, which drew up a security plan for the former prime minister while he was in the city.

The agency said several dozen officers and security personnel from the Tokyo Metropolitan police were on duty and had reportedly watched Abe from all sides during his speech, NHK said.