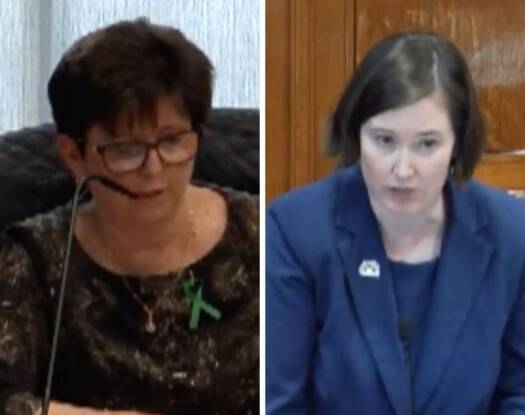 Lindsey Leitko is relieved to be graduating high school next month.

The last few years have been hard for the Doherty High School student. She has anxiety and depression, partially stemming from her parents’ divorce, and has been hospitalized three times in the past year over concerns she would take her own life.

When Leitko gets anxious while at school, she often visits an on-campus mental health counselor to calm down and talk things out. But Leitko says throughout her high school experience, the counselor has often been busy with other students and she usually waits a while before being seen.

“Just a few weeks ago, I was in crisis, and I was struggling with urges to hurt myself. And just waiting that hour and a half made it worse,” Leitko said. “If you’re really in crisis and you need to speak with someone, then you should be able to get right in.”

It’s a familiar refrain from students in Worcester Public Schools, who say the district does not have enough counselors, psychologists and other resources to help them cope with mental health struggles. Members of Worcester’s Public School Committee have recently raised similar concerns and called for the district to expand mental health resources in schools. But outgoing Superintendent Maureen Binienda has pushed back, arguing that students are receiving the help they need.

The disagreement between the superintendent and committee members comes at an especially trying time for students, parents and school staff.

The American Association of Pediatrics, Children’s Hospital Association and American Academy of Child and Adolescent Psychiatry have declared a national emergency in children’s mental health and are calling on government officials to increase funding and other supports. The coalition of pediatric health experts said adolescents’ mental health was already steadily declining over the past decade, but during the COVID-19 pandemic, grief, stress and depression among children have soared.

“The whole universe is telling us we have a larger issue,” Worcester School Committee Member Tracy O’Connell Novick said. “I know that the schools need more resources.”

O’Connell Novick said she regularly hears from students, parents and staff who are dissatisfied with the district’s response to the mental health crisis. Worcester schools need more psychologists and school adjustment counselors who specialize in mental wellness, she said, adding that kids should not have to wait in long lines to receive counseling.

Kim McLaren, a psychologist with the district, agrees. She said staff are often overwhelmed with students who are experiencing mental health emergencies that take disruptive forms, such as temper tantrums and fighting. The resource shortages prevent teachers and counselors from helping other students who are anxious and depressed but aren’t affecting other students or staff. McLaren wishes staff could be less reactive and more proactive.

“It’s very frustrating,” she said. “We’re all so busy putting out fires. We need to be able to go into the classrooms on a daily basis to teach students coping skills, emotion regulation skills, social skills.”

Mental health concerns in schools reached a climax during a Worcester School Committee meeting earlier in May.

The superintendent’s staff presented a report showing that the number of Worcester students referred to a local youth intervention crisis service this year was roughly the same as the year before the start of the pandemic. Binienda said the district is doing as much as it can to help students’ mental health.

“Yes, in every school you might have one or two students who are experiencing some emotional challenges,” she said. “Every district is struggling with students that are having some difficulty. … We’re not up in fire.”

Her comments during the meeting prompted fiery responses from some committee members. O’Connell Novick and Jermaine Johnson suggested the district’s data doesn’t account for children who struggle with mental health but haven’t been referred to emergency services, and added the district potentially needs more than four new counselors.

“It is truly, truly disappointing to me that this is the answer that we’re getting,” O’Connell Novick said during the meeting. “If we don’t admit that we actually have mental health issues in our schools, then we can’t actually work to repair them.”

Next steps for the district

Binienda will retire in June, and her successor, Rachel Monárrez, recently told GBH News she’ll make students’ mental health a priority when she takes over July 1.

Still, the next few weeks of Binienda leading Worcester’s schools will have lasting effects as the district works to finalize a budget for its next fiscal year. The budget could include funding for more mental health counselors, psychologists and other efforts to help improve student’s mental wellness.

O’Connell Novick said Binienda also has time to implement some emergency measures to immediately help students struggling with mental health. They could include creating a temporary safe space on school campuses where students can calm down if they’re experiencing a mental health challenge.

“You could take the resources that we have and potentially reallocate them at least to get through the rest of the school year,” O’Connell Novick said. “Any day can be too many days for a kid who’s going through a mental health crisis … in particular, kids who are on the verge of hurting themselves.”

GBH News spoke with Binienda, who insisted there’s no emergency.

“Students aren’t waiting too long for help in schools,” Binienda said. “Schools are addressing the needs of students.”

Mars is a Worcester student who’s witnessed the difference that more mental health resources in a school can make. GBH News isn’t including Mars’ full name due to the sensitivity of his experiences.

Mars is a victim of sexual assault. He experiences anxiety and depression, and has a doctor-approved school accommodation that lets him take 10-minute breaks from classes when he’s overwhelmed. At South High Community School, he said teachers and administrators routinely chastised him if his breaks were a few minutes over time. And he said he rarely received support from mental health counselors because lines of students waiting to speak with them were common.

“It was really upsetting,” Mars said. “I was helpless to get any change made or to get any support.”

A couple months ago, Mars transferred to Gerald Creamer Center, an alternative high school that serves vulnerable students who’ve previously dropped out or have behavioral or emotional challenges. Mars said Gerald Creamer has been more flexible when he needs to step out of class and has given him more access to counseling. He wishes more schools in Worcester could be like that.

“It’s been fantastic,” he said. “[Gerald Creamer is] able to really take care of each student and make sure that we are genuinely doing OK.”

If you or someone you know is having thoughts of suicide, please call the National Suicide Prevention Lifeline at 800-273-TALK (8255) or use the Crisis Text Line by texting “Home” to 741741. More resources are available at SpeakingOfSuicide.com/resources.