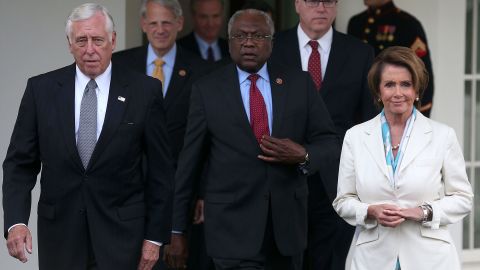 The top three House Democrats who are stepping back from their leadership spots did not coordinate on their decisions to do so, outgoing Majority Leader Steny Hoyer said Sunday, adding that “the timing was right.”

“Have you heard I was 83?” Hoyer quipped about his age in an interview with CNN’s Dana Bash on “State of the Union.”

Hoyer’s departure from his leadership post, as well as the decisions by Nancy Pelosi and Jim Clyburn, both 82, to step down as House speaker and majority whip, respectively, represent a generational change for the Democratic Party in the chamber.

“I think all of us have been around for some time and pretty much have a feel for the timing of decisions. And I think all three of us felt that this was the time,” Hoyer told Bash.

Hoyer noted that the trio has led the House Democratic Caucus “for a long time.”

“In that capacity, I think each of us made an individual decision. The timing was right,” he said.

House Democrats chose current Caucus Chair Hakeem Jeffries of New York, 52, to replace Pelosi as top Democrat in the chamber. Massachusetts Rep. Katherine Clark, 59, who will serve as minority whip, and California Rep. Peter Aguilar, 43, who will lead the caucus, are a generation younger than their predecessors.

The octogenarians, however, are still expected to have a presence in the incoming Congress. Clyburn will serve in a slightly demoted leadership role as assistant leader (the party’s No. 4 position), while Pelosi was recently designated “speaker emerita.” Hoyer said Sunday that he expects to still advise the new Democratic leaders.

“Mr. Jeffries and I have talked. I think he wants me to continue to give advice and counsel and to be involved in decision making – albeit not as majority leader,” the Maryland Democrat told Bash.

Reflecting on his career in leadership, Hoyer praised two people who he said will be remembered by history as giants: the late civil rights icon and longtime congressman John Lewis and Pelosi.

He added: “And I think she’s probably the most effective political leader that I’ve worked with over the years.”

Reminiscing on interning with the Baltimore-born Pelosi in the office of Maryland Rep. Daniel Brewster in the 1960s, Hoyer told Bash: “I think that story doesn’t get enough play.”

“Nancy was sitting in the front office as receptionist, and I was sitting right behind her in sort of a little divided half wall handling academy appointments, opening mail, doing things that interns do or part-time employees do, and we were there together. Some 40 years later, we became the speaker and the majority leader,” he said.

The two lawmakers, however, have not always had a straightforward relationship.

Hoyer remarked that he was “obviously disappointed” when Pelosi endorsed Pennsylvania Rep. John Murtha over him to become majority whip in 2006, though Hoyer won that race “pretty handily,” he recalled.

Asked whether he would’ve liked to have become speaker had Pelosi not been in the picture, Hoyer replied: “Who wouldn’t? What politician in the House of Representatives would not like to be the speaker? Of course, I would.”

“But very frankly, as I remarked to one reporter, I said I’m not sure I could have done a better job than Nancy and maybe not as good a job as Nancy,” he told Bash.