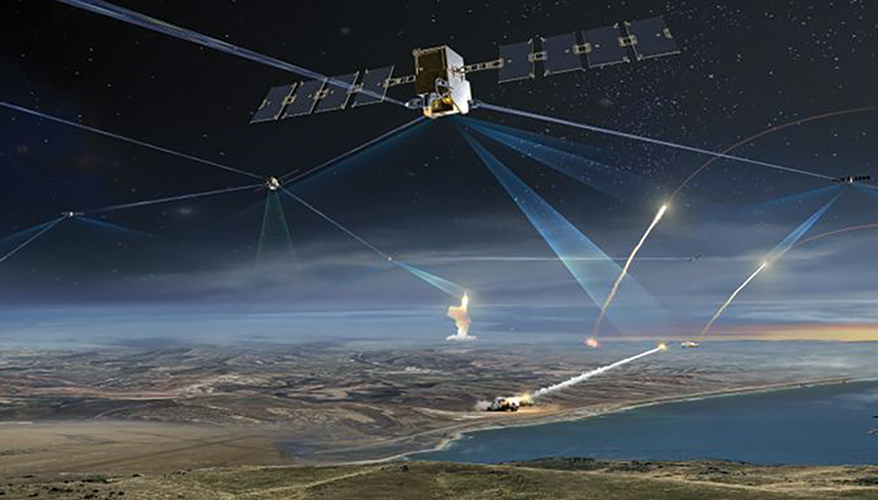 Threats that can’t be seen can’t easily be defeated — and if that threat is traveling at Mach 5, there are only minutes to make a decision.

Competitors already have operational hypersonic missiles — which have been demonstrated in the Russian invasion of Ukraine and the reported Chinese launch of a hypersonic glider off the Taiwan Strait — making the ability to detect and defeat such weapons a top priority for the Defense Department. Fortunately, there are efforts underway to do just that.

The Space Development Agency recently announced awards to L3Harris Technologies and Northrop Grumman to deliver 28 infrared-sensing satellites for a constellation referred to as the Tranche 1 Tracking Layer. This layer, designed for advanced missile warning and missile defense, is part of the larger national defense space architecture that will deliver sensing and data transport capability with a proliferated constellation of satellites in low-Earth orbit.

Proliferation is the key; an architecture of hundreds, or even thousands, of small satellites orbiting at altitudes less than 2,000 kilometers will provide better resiliency against incoming threats. Simply put, by increasing the number of targets, an adversary’s chances of success against the whole network will be significantly reduced.

The agency has also argued convincingly that a mesh network in low orbit is more cost-efficient and easier to deliver and replace than current defense assets operating in higher orbits. Low-Earth orbit offers other advantages for space-based observation, as the closer proximity to Earth provides higher-resolution imaging for remote sensing.

Each tranche of the satellites will be delivered in two-year cycles, building on the capabilities of the previous iteration. Tranche 1 satellites are planned to launch in fiscal year 2024 and will be equipped with four optical inter-satellite links to enable high-speed communication and data exchange through point-to-point optical beams. These cross-links will allow the satellites to locate and track one another, forming a highly secure space-based communication network.

Advancements in infrared sensor technology being championed by the agency also promise enhanced resolution imaging. As noted in a June report from the Center for Strategic and International Studies, “Boost-Phase Missile Defense” by Ian Williams, Masao Dahlgren, Thomas G. Roberts and Tom Karako, multiband/multi-megapixel focal plane arrays can be used to develop high-resolution or wide field-of-view infrared cameras. With their increased sensitivity, these sensors can enhance missile detection and reduce tracking delays.

If deployed in sufficient numbers, SDA’s satellites will provide persistent coverage and improve missile warning, tracking and cueing of data — exactly what is needed for hypersonic defense.

“The Tracking Layer is going after a very specific warfighter problem, which is next-generation advanced missiles. So, we’re going to contribute to the hypersonic fight,” Frank Turner, SDA technical director, said in the “Constellations” podcast produced by Kratos Defense.

“We’re going to contribute to warning, tracking and defeat of the advanced missiles that our adversaries are developing and deploying that will change the 21st century battlefield completely,” Turner added.

The Missile Defense Agency, in conjunction with the Space Force, will begin orbiting the Hypersonic Ballistic Tracking Space Sensor demonstrators next year. It will employ a medium field-of-view capability to provide even greater sensitivity and accuracy once a launch is detected.

The Missile Defense Agency is considering the inclusion of cross-links on future iterations of the system to communicate with Space Development Agency satellites. This is a necessary capability for meeting the looming hypersonic threat, according to a June Government Accountability Office report, “Missile Defense: Better Oversight and Coordination Needed for Counter-Hypersonic Development.”

The Defense Department’s fiscal year 2023 budget request includes $24.7 billion for missile defeat and defense, described as a part of the national strategy for integrated deterrence. Of that, $4.7 billion is for space-based missile warning and tracking architectures. Included are the Space Force’s new Resilient Missile Warning Missile Tracking system — consisting of the Space Development Agency’s tracking layer and a medium-Earth orbit constellation developed by Space Systems Command — as well as the Next-Generation Overhead Persistent Infrared program, which succeeds the current Space-Based Infrared System and will provide improved early warning and battlespace awareness capabilities.

Both the House and Senate appropriations committees approved the request largely unchanged but expressed a need for further information on expected costs, capabilities and potential risks. The Senate also wisely recommended additional funding to expand the Space Development Agency missile tracking program and to procure four additional launches for Tranche 1.

Space assets play a vital national defense role, especially for countering the ever-growing threat of future high-speed weapons. The persistent and resilient integrated space sensor network being built today is a critical first step in responding to and countering a very serious challenge. The Space Development Agency and its partners must be allowed to continue down this path while others develop the means to stop these missiles once they’re detected.