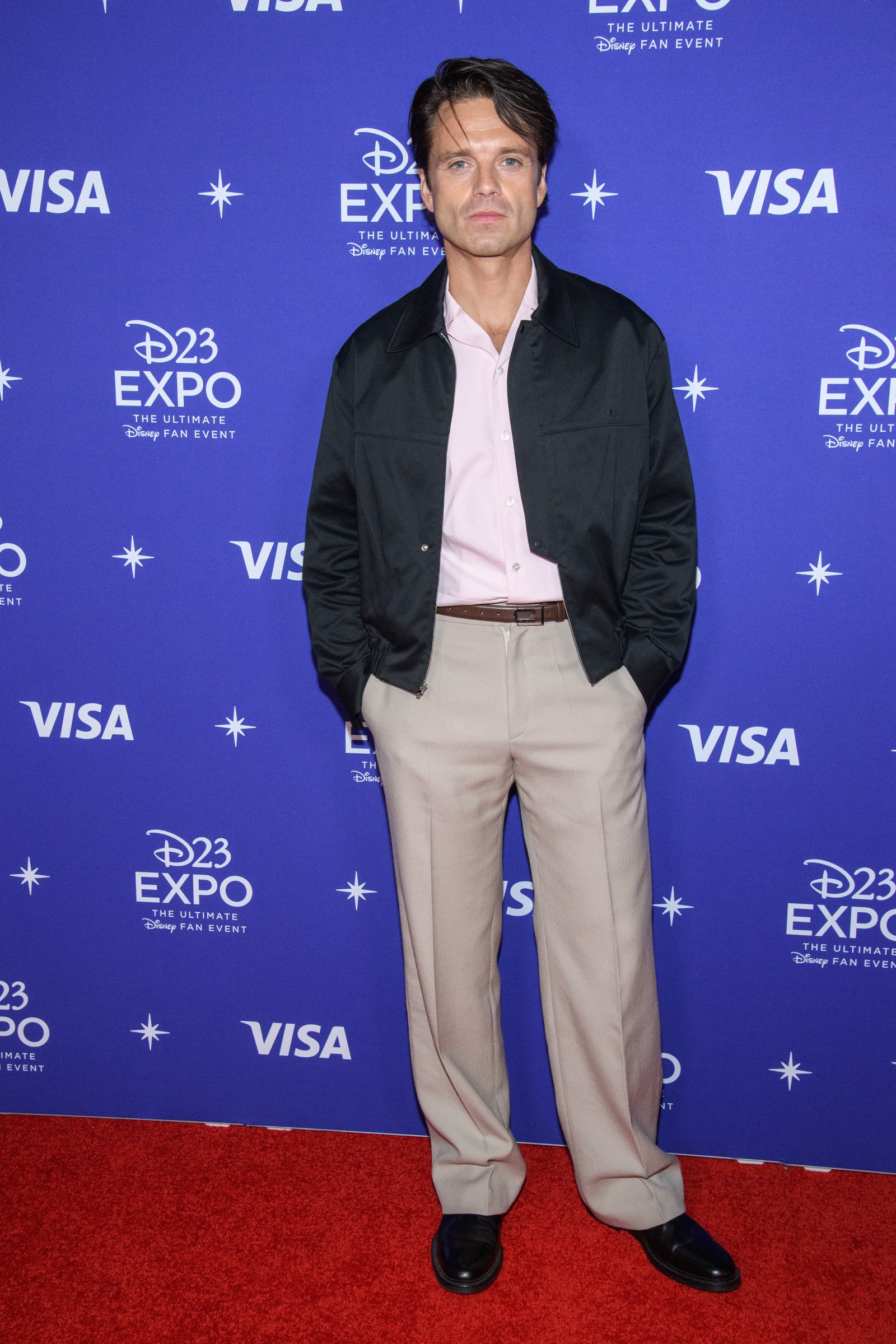 Sebastian Stan is sort of a red carpet wild card.

He might show up to a movie premiere in a baggy Hermès suit with a turtleneck and a freshly buzzed fade. He might attend the American-Gilded-Age-themed Met Gala wearing head-to-toe Pierpaolo Piccioli pink. Or he might go to an IP-spanning Disney convention in a pair of pleated khaki pants, powder-pink shirt, and sporty bomber jacket—which is, incidentally, exactly the kind of outfit that my cool high school English teacher who had us read Joseph Conrad’s Heart of Darkness and then watch Francis Ford Coppola’s Apocalypse Now used to wear.

Stan, who plays Bucky Barnes in the Captain America corner of the Disney-owned Marvel Cinematic Universe, attended the D23 Expo in Anaheim over the weekend, where he was joined onstage by his franchise-mates David Harbour and Wyatt Russell, both of whom were dressed how regular famous guys dress these days (tonal blue suits). And while Stan’s outfit may have appeared slightly managerial on the surface, it was actually a full designer look from the New York-based label Commission, maker of thoughtfully classic pieces replete with subtly freaky, even sometimes kinky, details.

“It is very much ‘dad vibe’ but then the proportions are actually pretty young,” said Jin Kay, one-third of the designer trio behind Commission, of Stan’s outfit, speaking by phone earlier this week. (When the brand started making menswear last year, Kay and his co-designers, Dylan Cao and Huy Luong, were inspired by corporate uniforms and 1970s Japanese workwear, thus implicating at least some portion of what actual real-life dads wear.) By that property, Kay agreed, Stan’s look turns into “hot dad.”

What distinguishes the luxury here is the particulars: a bit of placket jutting out from an SSENSE-exclusive cotton bomber jacket, giant carpenter-pant-style pockets and loops hidden on the back of the pleated khakis. Typically, in photos for lookbooks and e-comm platforms, Commission’s pieces get styled like most contemporary brands’ do—slouchy and oversized, polish meets grunge. Take the unisex poplin uniform shirt Stan wore, which can be boxy in a skater-boy way, or fitted in a dad (or English teacher) way. And there you have it—the duality of man.