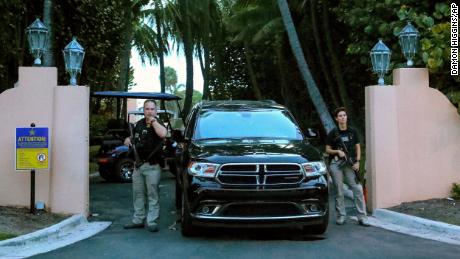 Uproar over the search three weeks ago has thrust Trump, who has teased a 2024 campaign, back into the center of a midterm election cycle already rocked by the Supreme Court’s overturning of the right to an abortion — one factor that has given Democrats new hope of staving off a Republican red wave in November.
While President Joe Biden has avoided expansive comment over his predecessor’s legal situation or the investigation, he is now trying to make the midterms a choice between himself and Trumpism, instead of a referendum on his own performance. The President blasted the ex-President’s “Make America Great Again” philosophy last week as “semi-facism” in comments that raised the political heat ahead of a hugely consequential fall.
The redacted affidavit showed that 184 documents bearing classification markings were retrieved from Trump’s Florida resort at Mar-a-Lago in January. This is in addition to 11 sets of documents, some bearing the designation “top secret/SCI” — one of the highest levels of classification — taken by the FBI after the search of the property earlier this month. The affidavit, which was used to convince a judge of probable cause that a crime had been committed, also showed the bureau expected to find evidence of obstruction. Large sections of the document were blacked out to protect FBI agents, witnesses and the future prospects of the investigation.

The affidavit and other legal documents show evidence of a long-term effort, well before the August 8 FBI search, by the Department of Justice to get back documents that Trump had taken from the White House and that should have been in the National Archives.

But Republicans have capitalized on the multiple redactions that cloaked the full reasons for the subsequent FBI warrant and search, to fuel the sense of uncertainty and to accuse the bureau and Attorney General Merrick Garland of overreaching.

New Hampshire Gov. Chris Sununu told CNN’s Dana Bash on “State of the Union” on Sunday that the DOJ should give Americans more information about the kind of secret documents that were at Trump’s residence and why they felt compelled to take the politically explosive step of mounting a search.

“My biggest criticism, and I think the concern of most of the country, is, where’s the transparency, right?” the GOP governor said. “If you’re going to take unprecedented action and raid a former president’s house, well, you better have a strategy for unprecedented transparency,” added Sununu, who’s running for reelection this fall.

“You got to be able to show your cards when you’re taking actions like this.”

The criticism of the department by Sununu was significant and may reflect broader Republican opinion because he hasn’t shirked from criticizing Trump in the past. He’s insulated to some extent from the ex-President’s thirst for vengeance thanks to his popularity in the Granite State, where he rebuffed national GOP entreaties to run for Senate. But Sununu nevertheless implied that election season politics might have been behind the DOJ’s decision to go ahead with a search.

“We think this is a coincidence, just happening a few months before the midterm elections … and all that sort of thing?” Sununu asked. He also called on Biden to apologize for his “semi-facism” comment.

One senior Republican senator, Roy Blunt of Missouri, said that Trump should have turned over documents that should legally have been transferred to the National Archives as he left office. And he said officials should be especially careful handling classified material. But in his comments on Sunday, Blunt also betrayed the political pressure Republicans feel to stand with Trump, the dominant figure in their party, even though the Missouri senator is retiring at the end of this year.

“What I wonder about is why this could go on for almost two years and less than 100 days before the election, suddenly, we’re talking about this rather than the economy or inflation or even the student loan program,” Blunt said on ABC News’ “This Week.”

As well as suggesting nefarious activity by the Biden administration, Blunt’s comment hinted at GOP frustration that their attacks on Biden are being somewhat overtaken by Trump’s return to the spotlight. But the idea that the search was simply cooked up to distract from the President’s low approval rating is belied by the evidence of court documents and other material about the case, which suggest months of efforts to get the classified material back from Trump amid his delays and refusals to hand it over. The White House has said Biden had no advance warning of the search, stressing the priority he’s placed on making the Department of Justice independent.

Still, it remains difficult for outsiders to make a full evaluation of whether the DOJ overreached or if it properly considered the enormous implications of searching the home of an ex-president and potential future White House candidate — given the high-level of secrecy surrounding the case because of the classified material involved. The relative lack of information has offered a vacuum that Trump and his acolytes have filled with misinformation and conspiracy theories, which is now being used by more mainstream Republicans to cast doubts on the DOJ’s conduct.

The next courtroom drama over the search will come on Thursday in a hearing called by a federal judge to hear Trump’s demand for an independent “special master” to filter the material taken by the FBI to see whether it contains legally privileged materials.
US District Judge Aileen Cannon asked the Department of Justice to file a public response by Tuesday and also to file under seal records going into greater detail about what was taken in the search. She said on Saturday she had a “preliminary intent” to grant Trump’s request, but added at the end of the order that it should not be construed as her final decision on the matter.

The fact that Cannon, a Trump nominee, gave an indication she might grant his request has been greeted by some of the ex-President’s allies on social media as a victory. But such a move is not considered unreasonable by legal experts in a case like this. The curiosity here is that Trump did not make his request until the government had been in possession of the documents the FBI took from Mar-a-Lago for two weeks — a factor that has raised questions about chaos within his camp, his strategy and the quality of his legal representation, which had been ordered to submit a new filing after the judge identified several shortcomings in the initial request.

The furor over the documents comes as Trump’s exposure to various probes appears to be growing. His inner circle has been drawn into a criminal investigation in Georgia centering on his alleged attempts to overturn Biden’s victory in the crucial swing state in 2020. The House select committee investigating the January 6, 2021, insurrection has painted a damning picture of the ex-President’s conduct on one of the darkest days in modern US history and is expected to soon ramp back up its hearings. And there are several civil and criminal probes looking into Trump’s business empire.

This all comes with the former President seeking to elevate midterm candidates who buy into his falsehoods about a stolen election in 2020 — a mostly successful run that may have saddled the GOP with problematic candidates who could give Democrats a chance to cling to their Senate majority. This trend, along with some recent wins by congressional Democrats — including the passage of Biden’s big health care and climate bill — and the Supreme Court’s move on abortion, have given fresh hope to Democrats as November looms.

Still, first-term presidents’ parties generally do poorly in midterm elections, especially with approval ratings around 40%, as Biden’s are. So while the 2022 elections may be more competitive than expected, history suggests that they will threaten Democrats’ monopoly on political power in Washington.

The political and legal shock waves surrounding the Mar-a-Lago search will play out this week as a behind-closed-doors investigation into the potential national security questions raised by Trump’s apparently cavalier treatment of classified material gathers pace. Director of National Intelligence Avril Haines has sent a letter to the House Intelligence and House Oversight committee chairs, saying the intelligence community is conducting a damage assessment of the documents taken from Trump’s home, according to a letter obtained by CNN on Saturday.

The classification review is being carried out by the Department of Justice and the Office of the Director of National Intelligence, Haines wrote in the letter first reported by Politico. House Intelligence Chair Adam Schiff and House Oversight Chair Carolyn Maloney said in a joint statement that they were “pleased” that Haines has launched the damage assessment of classified documents found at Trump’s home in Florida.

The two chairs, who had previously called for the inquiry, pushed for the assessment to move “swiftly.”

Given the sensitive nature of the material under discussion, it appears unlikely that the review will do much to add to the public’s understanding of the extraordinary circumstances of a search of a former president’s home.

That means that the political fallout from the operation is only likely to take on a more extreme cast as the midterm elections approach and is likely to further deepen the nation’s divides over Trump, which he is managing to further widen even while out of office.

Julia Fox has a ‘small mouse problem’ in her apartment | Entertainment

At a Va. union hall, Biden to tout accomplishments, take aim at GOP – The Washington Post