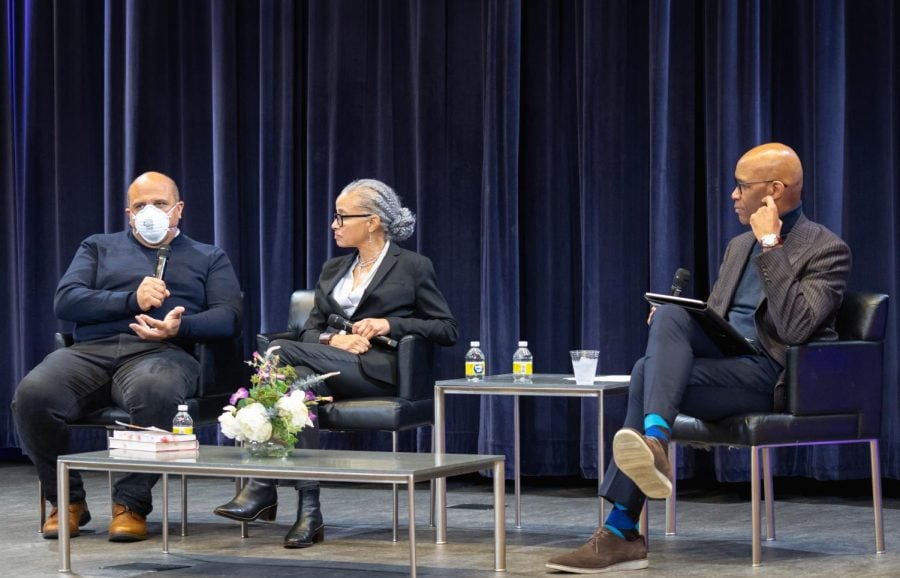 Moderated by Medill Dean Charles Whitaker, the panelists discussed Thrasher’s book, “The Viral Underclass,” and Villarosa’s book, “Under the Skin.” Both books were authored at similar times and highlight systematic health impediments against marginalized communities.

“Often viruses, which are inherently social and which connect socially are blamed on one person, as if they don’t exist anywhere else,” Thrasher said. “It’s really important for media coverage to reflect that reality … and give people an ability to come forth safely without thinking they’re going to be shamed.”

“Under the Skin” explores the racial biases held in the health system, especially against Black women. In 2020, the maternal mortality rate for Black women was almost three times the rate for non-Hispanic white women, according to the Centers for Disease Control and Prevention.

Villarosa discussed how Black diabetes patients are more likely to become amputees than their white counterparts.

“I don’t think that healthcare providers go into their profession to do harm,” Villarosa said. “But someone is making these unequal treatment decisions.”

Villarosa said these problems are often structural, with policies that perpetuate redlining and the poverty cycle. Skewed media coverage can also exacerbate these issues, she added.

Thrasher said a journalistic focus  on an “individualized narrative” rather than a systemic one inadvertently increases the stigma against underrepresented communities. All three professors agreed that health reporting still disproportionately focuses on individual cases and their experiences, rather than delving into the systemic roots of the problem.

“Naming those bad practices is helping the media realize what our complicity has been in perpetuating those stereotypes and not digging beyond the surface,” Whitaker said of Thrasher’s perspective. “I certainly think we have the capacity to change it.”

The panelists also opened the floor to audience questions. English prof. Sarah Schulman asked if Villarosa had applied her line of research to Black gay men, and if class impacted these patterns.

While Villarosa said her work has not yet explored the matter, her anecdotal research has indicated Black gay men receive similiar quality of health care regardless of class.

In her time teaching medical students, Villarosa said she realized many need a wake-up call to recognize the systemic issues within the profession. But she added that individuals are also sometimes the ones perpetuating these inequalities.

“I feel bad when I’m speaking sometimes at medical schools saying, ‘Well, here are these 483 studies saying something is happening in the hospitals where you work,’” Villarosa said. “This is implicit bias that is happening in individual people no matter who you are.”