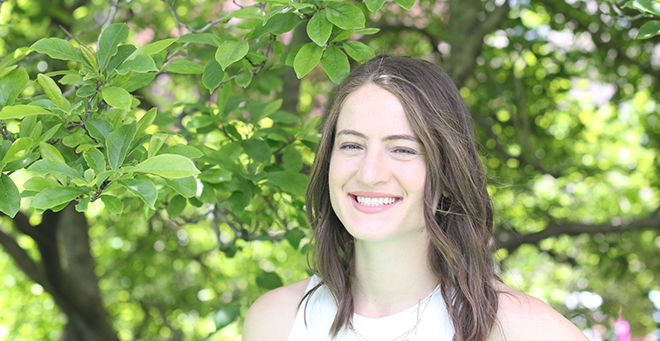 Kodiak Soled, PhD, vice president of the Lesbian Health Fund at GLMA: Health Professionals Advancing LGBTQ+ Equality and a postdoctoral research fellow in the Department of Population Medicine at Harvard Medical School and Harvard Pilgrim Health Care Institute, presented, “Fighting for our families: A community-placed study of LGBTQ+ childbearing hardships, harms and hope for a brighter future,” on Wednesday, June 29. The event, sponsored by the Diversity and Inclusion Office, was in celebration of Pride Month.

Dr. Soled researches perinatal and reproductive health disparities among LGBTQ+ families. She discussed her research and identified ways to support these families.

“Sexual and gender diverse people are a small but growing population in the U.S.,” said Soled.

Through her qualitative work, Soled shared that, “systemic invisibility which describes the pervasiveness of heteronormative assumptions are the norm,” and a common theme in the experiences of LGBTQ people as they work to form families.

“Stigma surrounding gender and gender roles result in not being considered a real parent,” she said, adding that they also cause anxiety and trauma for families. Positive themes of resiliency, social support, acceptance, safety and inclusion through the information and knowledge around health care that providers have obtained help to combat negative experiences sexual and gender diverse people experience.

In addition to discussing the negative impact of the recent U.S. Supreme Court decision to overturn Roe v. Wade on LGBTQ families, Soled talked about the pending threat to dismantle LGBTQ family units if other landmark decisions, such as the 2015 ruling that established the right to same-sex marriage, are overruled.

She encouraged participants to consider policies, resources and culture, specifically around family formation, at their own institutions.

“Does your company provide benefits for adoption, but not assisted reproductive technologies? Are they offering family leave only for gestational carriers, but not non-gestational parents? If these types of policies do exist, are they only restricted to partners that are married? Does your HR know how to process these policies for various types of sexual and gender diverse parents?” Soled asked.

Soled called for more opportunities to present research such as hers to diverse audiences to increase awareness on the challenges LGBTQ families face.

Driver Kills 1 and Injures 17 at Pennsylvania Benefit, Then Kills Another, Police Say

The 24 Best Bikinis, According to a Swimwear Connoisseur