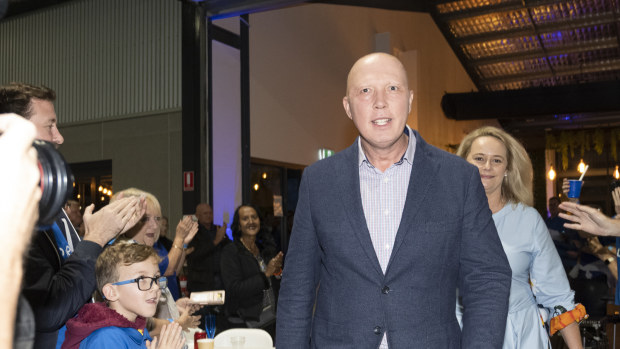 But it’s even harder to imagine any moderate becoming leader now the obvious alternative of Josh Frydenberg has been swept away on the same high tide of disillusion, particularly female disillusion, with the Liberals under Morrison.

The Coalition will swing to the right

The Liberals never expected the teal wave of women to be so lethal for them across so many seats in NSW and Victoria and even one in WA.

The effective wipe-out of most Liberal moderates means the balance of power in the remaining Coalition has swung to Liberal conservatives and the National Party, skewed to still relatively strong representation in Queensland.

That’s even though Morrison’s willingness to risk moderates in inner-city seats in order to appeal to more conservative social values and “bread and butter” issues and national security in outer suburban electorates didn’t work out for his party this time around.

It failed to bolster enough Coalition support among “quiet Australians” while cementing the image elsewhere of a leader who didn’t appreciate the importance of more modern female concerns – from climate change to more affordable childcare to “gender equity”.

Witness the infectious impact of Morrison’s handpicked candidate Katherine Deves’ targeting of transgender athletes in neighbouring seats like MacKellar and North Sydney as well as in her own disastrous tilt at Warringah.

Add in Labor’s attacks over the cost of living crisis – especially affecting all those women on lower wages in “caring” professions – and the vicious circle for the Coalition broadened out.

Women’s increasing propensity to vote for left-wing parties and to focus more on issues of social justice and health and education is not just a feature of this election or this country.

But the blokey Morrison seemed to personally funnel the considerable female anger in a #MeToo era – particularly after the furore over his reaction as a “father” to the alleged rape of a female staffer in Parliament House.

The hostile reaction was most potent among the 2 million-strong cohort of professional women who actually outnumber the 1.5 million male “tradies” despite both Labor and Liberal leaders loving to wear high-vis vests when campaigning.

Even professional women who were moderate Liberal MPs were not spared electoral wrath – reflected in the loss of Dr Katie Allen in Higgins to another female doctor running for the ALP.

But nor were Labor’s female candidates exempt from the reckoning. Kristina Keneally’s parachute into a supposedly safe ALP seat in Western Sydney spectacularly failed to open, losing to yet another local female independent whose strong community support had been ignored by party powerbrokers.

Tudge in, Frydenberg, Allen out

Another irony is the one Liberal seat probably left in suburban Melbourne belongs to the near invisible Alan Tudge, banished to the backbench over his affair with a staffer.

No-one believes he can survive. But he is still signalling the more moderate direction he believes Liberals must take to survive as a successful party.

That includes, according to the abruptly ex-Treasurer, getting more women into parliament and ending the damaging “culture wars” over climate change.

“Clearly the people have spoken and the Coalition needs to hear what has been said and act on it,” Frydenberg declared as he contemplated the smoking ruins of his Prime Ministerial ambitions.

He knows how difficult it is to regain seats, even heartland seats, once lost to independents. Prepare for the coming battle with conservatives over instead focusing Liberal efforts on traditional Labor electorates and fighting harder on climate change policy.

That’s largely because Labor’s “better future” of lifting productivity, continuous economic growth and real wage increases is easier for an opposition to promise than to deliver in government.

A new Australian government is not alone in facing the dilemma of a budget in permanent deficit at a time of high inflation and rising interest rates. It is likely to ensure any Albanese honeymoon is short-lived.

Albanese’s cautious approach clearly risks being overwhelmed by expectations of significant improvement for households as well as in the behaviour of government.

That operating dynamic is about to be tested, including managing demands by teal independents and a resurgent Greens party for an immediate lift in 2030 emissions reductions targets.

Labor is unlikely to alter its trajectory of a 43 per cent cut, for example. But assuming Labor wins at least 76 seats to govern in its own right, it will still require the Greens for controversial legislation in the Senate.

Women will judge on results.