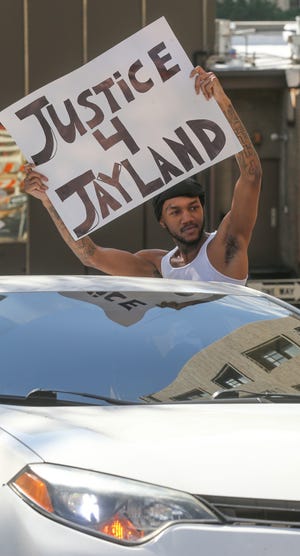 Ohioans renewed their calls for police reforms in the wake of another deadly shooting. A 10-year-old from Ohio made national news, and Republicans debated impeaching the state Supreme Court’s chief justice.

We break down what it all means on this week’s episode of Ohio Politics Explained.

It’s a podcast from the USA TODAY Network Ohio Bureau where we catch you up on the state’s political news in 15 minutes or less. This week, host Anna Staver was joined by reporter Haley BeMiller.

The death of Jayland Walker at the hands of Akron police officers has sparked renewed calls for police reform in Ohio.

Walker, 25, had more than 60 wounds in his body, according to the local coroner, after eight officers opened fire following a high-speed chase.

Republican Gov. Mike DeWine called the shooting a tragedy and asked state lawmakers to finally move forward on a set of reforms he pitched after the murder of George Floyd in 2020.

An unnamed 10-year-old girl made national news after the Indianapolis Star reported that she crossed state lines to have an abortion.

The girl was reportedly six weeks and three days pregnant–making her too far along for a legal abortion in Ohio since the overturning of Roe vs. Wade.

DeWine also called this situation a tragedy but declined to discuss how the law he signed in 2019 to ban almost all abortions after six weeks impacted this particular family.

A group of Republican lawmakers texted each other earlier this year about the possibility of impeaching Ohio’s Chief Justice, Maureen O’Connor.

The Republican leader of the state Supreme Court has sided with the three Democratic justices and rejected multiple sets of new state House and Senate district maps as unconstitutional. A move that has upset some people in her party.

Ohio has a second primary for its state House and Senate districts scheduled for Tuesday, Aug. 2.

This unusual move to split Ohio’s primary into two separate dates is the product of the state’s ongoing issues with redistricting. And it’s left candidates without districts, cost the state at least $20 million and sowed a lot of public confusion.

Listen to “Ohio Politics Explained” on Spotify, Apple, Google Podcasts and TuneIn Radio. The episode is also available by clicking the link in this article.