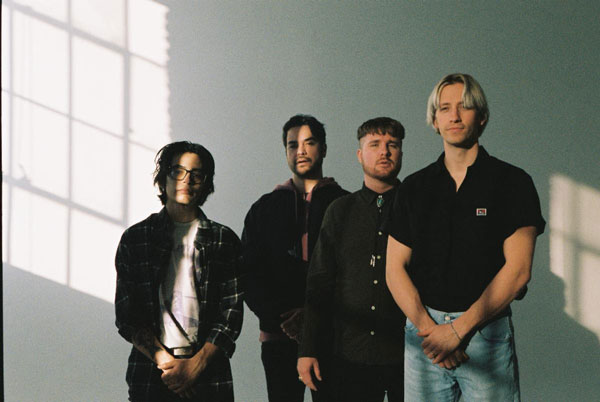 (SALT LAKE CITY, UT) — Indie rock band Sunsleeper have released their newest track, “Blemishes” via Rude Records. Colored by the warm halo of 90s alt-rock nostalgia, the new track takes memories of an ending relationship and reframes them into lessons of mindfulness.

“’Blemishes’ is about the slow unraveling of a deeply important friendship, as well as the acceptance of the relationship’s end,” shares vocalist Jeffery Mudgett. “The freedom in letting go of a toxic relationship is underrated. Sometimes there’s no need to mourn the end, but rather we should celebrate leaving that toxicity behind.”

“Blemishes” follows the release of previous tracks “Currents” and “In The Clouds”. Dripping with a 90’s inspired alt-rock feel, both of the tracks envelope moments with the mist of nostalgia and the power of dreaming. The tracks have gained notice from Ones To Watch, Hot Topic, Loudwire, Atwood Magazine, and other notable outlets.

Sunsleeper was halfway through the touring cycle for their debut album when the pandemic halted live music. For the Salt Lake City indie rockers, that pause allowed them to reframe what their journey as musicians and people inspires them to create and say. After forming in 2016 and briskly realizing their Nathan Hussey-produced debut EP Stay the Same, the band entered the studio for their debut album, inking a deal with Rude Records. You Can Miss Something and Not Want it Back dropped in summer 2019, with the band celebrating with runs featuring their collaborators and friends in All Get Out, an Audiotree live session, and most recently, a run with TWIABP and Bent Knee in fall 2021. While the pandemic still rages on in uncertain terms, Sunsleeper found themselves more solidified than ever writing their sophomore LP, with their road-tested lineup collaborating cohesively and with united goals. The band even found time to use the pandemic’s themes to rework Mac Miller’s “Come Back to Earth,” highlighting the track’s balance of self-reflection and hopelessness. (Sunsleeper on this recording is vocalist/guitarist Jeffery Mudgett, guitarist Matt Mascarenas, guitarist Cody Capener, bassist Jacob Lara, and drummer Scott Schilling.)

Advertise with New Jersey Stage for $50-$100 per month, click here for info

Advertise with New Jersey Stage for $50-$100 per month, click here for info