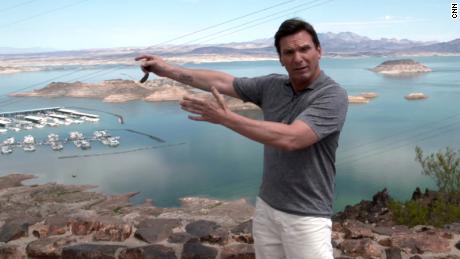 The government is also, for the first time, trying to do something major about climate change. President Joe Biden on Tuesday signed into law Democrats’ plan to spend hundreds of billions to transition the country more quickly away from fossil fuels and move the US toward carbon neutrality. See what’s in the package.
But the big lesson from this summer should be that we don’t have to wait for the effects of climate change. They’re happening now with floods, wildfires and the drying out of the Western US.

The Colorado River is parched; Lake Mead and Lake Powell dry up. Water cuts are coming

The Colorado River supplies water to 40 million people in the West. And on Tuesday, the federal government announced fresh cuts.

Starting in January, the river will operate in what’s known as a Tier 2 shortage condition for the first time, since Lake Mead’s water level is projected to be below 1,050 feet above sea level at that point.

The Western water situation could ultimately affect all Americans since those states and the water they need fuel a multibillion dollar agriculture industry that feeds the country with access to green vegetables in the winter months, among other things.

He pointed Tuesday to a so-called “bathtub ring” that shows where the lake used to reach. He showed a marina, moved a quarter mile from its former spot to follow the receding water line.

The lake has fallen from 95% full to a little more than a quarter full, he told CNN’s Alex Marquardt, illustrating the effects of two decades of nearly uninterrupted drought.

Lower basin areas — those to the South and West — such as Nevada, Arizona and the country of Mexico will have to cut the most under the Tier 2 designation.

The fight over water in the West is old

“It was written after one of the wettest years ever, so all this water was over-allocated to the lower basin states,” Weir said. “As a result, there has been this tension with Colorado, Wyoming, Utah — the upper basin states where all that snowpack has been diminishing. That was the water table for the Western United States, and now it’s gone.”

The agreement has been updated periodically, most recently in 2019. But negotiations for more drastic cuts in the face of accelerating climate-change-driven-drought have not progressed. The federal government said Tuesday it will work with the river’s stakeholders to come up with a plan.

We’re talking about a lot of water

Nilsen and Ramirez laid out some stats.

There are water-saving measures under way across the West. But clearly not enough

In Nevada, “non-functional” turf is banned and people are being paid to remove lawns to help reduce water usage. Weir said that movement will have to make its way to Southern California, where residents have been asked to cut back but not stop watering lawns.
California’s Gov. Gavin Newsom last week announced a new water strategy that includes capturing and storing rainwater as well as desalinating ocean water.
CNN’s René Marsh has previously reported about how communities in Arizona are being pitted against each other by the cuts, and investment firms are trading in water rights.

But there are complaints that agricultural producers are not being asked to sacrifice as much.

“You have to have a contribution from the sector that uses 80% of the water,” John Entsminger, the general manager for the Southern Nevada Water Authority, told Nilsen and Ramirez. “That’s not law, politics, it’s just math,” he said.

What to do with agribusiness is a key part of the interstate talks, according to reports, with proposals to pay farmers to let lands lie fallow. As water is cut, it could impact the fertile valleys that provide the country with tomatoes and greens.

Last year, CNN published a must-see interactive on how the water crisis will affect the country’s supply of vegetables.

“There’s a ton of ideas, even some wild ones,” Weir said Tuesday. “People say you should pipe water from the Mississippi or drag glaciers down from Alaska and melt them and use the water. They’ve been having these conversations for 100 years down here, but ultimately this is a slow-motion, man-made disaster in real time,” he said, pointing to the skeletal lake behind him.