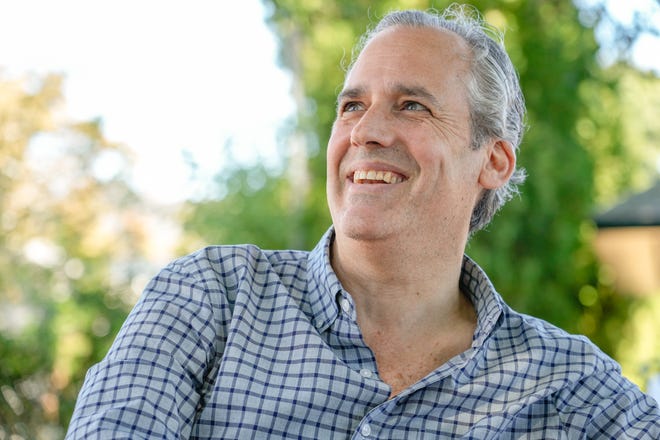 PROVIDENCE – It’s hard not to see Matt Brown as an underdog in the Democratic primary for Rhode Island governor.

Applying that label to someone who’s held statewide office before and run previous campaigns for the U.S. Senate (albeit long ago and short-lived) – and more recently, a campaign for governor – should feel counterintuitive. But the numbers confirm that the onetime Rhode Island secretary of state, who’s running on a progressive platform, trails his three more centrist rivals in the crowded field.

In the three polls released so far, Brown has never pulled more than 8% of the vote. Gov. Dan McKee and Secretary of State Nellie Gorbea, the leaders throughout the race, have garnered at least 20% in all three polls, while former CVS executive Helena Foulkes, a political newcomer, has seen her share climb into the teens.

For the latest polling results:Poll shows McKee, Gorbea in ‘statistical dead heat,’ ahead of Democratic primary for governor

And there are the fundraising figures. Brown entered the home stretch of the campaign with just $67,000 in his account at the end of June. Compare that to McKee, who had nearly 20 times as much money to spend on his bid to stay in office, and Gorbea and Foulkes, both of whom had about 10 times as much.

But Brown is undeterred. His fundraising is surging, he says. He has pulled in more than $150,000 over the last seven weeks, according to his campaign.

As to the polls, the most recent one by WPRI and Roger Williams University showed a fifth of respondents were still undecided and a large number said they may change their minds, leaving a big portion of the electorate still up for grabs.

As Brown tells it, it’s because the candidates ahead of him are already well known to Rhode Islanders. McKee is essentially an eight-year incumbent, having been lieutenant governor from 2015 until 2021, when he moved into the governor’s office upon Gina Raimondo’s departure for Washington.  And Foulkes, while not a seasoned office-holder, has advertised heavily.

If no one has been able to consolidate an outright lead, Brown says, it’s because voters are looking for someone different.

He believes that someone could be him, a candidate pushing for sweeping change across the state through a Green New Deal, affordable housing, livable wages and higher taxes on the wealthy to pay for it all.

“It’s been so long that we’ve been used to having a government that isn’t working for the people that we have to pressure and plead and beg to get crumbs,” Brown says. “It doesn’t have to be that way.”

Leading a slate of progressives

If there’s one takeaway from Brown’s bid for office, it’s that he sees his candidacy as part of something much larger. In the kickoff video for his campaign, he talked of a revolution.

Upending the state’s political establishment has been the goal since he cofounded the left-leaning Rhode Island Political Cooperative after his failed bid for governor in 2018, which he lost, badly, in the primary to Raimondo. He and state Sen. Cynthia Mendes, who’s running for lieutenant governor, are campaigning on a joint ticket — not the norm in Rhode Island.

But then both are carrying the banner of the Political Co-op, as are 29 others seeking seats in the General Assembly and on the Providence and Pawtucket city councils. They share a host of core positions that include a $19-an-hour minimum wage, a 4% annual cap on rent increases and a shutdown of the fossil-fuel infrastructure in the Port of Providence.

Candidates from the co-op won eight House and Senate races in the 2020 election, helping push the General Assembly to the left. The impact was almost immediate in areas like the environment. Just months later, after years of inaction on climate change, legislators passed a landmark law to make reductions in carbon emissions mandatory. And the session that just wrapped up in June has been heralded as the most productive on environmental policy in recent memory.

But Brown says their work is far from done. The co-op doesn’t want to just influence policy.

And that means victories in the House and Senate as well as the governor’s office. When it’s put to him that government makes changes only incrementally, he disagrees.

“There are periods when things get bad enough and people get organized and you can have major change and progress,” he says, mentioning the New Deal, the series of federal programs launched in the 1930s during the Great Depression.

“There’s no doubt that things are bad enough now,” Brown says. “It’s been a 15-year pummeling: the recession, the rise of fascism, the onset of the climate crisis that threatens the whole planet. How bad does it have to get before we start to see bigger changes?”

Brown likes to say that he’s been a community activist since the day he was born. His mother went into labor with him in 1969 while she and his father were participating in a protest against the Vietnam War at the Washington Monument.

After graduating from Columbia University, he helped start the Rhode Island arm of City Year, a national program that recruits young people to tutor and mentor public school students.

Brown was elected secretary of state in 2002 and served one term. He ran for U.S. Senate in 2006 but abandoned the bid saddled with mounting campaign debt and allegations he channeled campaign funds through, among other places, Hawaii to skirt contribution limits.

After his term as secretary of state, he moved to Washington, where he lived from 2008 to 2012, and led Global Zero, a nuclear-weapons nonproliferation organization. He continued to work for the group after returning to Rhode Island.

More recently, Brown, who lives in Providence with his wife and two teenage children, has worked to build the organization now called Renew U.S., which advocates for state-level climate policies while also aiming to address racial and socioeconomic inequities.

His first campaign for governor was marked by enmity between him and Raimondo, the incumbent. Brown attacked her for her fundraising and connections to big corporations and lobbyists. She in turn accused Brown of financial irregularities during his failed Senate campaign. On primary day, he took only 33.5% of the vote to Raimondo’s 57%. Former state Rep. Spencer Dickinson took 9%.

This campaign hasn’t been quite as contentious, but Brown has gone after Gorbea for accepting campaign donations from a prominent oil lobbyist.

He’s also taken shots at McKee for what he says was the governor’s slow response to homelessness during the COVID-19 pandemic and, more recently, for the public-financing deal for the proposed Pawtucket soccer stadium. McKee, in turn, accused Brown of grandstanding when he and Mendes camped out in front of the State House last November to draw attention to housing problems.

Making his pitch to voters

“You look a little familiar,” Cecile Sherman calls out to Brown.

It’s a Saturday morning and Brown is out canvassing in the Silver Lake neighborhood of Providence with Arthur Flanders, recruited by the Political Co-op to run against incumbent Frank Ciccone in Senate District 7. Brown has been spending his weekends this summer on the campaign trail around the state with different co-op candidates.

Sherman spotted Brown from across the street. He and Flanders walk over and talk to her about spiraling rents, problems with the education system, the coming spike in electric rates.

It’s clear from the get-go that Sherman, who describes herself as unaffiliated and a friend of Ciccone’s, doesn’t share their politics, but in the course of a quarter-hour Brown and Flanders explain their positions, including support for a higher minimum wage.

“But do you understand that when you vote for a minimum wage, the price of everything goes up?” Sherman asks.

“Large corporations say it will hurt the economy, but it doesn’t,” Brown counters. “When you put money in people’s pockets, they’ve got money to buy things.”

The conversation is amiable. The only uncomfortable moment comes as Brown and Flanders are leaving and Sherman asks what they think of the upside-down twerking video posted online by state Sen. Tiara Mack, a former co-op candidate, which caused some hand-wringing a few weeks back. Brown says a polite goodbye.

At another house, a man asks Flanders and Brown if they’re Republicans. When they answer in the negative, he says he isn’t interested in talking to them or any other Democrats.

“You guys are doing a helluva job,” the man complains sarcastically.

At most of the other doors they knock on, there’s no answer. But they’re in luck at Jackeline Mota’s tidy house. She’s in the garage with family, wrapping tamales, and comes out holding her four-month-old son.

“So we’re trying to go in and make some real changes for people,” Brown tells her. “Our feeling is people have been struggling for a long time here. It’s tough to make ends meet.”

When he asks Mota about her concerns, she lists public safety as her top priority. She doesn’t like dirt bikes speeding through the streets and worries about gun crime. He tells her about his backing of a ban on assault weapons.

Before going out with Flanders, Brown rallies in Providence’s Fargnoli Park with Mendes, other Political Co-op candidates and their supporters.

Brown stands out in the group. He’s still only 52, but nearly everyone else looks to be in their 20s and 30s. And while most are dressed in shorts, t-shirts and sneakers, Brown looks more the part of the politician, in pants and a tucked-in button-down.

The people here would have heard Brown before, but when he speaks, he addresses them as if for the first time.

“I have never been more hopeful because there’s something actually new happening in our state, something that has never happened before,” he says. “Which is that people from all across the state – an extraordinary group of people, people who are nurses and teachers and social workers and activists, people who have been doing the work to care for our communities for a very long time, the members of the Rhode Island Political Cooperative – have come together to run for office.”

“This is not a campaign I’m in just to elect a new governor and a new lieutenant governor. It’s a campaign to elect a whole new government for our state. And we’re gonna do that.”