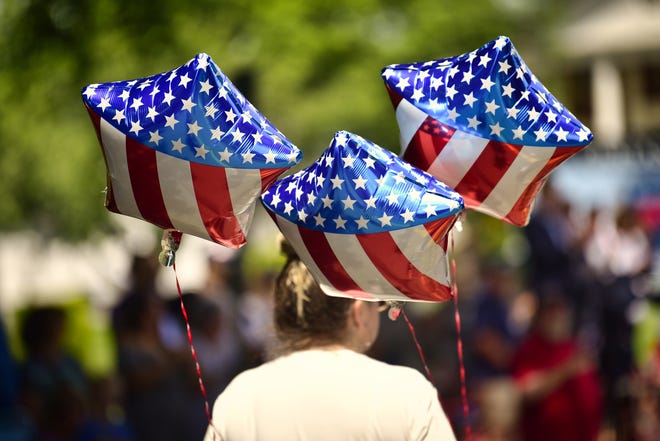 In July of 1987, I pledged allegiance to the flag of the United States of America and renounced my citizenship to the country of my birth, Taiwan. Standing in the Manhattan courtroom on a stuffy summer day with my father, my younger brother and hundreds of other new citizens from around the world, I was in awe of the 13 stripes representing the original colonies, the 50 stars representing the states, in a blazing glory of red, white and blue. It was a symbol of hope and welcome.

It’s a memory I return to on this Flag Day, even as that symbol of a nation indivisible has somehow become divisive, politicized like everything else in modern-day America.

A few years after that ceremony, I married my husband, a Marine Corps officer. We started life together at the Marine Corps air base in Twentynine Palms, California, where the Stars and Stripes flies proudly along with the U.S. Marine Corps flag at the front gate. My husband had taken an oath to defend our country and our flag, and would do so for the next 30 years of his life, fighting in wars and conflicts around the world.

The flag is especially meaningful to me as an immigrant and a member of a military family. It’s an emblem of unity across America. That’s what we’re celebrating when we commemorate Old Glory’s official adoption as the nation’s flag on June 14, 1777, not a few square feet of fabric and thread — or an agenda.

But in the past week, we’ve been reminded of how the flag has sadly become a source of controversy. To many, it has come to signal support for a particular political movement: that of conservative backers of Donald Trump.

It flies defiantly from the back of pickup trucks, waves like a middle finger next to “Let’s Go Brandon” signs.

Anyone who upholds the principles of freedom and democracy has a right to the flag, no matter their politics. But somewhere along the way, the flag became associated with a faction many of us find unsettling in its undemocratic leanings.

As the Jan. 6 hearings continue this week, who can forget the images of rioters who literally draped themselves in flags and then chanted of their desire to hang Vice President Mike Pence for his refusal to subvert the 2020 election? Former President Trump has embraced the flag as a symbol of his coalition.

Political movements always co-opt American symbols, of course. Conservatives embrace hero-worship of the military, while today’s liberals place people of color on pedestals. Both sides are wrong in their unthinking idolatry.

More:He was a veteran of six WWII campaigns. His body lay unclaimed, but now he’ll get honors

‘It’s our duty’:Asian American veterans honor war dead in NJ while calling for end to hate

But using the American flag as a divisive symbol should be beyond the pale. Loyal Trump supporters displayed the flag at the Capitol on Jan. 6 along with racist signals such as the noose and gallows that were erected outside the building, as well as a flag celebrating the Three Percenters, an anti-immigrant militia group.

We’ve come a long way from the days when the red, white and blue simply called to mind Fourth of July fireworks and Americana. The flag should be a symbol of love, not hate. And it should be common ground for all, not a dividing line between “Real Americans” and everyone else.

In the aftermath of the Sept. 11 terrorist attacks, flags were flown at just about every home in our neighborhood in Brighton, New York, outside of Rochester. By then, my husband was a major and commander of a unit with over 180 Marines. He feverishly prepared to send his company to lower Manhattan as he prepared to deploy. The flag then was a symbol of strength and resolve.

It displayed the same message when Marines raised it at Iwo Jima or when firefighters flew it defiantly over the rubble of the Twin Towers.

That’s the true meaning of Old Glory. According to the Gettysburg Flag Works in upstate New York, the Founders ascribed meaning to each of its colors: Red to symbolize hardiness and valor, white for purity and innocence and blue to represent vigilance, perseverance and justice. It’s also been said that the red represents the blood shed for the freedom of this nation.

Our politics may be fractured into red and blue, but there are no Republican or Democratic hues in that origin story.

That’s the way our flag should stay: one nation’s symbol, under God, indivisible.

Mary Chao 趙 慶 華 covers the Asian community and real estate for NorthJersey.com. To get unlimited access to the latest news out of North Jersey, please subscribe or activate your digital account today.