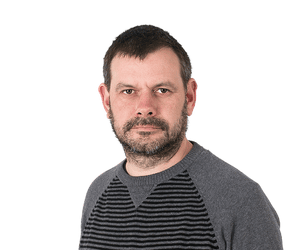 Sir Graham Brady, chair of the 1922 Committe, is holding a briefing for journalists outside parliament with Jake Berry, the party chairman.

They are taking questions now.

Q: What is your message to the public? And do you want a unity candidate?

Berry says it is up to MPs to decide if there is one or two candidates. If there are two, members will get a choice.

Q: Are you stitching up the rules to keep Boris Johnson off the ballot?

Brady says the threshold for nomination is 100 supporters. That means there could be three candidates, he says.

Asked whether she had spoken to Johnson about whether he intends to stand in the leadership contest, she said: “It’s now down to MPs to decide who it is that they want to back.

“There is only one MP who has the mandate of the British public, who won a general election only three years ago with an 80-seat majority and that was Boris Johnson.”

Here is a video of “highlights” from the last 25 hours of Liz Truss’s premiership.

Sir Graham Brady, the chair of the 1922 Committee, says it will be possible to conduct a leadership ballot by 28 October.

Speaking on BBC’s Question Time, the minister for climate Graham Stuart says the Tories are doing some soul searching.

He apologises to the Cheltenham audience and to the country for the “instablity” caused.

“On the inside track it hasn’t been comfortable,” he said. “We are facing many challenges.”

A poll for the ITV programme Peston found that the public think Sir Keir Starmer would be a better prime minister than any of the potential next Conservative party leaders.

The UK is heading for its third prime minister in eight weeks. In the 45 days that Liz Truss has been in power, the country has been rocked by the death of Queen Elizabeth II and suffered an economic crisis exacerbated by the PM’s first moves, with a series of senior ministers appointed then sacked. If you have been watching UK politics only distantly, here is a catch-up on what has been happening.

The Irish foreign minister, Simon Coveney, has spoken of his frustration at “being back to instability again” in terms of relations with the UK following the resignation of Liz Truss.

He said the mood music had improved recently, adding he had met the Northern Ireland secretary, Chris Heaton-Harris, on multiple occasions in recent weeks.

“The meetings between Liz Truss and the taoiseach were also much better in terms of tone than we had seen for some time,” Coveney told RTÉ.

“The frustration for us is we are back to instability again. I had the privilege of being foreign minister for five years. In that time I have dealt with six secretaries of state for Northern Ireland, five foreign secretaries and now it’s going to be four prime ministers.

“From an Irish perspective this isn’t really about the personalities, it’s about stability and about having a partner to negotiate with that can help us solve problems together.”

Here is Sir Graham Brady, chair of the 1992 Committee of backbench Conservative MPs, outlining the process for the party’s leadership contest.

The National Cyber Security Centre has contacted the Conservative party over its leadership voting preparations, amid concerns a rogue state could attempt to interfere with the contest.

The party delayed sending out ballots for the previous leadership vote in August after an intervention by the NCSC, which resulted in the Conservatives enhancing security around the voting process, and the agency has been in touch with the party again today. The vote by the Tory membership next week will be conducted online.

An NCSC spokesperson said: “As the UK’s national technical authority for cyber security we continue to provide advice to the Conservative party, including on security considerations for online leadership voting.”

One expert said one aim of a cyberattack on the voting process would be to discredit the process rather than influence the result.

Labour’s deputy leader, Angela Rayner, told Sky News the 1922 Committee looked like “rabbits in the headlights” after appearing in front of the press, and “they haven’t got a clue what they are doing”.

She added: “The scary thing is we could have a situation where we have a prime minister of this country with zero mandate.”

Rayner also described the situation engulfing the Conservative party as “utter chaos” which has left her “frustrated and angry”.

Here is the full story on Boris Johnson considering putting his hat in the ring:

The former leader, who quit in July following a series of scandals that left his personal integrity in tatters, was expected to fly back from the Caribbean where he has been on holiday with his family.

One ally told the Guardian that Johnson felt it was in the “national interest” for him to stage a return. Another said the Tory heavyweight felt his premiership had been unfairly “cut off before its time” and that he still had plenty to do at No 10.

However, the Conservative party announcement that the threshold to reach the ballot paper would be the support of 100 MPs made the prospect of Johnson running again less likely, with some Tory MPs suggesting he could be wasting his energy by running.

Pressed on Labour’s demands for a general election and what mandate the next Tory prime minister will have without one, the levelling up minister Paul Scully said: “People elected a government, this is not a presidential system.

“Of course Labour want a general election but what you will find is that when the (Conservative) party get their strong leader, eventually things will turn to what Labour have to offer.

“And I think Keir Starmer and the Labour party will be found wanting because they can chip away, as an opposition would do, but we’ve got to deliver for people and I’m not sure I’ve seen anything from the Labour party that suggests they’ve got any vision.”

Reacting to Liz Truss announcing her resignation, the levelling up minister Paul Scully told PA Media: “It’s the right thing to do. It’s sad; it’s always sad when you see someone that’s worked so hard to get to her position try to deliver for the country, not be able to bring the party together and do that final push to support people.

“But we now need to move on. We are here not for our own individual careers, we are here for the country and the people we represent and that’s what we’ve got to crack on and do now.”

On reports the former prime minister Boris Johnson could run, he said: “I suspect what will happen is we’ll look afresh, there is a lot of talent looking to stand, let’s see what happens over the next few days.”

Earlier today Ladbrokes had Rishi Sunak as favourite to become the next Tory leader, on 5/6. The next favourite candidates were (in order) Penny Mordaunt, Boris Johnson and Ben Wallace.

The rules announced by the party for the contest are unlikely to shift Sunak from the top spot. The key decision is the requirement for candidates to be nominated by 100 MPs, making it unlikely that Johnson will be able to stand as a candidate. In a ballot of members, Johnson would win, and there are bound to be claims that the threshold has deliberately been set this high to keep him out of the contest.

It is also hard to see a rightwing candidate, such as Suella Braverman or Kemi Badenoch, getting 100 nominations.

You can see the results of every round of voting in the summer contest here. Sunak got 137 votes in the final ballot, and he should have no problem getting 100 nominations by Monday – particularly since his economic warnings from the summer have been vindicated. Mordaunt got 105 votes in the final round, and she is certainly a contender too – not least because her parliamentary performance on Monday impressed many colleagues.

But in the summer Wallace was not standing. This time he has indicated he is interested, and it conceivable that he could get 100 nominations as a non-Sunak candidate instead of, or as well as, Mordaunt.

It is equally possible that, if the leading figures struggle to get 100 names, they could all end up backing the frontrunner, who at the moment is Sunak. This is what some Tories want. (See 5.41pm.)

If members do end up having to choose between one of Sunak, Mordaunt or Wallace, recent YouGov polling suggests they will go for Sunak.

That is all from me for today. My colleague Nadeem Badshah is taking over now.

The Conservative campaign headquarters (CCHQ) has just released a note with a few more details about the leadership election process. Here is the key passage:

Nominations open tonight and will close at 1400hrs Monday 24 October 2022.

Candidates will need a minimum of 100 nominations to proceed to the ballot.

There will be an indicative vote of MPs once there are two candidates.

Sir Graham Brady MP will act as returning officer for the election.

Once the parliamentary process is completed, CCHQ will assume responsibility for the administration of the vote of the Conservative party membership, as long as two candidates remain. The ballot of party members will be conducted via secure online voting and we have already held discussions with the NCSC [National Cyber Security Centre] regarding this. The ballot will close at 1100hrs on Friday 28 October – the result will be announced later that day. Only qualifying members, who have been a member for at least three months, can vote.

If candidates need 100 nominations, at most there could be three candidates. It is more likely that there will be just two, or perhaps even one.

But if there are three candidates, there will be two votes. The first vote will be to eliminate the least popular candidate. Then there will be a second, “indicative” vote. This will allow party members to know which of the two final candidates is most popular with MPs. (See 3.20pm.)

At this open-air briefing Sir Graham Brady, chair of the 1922 Committee, also said nominations would close at 2pm on Monday.

He said ballots of MPs would take place on Monday. And when it was down to two candidates, there would be an indicative ballot, he said.

Jake Berry, the Tory chair, said there would be an online ballot of members if two candidates were left after the ballot of MPs.

We have decided that if the party should decide to put forward two candidates there would be an expedited, binding, online vote of Conservative party members to choose its next leader.

He said all stages of the contest would be over by next Friday, 28 October. If members have to choose, there will be at least one broadcast event, so that members can hear from the candidates, he said.