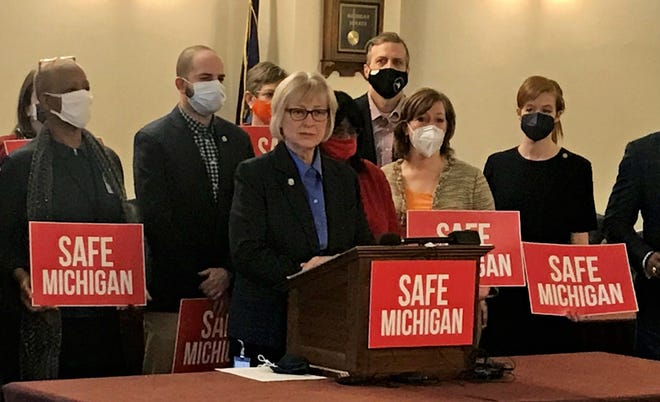 Senate Democrats successfully made a procedural move to bring a set of bills to impose new storage standards for firearms to the Senate floor for a vote, discharging the proposals from committee in order to set up action before the full Senate. However, Republicans who control the chamber quickly voted to send the bills back to the Government Operations Committee.

In the House, Democrats attempted to tie a school safety bill under consideration by the chamber to bills requiring safe storage standards and background checks for firearm purchases. But both amendments were rejected by the Republican-controlled chamber.

“I object to not wanting to do anything any longer. This is urgent. Every day we don’t take action we are choosing guns over children. Enough is enough. No more prayers. No more thoughts. No more inaction.”

Bayer was the sponsor of one of the bills in the spotlight Wednesday. It would have placed new safe storage requirements on firearm owners if their guns potentially could be accessed by a minor.

The gun owners would have to keep the weapons in a locked box, store them in a secure location or use a locking device.

The Senate voted 22-14, along party lines, to refer the storage bills back to the Government Operations Committee.

Sen. Ken Horn, R-Frankenmuth, said families were grieving, and it was “way too early” to assign bill numbers to their grief.

“There are political solutions,” Horn said during his own speech on the Senate floor. “But there are just as many spiritual solutions.

Rosie Jones, a spokeswoman for Senate Democrats, said the caucus’s goal was to have “commonsense safety bills passed into law.”

“They have been languishing in committee for nearly a year, since before Oxford, and we moved to discharge them and get the bills headed in the direction of the governor’s desk,” Jones said.

Any such proposal would have to pass both the Republican-controlled House and Senate before reaching Democratic Gov. Gretchen Whitmer for her signature.

In the House Wednesday afternoon, Rep. Felicia Brabec, D-Pittsfield Twp., attempted to tie legislation requiring background checks for firearm purchases to a bill the House is expected to vote on Thursday that would allow schools to submit critical incident mapping data to law enforcement as part of their safety response plan.

Brabec’s amendment was not adopted nor was a subsequent amendment from Rep. Mari Manoogian, D-Birmingham, that sought to tie the same bill to safe storage laws pending in the House.

Rep. Darrin Camilleri, D-Brownstown Twp., urged the Legislature to move forward the requirement for background checks on gun purchases, noting the state is five days away from the six-month anniversary of the Nov. 30 Oxford High School shooting. He asked lawmakers to break with the “infuriating and numbing routine” adopted after mass shootings.

“…What kind of dystopian timeline are we living in when this is what our communities are relegated to?”

On Wednesday morning, Sen. Jeremy Moss, D-Southfield, told his colleagues the “time for action was a long time ago.”

Multiple Senate Democrats, including Minority Leader Jim Ananich, D-Flint, said on social media that majority Republicans also ended session Wednesday without allowing them to give statements at the end of the meeting.

“If they want to be silent about children dying at school, that’s their choice,” Ananich tweeted. “But they will not win at silencing us.”

After the Oxford school shooting, Senate Majority Leader Mike Shirkey, R-Clarklake, said there would be time to determine whether the state Legislature should act.

“If we get obsessed with eliminating all risks, we will then develop and evolve into a country we won’t recognize,” Shirkey said at the time.

“It’s a balance,” he said. “It’s a very narrow road, and it’s hard. These kinds of events keep those thoughts in mind.”

Rep. Luke Meerman, who helped lead a school safety task force in the wake of the Oxford High School shooting, said Wednesday that the group’s recommendations on school safety, law enforcement and mental health improvements would be released in the next couple of weeks.

The report will include recommendations for about 17 pieces of legislation to improve school safety, but there will be no recommendations related to gun control. The bipartisan committee was unable to reach a consensus on gun control, the Coopersville Republican said.

“Our goal has always been a consensus report that all of us can sign and finding things that we think are going to be very fundamental and instrumental in helping to hopefully make some serious changes,” Meerman said.