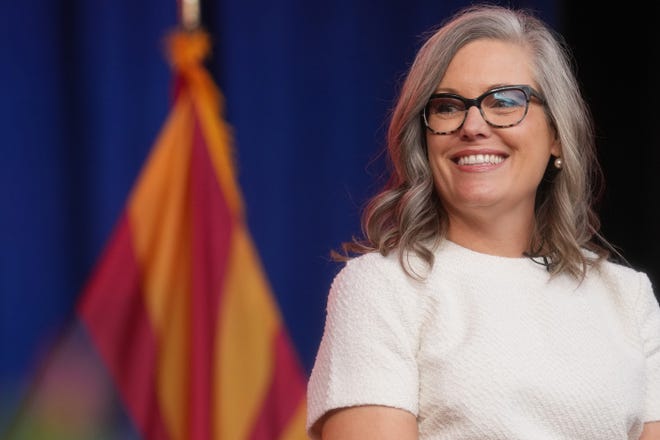 Arizona’s new governor Katie Hobbs has a fraught history with racial minorities, so maybe it shouldn’t surprise us that she launched her governorship with a couple bows to identity politics.

Hobbs kicked off her term with what is most certainly the first land acknowledgement in an Arizona governor’s inaugural speech and an executive order that serves marginalized populations.

It is not clear if Hobbs has fully embraced the modern grievance philosophies of intersectionality and anti-racism that now consume much of the Democratic Party or if she is simply working to repair her relationship with ethnic and other minorities.

She expressed that with the land acknowledgment she made in her inaugural speech:

“We must acknowledge that we are here because of the first people who have called this place home since time immemorial and where we gather at this moment continues to be connected to the O’odham of today’s Salt River Pima Maricopa Indian community.”

As land acknowledgments go this was subtle.

Most land acknowledgements are read or spoken at the very beginning of speeches or events, almost separate and apart from the speech itself. Hobbs slipped hers in at the ninth paragraph of her inaugural speech in a way that flowed with an appreciation for the history of Arizona’s Indigenous people.

But the word “acknowledge” is the tell here – a sign-certain that this was Hobbs’ “land acknowledgement” and also the connection of “this place” (the land) with the O’odham people.

Also, the expression “since time immemorial” is common to many land acknowledgements. More on that later.

If you surveyed Democrats and Republicans most would likely see nothing objectionable about recognizing the O’odham people and their extraordinary history. I’ve spoken and written about it a lot. I’ve also worked with university officials and foundations to promote that history.

The problem with land acknowledgments

But land acknowledgements are highly controversial, because they whisper to the larger society and minority populations that the land upon which their modern society is built was stolen. It implies a debt is owed. Eventually those who believe their ancestors were wronged will come calling for redress.

One need only look at the Palestinian territories, India-Pakistan, Russia-China and many other examples around the globe to know that historic grievance over land is political nitroglycerin.

Leftist activists have promoted land acknowledgement statements in Australia, Canada and now the United States. They are becoming more common in our state as Arizona State University has begun the practice.

So has the city of Tempe.

“The statements are objectionable both in their content and their coerciveness. Like the practice of listing one’s ’pronouns,’ they creep quickly into the mainstream from the academic fringe. As these deeply ideological declarations become a prerequisite for academic and other kinds of speech, the unwoke on campus will be only further silenced and isolated.”

By arguing Native Americans have been in a place “since time immemorial,” these land acknowledgements “(put) us in the realm of myth rather than history,” Kontorovich writes. “In fact, Native Americans came to North America at various times, migrated and sometimes displaced each other.”

Some liberals also dislike these statements

That is the conservative argument.

Liberals generally don’t share that view, and believe we are obligated to recognize the dignity and sufferings of the people who came before us.

But there is now on the left growing opposition to land acknowledgement statements. And they illustrate well how a practice that begin as well-meaning can grow contentious.

The Association of Indigenous Anthropologists has asked the American Anthropological Association to pause land acknowledgments and a related practice called “the welcoming ritual,” in which Indigenous persons perform “prayers or blessings.”

Three of those Indigenous anthropologists republished on the PBS News Hour website argue it is time to improve upon today’s land acknowledgments.

“No data exists to demonstrate that land acknowledgments lead to measurable, concrete change,” wrote Valerie Lambert, Michael Lambert and E.J. Sobo. “Instead, they often serve as little more than feel-good public gestures signaling ideological conformity to what historians … have called – in the context of higher education’s diversity, equity and inclusion efforts – ‘a naïve, left-wing, paint-by-numbers approach’ to social justice.”

Land acknowledgements should make us uneasy

To be legitimate, land acknowledgement must be coupled with action, they argue:

“What many Indigenous persons want from a land acknowledgment is, first, a clear statement that the land needs to be restored to the Indigenous nation or nations that previously had sovereignty over the land.

“This is not unrealistic: There are many creative ways to take restorative measures and even to give land back, such as by returning U.S. national parks to the appropriate tribes. Following from this, land acknowledgments must reveal a sincere commitment to respecting and enhancing Indigenous sovereignty.”

Modern audiences hearing land acknowledgements should be shifting in their seats, the anthropologists argue. “If an acknowledgment is discomforting and triggers uncomfortable conversations versus self-congratulation, it is likely on the right track.”

Hobbs’ land acknowledgement certainly didn’t meet that standard, and was so soft-pedaled it was barely noticed.

Her first order was a nod to LGBTQ workers

But in her first official act as governor, she also paid tribute to identity politics with an executive order to shore up worker protections for LGBTQ state employees and contractors. Her order outlaws workplace discrimination based on sexual orientation and gender identity.

“Today marks a new era in Arizona, where my administration will work to build an Arizona for everyone,” she said.

One of Hobbs’ liabilities on the campaign trail was her standing with minority voters. Many expressed their doubts about her after a second court ruling determined that an African American woman under her ultimate supervision as Democratic Senate minority leader was wrongly fired from her job in 2015.

The court ruled for the woman and against the state in her discrimination lawsuit.

Hobbs’ failure to apologize quickly or in a genuine way led to much criticism from fellow Democrats. Republican Kari Lake pounced on the issue in the general election. Nonetheless, Hobbs prevailed.

Can Hobbs be a centrist on identity politics?

In her first days in office, our new governor is clearly speaking to the minority left, but she was also speaking in a larger way to all Arizonans, saying her door is open to people of every political stripe if they have sincere suggestions for improving our state.

Though Democrats now control some of the most important jobs in the state – governor, two U.S. Senate seats, secretary of state and attorney general – Republicans still control the state Legislature and enjoy a roughly 160,000-person edge in voter registration.

For a Democratic governor, it was easy to close the door on right-wing election deniers. It will be much tougher to tune out social-justice radicals.

Phil Boas is an editorial columnist for The Arizona Republic. Email him at phil.boas@arizonarepublic.com.