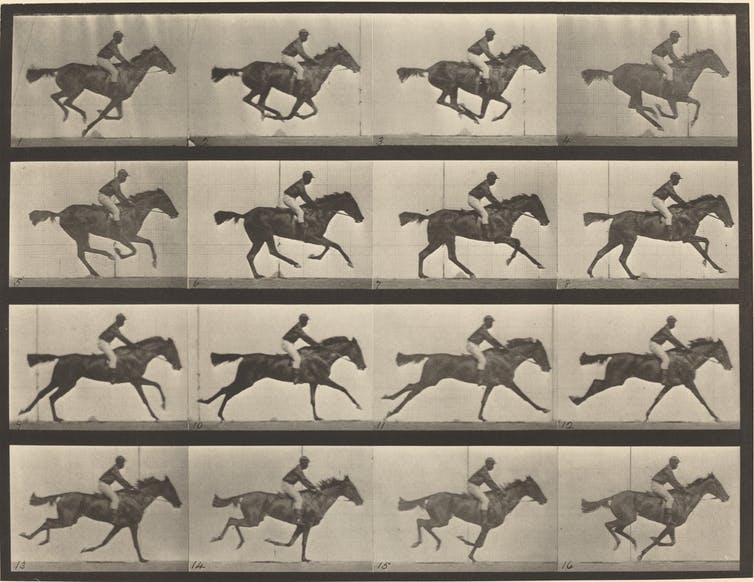 It is a horse named Ghost who first signals that something is awry in the sky in Jordan Peele’s latest visually and thematically ambitious film Nope. OJ (Daniel Kaluuya) is the head wrangler of Heywood Hollywood Horses, an intergenerational, Black-owned and now struggling ranch that specializes in training horses for the big screen.

But it is his sister Emerald (Keke Palmer) who notices that Ghost, one of their family’s veteran equine actors, is unexpectedly standing in an outdoor pen staring out into space, his light grey fur as sublime as the moonlight. Ghost jumps the fence and gallops away, saying “nope” in his own way.

As a subversive Western science fiction kaleidoscope, Nope challenges viewers to consider technology, surveillance, other worldly life and the making of spectacle through different lenses — including the eyes of animals. The result is an unsettling view that exposes core ethical questions about animals’ work in films, including in Nope itself.

As Emerald recounts early in the film, the very first moving picture was created from photos of a man galloping on a horse, specifically a Black jockey whose name has been lost to — or erased from — history, depending on your perspective. The horse was named Sallie Gardner.

Horses have had a long and rocky history in Hollywood. Early Hollywood films put horses through gruelling working conditions, often resulting in injury or death. They were essentially treated as disposable.

Now on-set animal action, in the United States at least, is monitored by the nonprofit American Humane. Plus, animals on screen are increasingly computer-generated images or motion capture marvels that fuse digital imagery with human actors, as was the case in the award-winning rebooted Planet of the Apes trilogy starring Andy Serkis as the lead chimpanzee, Caesar. We have both reformed and replaced animals’ work in the making of entertainment.

Horses and chimpanzees are now often placed on opposite sides of a perceived line between accepted and unacceptable animal use. Most horses are domesticated and have worked for humans for thousands of years. Their careers, reproduction and social lives are largely controlled by humans. In contrast, although individual chimpanzees have been held captive, their species remains wild.

Nope reflects this divide and begins with the chilling sounds of what viewers later learn was a chimpanzee named Gordy, the star in an eponymous sitcom, who snaps after balloons pop loudly on set and ends up attacking his human co-stars.

This mirrors real life human-animal eruptions, like when Mantacore the tiger mauled Roy Horn of the (in)famous Siegfried & Roy, or when Travis the “pet” chimpanzee and former actor attacked his caretaker’s friend before being shot by police.

In Nope, the tragedy involving Gordy (Terry Notary) is revealed in excruciating detail, including an evocative moment when the chimpanzee sees his young co-star Ricky (Jacob Kim), hiding under a table. The two reach out to touch hands, as bullets fly. In a situation ripe with horror, viewers are asked to consider whether the foundational tragedy is Gordy’s employment as an actor.

Each chapter in the film is named after an animal — Ghost, Lucky, Clover, Gordy and Jean Jacket — foregrounding four horses and one chimpanzee. The horses are essential to the Heywood family’s livelihood and legacy, with OJ noting that he needs to get up early because “he has mouths to feed.”

Yet the ultimate fate of Ghost, the horse who rang the initial alarm by bolting away, is unclear. More troublingly, Clover meets an untimely end (off screen), one which is surprisingly un-mourned and barely noted.

In contrast, Lucky, who is portrayed as a sage and experienced equine, is essential to each facet of the plot. OJ asks those on a television set not to look Lucky in the eye early in the film, a foreshadowing of later extra-terrestrial communication.

As a lifelong horsewoman, I can confirm that horses generally have no concerns about eye contact. Recent studies have found that they are not only attuned to human facial expressions, but also have more than a dozen of their own. Granted, the aversion could be particular to Lucky.

Without question, the real horse (or perhaps horses) who plays Lucky is extraordinary. Most horses are fearful of blowing objects. Yet Lucky, in partnership with OJ, gallops past a whole series of massive wind dolls dancing erratically, without batting an eye. That reflects significant preparation and real-time emotional control.

Animal actors and the skill involved in their work are being recognized. The canine star of the Canadian television program Hudson and Rex, Diesel vom Burgimwald, is named in the credits and regularly appears on the show’s social media channels. Jeff Daniels, in his Emmy-acceptance speech for Godless, thanked his equine partner, Apollo.

Yet the real horses who played Lucky, Clover and Ghost in Nope are not included in the credits. The head horse wrangler — Bobby Lovgren — is named, but the horses are omitted. In a film that powerfully explores the ethics of animal actors, for those it depends upon to be erased in this way is strange.

When it comes to our ethical duties to other animals — especially if we ask them to work for our entertainment — we must use great caution and pay close attention when they say “nope.” Representation and respect should go hand in hoof.