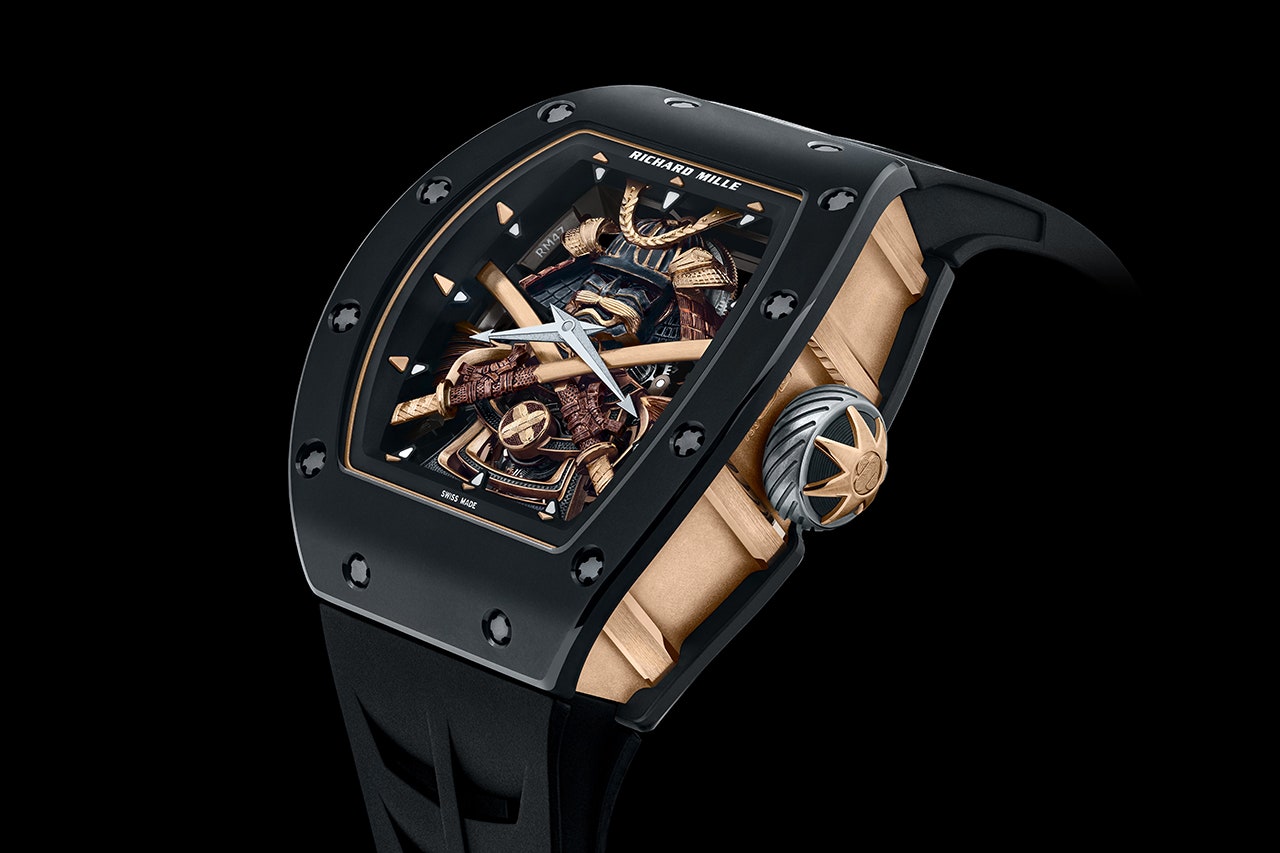 Jay-Z hardly ever puts a wrong foot with his watch collection. Whether he’s tracking down rare one-of-one Rolex pieces, wearing an interesting and unique vintage Patek Philippe Nautilus, or picking over the new releases to find the best of the best, he knows what he’s doing. Hov’s latest watch, a Richard Mille released in April of this year, fits the latter description. We’re used to seeing Richard Mille show off technical wizardry but this watch also tacks on the type of backstory you don’t usually see in watches.

This piece features a fully hand-carved samurai honor and two golden feathers, the mark of the historic Asano clan of samurai. The watch pays homage to the story of Asano Naganori, whose clan bided their time over almost two years to avenge their fallen leader after he was forced to commit seppuku in 1701. The plot was carried out by 47 rōnin (or leaderless samurai), which explains the reference number, RM 47. Find another watch brand that would make a watch inspired by a legendary tale of Japanese samurai. You can’t! Other brands can keep their racing, diving, and aviation exploits—RM needs only the Bushido, or moral code of the samurai, to invent the latest Jay-Z-worthy timepiece. Oh, and did I mention it costs a million bucks?

The World Cup has provided us with goals of both the spectacular and bone-crunching (USA! USA!) variety, stunning upsets, and even nil-nil draws that feel exciting. Also on offer: excellent watches. All-world defender Casemiro was spotted wearing AP’s Royal Oak with an openworked dial. There is probably no watch in the world with a higher approval rating among famous athletes than the Royal Oak.

Since signing on as an ambassador with Tag Heuer late last year, we’ve mostly seen Gosling wear the brand’s watches in controlled environments: press events and even limitless-budget Netflix films. Here we get to see Gosling get comfortable with the role of watch ambassador outside the office. He’s leveling up his timepiece, too. While he’s mostly stuck with a no-nonsense Carrera Three Hands thus far, this week he was spotted wearing a version of the watch with a chronograph. This has been a long time coming. When I first spoke to Gosling about Tag Heuer and asked him about watches with complications, he said, “I don’t think I’m there yet. I’m interested, though.”

Just a week after wearing a totally blue ceramic Royal Oak, James turned again to a very navy version of the same watch. While last week’s piece got its color from ceramic, this one relies heavily on the diamonds. There are, let’s just guesstimate, roughly one gazillion blue sapphires involved—on the dial, serving as hour markers, and set around the bezel. There’s not much you can say about this piece. The only fitting reaction is something like that old-timey cartoon wolf slamming his hand on the table while his jaw drops and his tongue unfurls for yards.

Harry Kane, in order to properly get ready for a match, apparently requires the following: warm-up shirt, warm-up shorts, little identification lanyard, almost-one-million-dollar watch festooned with every type of diamond, gem, and sapphire in existence. The high-low pairing here is truly outrageous.