Since arriving from China in 1998 to study at Newcastle, James Yu has come a long way. He is now a distinguished academic, an MBE and a Fellow of the Royal Society of Edinburgh. As well as being a Prospect member, he also sits on the union’s National Executive Committee.

Yet perhaps his greatest professional achievement is still to come, because as the innovation lead at SP Energy Networks, he is helping to build a more stable, more efficient, and, ultimately, net zero energy network for the UK. 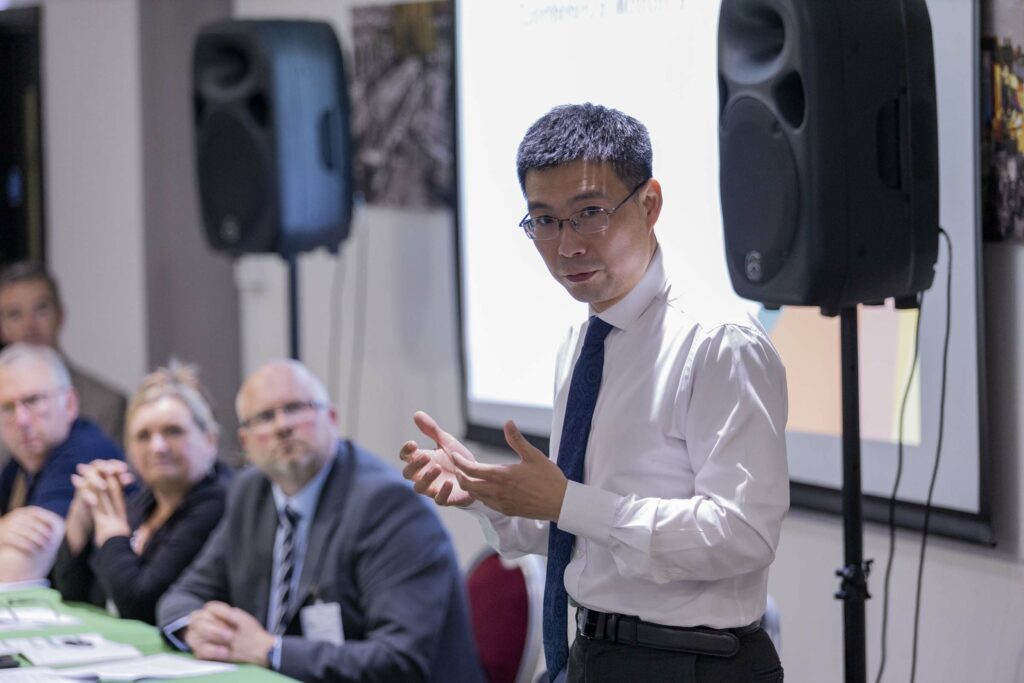 Think of renewable energy, and the mind conjures up wind, solar, geothermal or hydropower.

All those green energy sources are extremely important, but what of the network that carries electricity into our homes, offices and buildings?

Can we make the network itself greener, more sustainable, and use it to actively facilitate the switch from traditional generation to renewable sources?

This, in a nutshell, is the work and responsibility of James Yu, who is head of SP Networks’ Future Networks team.

“I’m accountable for securing the funding and resources for building the innovation team, as well as ensuring the project delivery to fulfil our obligations under license as a regulated business,” says James.

He describes having the opportunity and freedom to work on innovation projects as a real privilege. What started with four people in 2013 has grown to nearly 20, and an initial budget of about £4 million a year is now over £100m.

His projects, such as providing synchronised real time monitoring of the networks, have been recognised too. In 2020 James was awarded an MBE for services to the electricity industry and innovation.

James even demonstrated one of the innovations at COP26, during the World Leaders Summit on the first day, which was attended by 120 heads of government and other dignitaries, such as Bill Gates and Prince Charles.

“It was a very rare opportunity because it was on our doorstep, in Glasgow where Scottish Power is based. We were approached by the government just weeks before asking us whether we wanted to present examples of our work.  It was a real chance to show off innovation for the UK energy sector.”

What he presented that day was the LV Engine Smart Transformer, which will enable the conventional Alternating Current (AC) supply of the electricity network to more easily provide the low voltage Direct Current (DC) that is compatible with important low carbon solutions, such as heat pumps, solar panels and electric vehicles.

James’ work aims to improve all facets of the electricity network, such as stability, resiliency, and efficiency.

“The endgame is to generate net benefits for customers because we are funded by their electricity bills. Now, the measurement of that benefit is in sustainability, as well as a reduction of electricity bills and better reliability of the network,” he says.

However, there is no doubt that a clear focus is helping to achieve net zero.

“As we transition to net zero, we will initially have to import lots of electricity from our European neighbours, as well as supplying more customers with offshore wind. So, then you have the problem of importing energy when there’s no wind and exporting it when there’s lots of wind.

“Technically, our network is not really designed for that. It needs to have the capacity to hold its stability during those substantial swings.”

How optimistic are you that Net Zero can be achieved?

“I have two young boys so, for the sake of future generations, I am determined to do my bit to make the planet a better place. It is a personal commitment and more generally, I also believe that, given the technology advancements and given the financial powers, we can achieve it.

“That is why I think Prospect has a great role to perform because it’s about people, it’s about the diversity, it’s about how to protect colleagues and have the great sense of belonging.”

“Technology is the means, it’s not the purpose. The purpose is about people.”

Earlier this year James was named a Fellow of the Royal Society of Edinburgh, Scotland’s National Academy, which recognises excellence and contributions across arts, science, business, and public life.

This is on top of his MBE, a professorship at the Royal Academy of Engineering, his work as an advisor to the Welsh Government and travelling around the world as a STEM ambassador.

It’s a tremendous career that started with humble origins.

“I was born in China and came to this country in 1998. I landed in Newcastle, where I was doing postgraduate studies and then a PhD in Electrical Engineering. I needed to save every penny and worked as a cleaner at a local supermarket in weekends.”

James has been personally received by Prince Charles and Boris Johnson in recognition of his contributions to the industry. He said, “I am grateful for these recognitions and will continue to push myself as a result of my working-class background.”

James has been a Prospect member for more than 15 years now, initially joining because he felt it was important to maintain his voice, as a single employee, “in front of a big corporation.”

“I am so grateful to be working in the electricity industry, where I get to work alongside so many wonderful colleagues who have all helped me to develop and grow,” says James.

“The same is true of Prospect’s energy sector too. Last year I attended sector conference in London, and I was very proud to be alongside our members from across the energy industry.”

James has just been re-elected for a second term to serve on Prospect’s National Executive Committee, the union’s ruling body that is voted for by the entire membership.

Most of his first term was served during the lockdown, so there wasn’t much chance to meet and get to know his fellow NEC members in person.

Nonetheless, the work of the NEC, especially “its commitment to the rights of each individual member” made a great impression on him, and he is looking forward to contributing even more through the next two years.

James concludes: “I hope my children can be proud of me as a dad and I take satisfaction from delivering benefits for the community. I often say to colleagues that Scotland is a small nation but being small should not limit our ambition.

“As a British Minority, I have always pushed myself to not use this as an excuse but as an opportunity – in my view, it should never limit your potential, ambition or positive societal impact.”