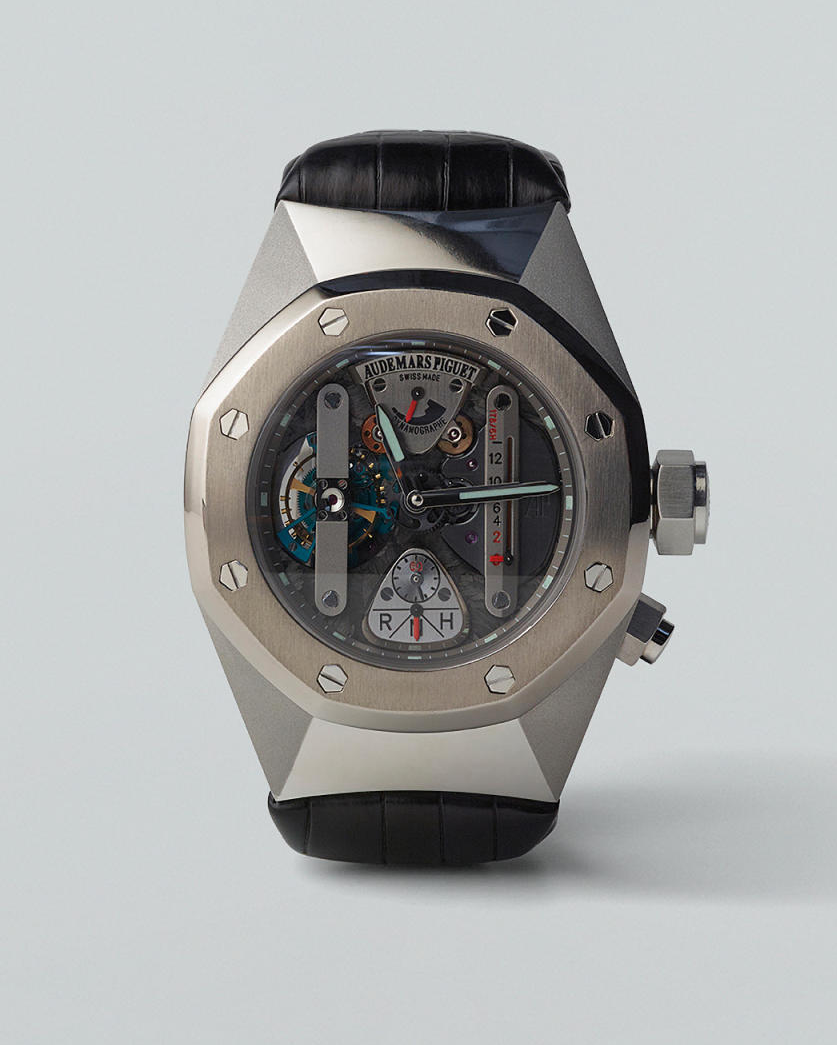 Back in October, Pharrell launched online auction service Joopiter to sell off items from his ELEVEN storage units piled with the luxury clothes and goods he amassed over his very stylish lifetime. He developed Joopiter because he knew his stuff was too good to sell on any other platform. “I’m not going to sell furniture on StockX,” he told the Financial Times. “I’m not going to sell, you know, 20-plus-carat diamond rings on [The] RealReal.”

One of the many items to come up for sale was a very significant Audemars Piguet Royal Oak Concept watch. In 2002, on the 30th anniversary of the original Royal Oak’s debut, Audemars took the model to space with the very first Royal Oak Concept, the “CW 1”. You can see why Pharrell—someone so interested in space that when given the chance to make his own watch he designed it to look like an astronaut on the surface of Mars—would be interested in this watch, which looks like it could command a fleet of X-wings at the flick of a button. Let’s indulge our nerdier side here. The vertical bar on the left is meant to absorb shock and protect the tourbillon, while the one on the right represents the power reserve (how much longer the watch will tick without being wound). The dynamographe at top shows how much torque is going to the mainspring (a watch’s engine)—if it leaves the desired zone, the wearer knows to wind it back up.

Upon release the CW 1 was already extremely limited: only 150 were made over its two years in production. But the base number is never the real number when it comes to watches. As the listing for this piece on Joopiter explains, 14 one-of-one CW 1s were made specially for AP’s most important clients. One of those VIPs? None other than Pharrell Williams. But like many auctioned-off goods, it would have been reasonable to expect Pharrell’s wonders to fade into the ether of the 1%. However, the watch popped up on Frank Ocean’s Instagram this week. You can tell because of the watch’s unique identifying feature: the teal components of the tourbillon at 9 o’clock. (Joopiter declined to comment and representatives for Ocean did not immediately respond to a request.) Ocean and Pharrell have collaborated in the past, the latter producing a few of the former’s songs. Ocean, like the rest of us, also wants to know how Skateboard P keeps himself looking so youthful. “It’s been all these years,” he told GQ, “and Pharrell still hasn’t given us the keys yet. He just says ‘exfoliate,” but it’s not just “exfoliate’: We need more keys.” Maybe this watch can help Ocean access Pharrell’s fountain of youth.

Davidson sure gets around when it comes to…watches. $35 Casios and a pair of gem-set Rolexes have given way to his latest wristwear, a racing-inspired Chopard. The brand’s Mille Miglia (thousand miles in Italian) is inspired by the cars used in the legendary Italian race. The strap even looks like a tire and the date is set against the race’s cartoonish arrow-shaped logo.

The Paul Newman, the James Bond, the Clint Eastwood, and the…James Cameron. Turns out you don’t have to be a Hollywood action star to get a watch named after you if you do the stuntman-worthy stuff in real life. When Cameron dived to the deepest part of the ocean, the Mariana Trench, in 2012, he did so with a Rolex designed especially for the journey. To celebrate his journey, Rolex released this special version of the Deepsea with a dial that fades from dark blue to black and the word Deepsea written in lime green. This version of the Deepsea became known as the “James Cameron.”

This rose-gold version of the Nautilus goes against most of what made the now-discontinued 5711 so beloved. Rather than rugged stainless steel, Mitchell’s is made out of precious rose gold. The integrated metal bracelet is swapped out for a brown alligator-leather strap. The unfussy dial is packed with features like a seconds subdial, power reserve, and moon phase indicator. Just goes to show that the Nautilus looks great whether it’s at its simplest or souped up.

Former Indiana Pacer Malcolm Brogdon was known as “The President”; current Pacer floor general Haliburton wears the President. Haliburton, as befits his no-nonsense game, is rocking one of Rolex’s most traditional and elegant models. His Day-Date is simple: gold, Roman numerals, not a pinch of gems or flash—it’s the watch equivalent of a 40-assist-zero-turnover streak.