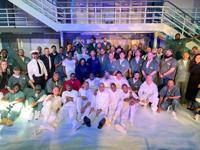 STERLING – “There are African religions that believe you are not truly dead until you are forgotten,” a retired Unitarian Universalist minister told me last week from inside the walls of the Sterling Correctional Facility.

When Corey Johnson was put to death by lethal injection in January 2021, Bill Breeden promised the condemned killer and his family that he would n be forgotten.

“Tonight, I feel like I kept that promise,” Breeden said after attending the opening of “If Light Closed Its Eyes,” a groundbreaking new play written, developed and performed by more than 50 incarcerated residents of the prison located 120 miles northeast of Denver.

“His name is in this play – and that means his name will live forever.”

The goal of the University of Denver’s Prison Arts Initiative creative team was to better understand the bones of the criminal justice system at this moment in history. Breeden was one of more than 100 who were interviewed for the nearly three-year project, along with victims, family members, legal officials, politicians and other spiritual leaders.

Their words were transcribed and painstakingly shaped into what is called a “verbatim documentary play” that premiered July 20 in the most authentic setting that any live play about the prison system ever could be: Deep within the sprawling, barbed bowels of the largest prison in the Colorado Department of Corrections system.

Breeden traveled to Colorado to see the play from Indiana. That’s where, just five days before Joe Biden’s inauguration, Johnson became the 12th of 13 men to be executed in the final six months of Donald Trump’s presidency after he ended a 17-year hiatus on federal executions.

Johnson was a 23-year-old drug trafficker who left seven people dead in a shockingly violent killing spree in Richmond, Va. His lawyers argued that Johnson was mentally impaired from a physically abused childhood. That he was abandoned by his drug-addicted mother at age 13 and eventually aged out of the foster-care system. At his execution, witnesses in the death-chamber cheered when Johnson was pronounced dead at 52.

Not Breeden, who served as a spiritual advisor to inmates on death row for 30 years. When he met Johnson just two weeks before the execution, he became the first in-person visitor Johnson had been allowed to see in his 29 years on death row.

“I spent about 30 hours with Corey, and that’s the most real 30 hours I’ve ever spent with anybody,” said Breeden, who called ministering to Johnson in his final days “probably the greatest honor I’ve ever had in my life –  and it’s also probably broken me more than anything has ever done.”

Breeden condemns Johnson’s crimes but not the man, which is just some of the difficult terrain “If Light Closed its Eyes” tackles through words, art, live music, movement and dance for a once-in-a-lifetime immersive theater experience that rattled the capacity audience to its core like the shaken bars of a prison cage.

“We worked to try to tell a 360-degree story that is incredibly complicated and full of light and dark in a meaningful and innovative way,” said DU Prison Arts Initiative founder Ashley Hamilton, who is also the director and one of the actors in the play.

Another was none other than Dean Williams, Executive Director of the Colorado Department of Corrections’ 19 prisons. Williams is a kind of minister in his own right, zealously preaching the gospel of normalization within the state prison system as the best possible way to ensure success when the incarcerated reintegrate into the outside world.

“We are showing the world how it can be different,” Williams said after essentially playing himself in the story. He’s been a lightning rod in the national criminal-justice conversation because he has the audacity to believe that justice and mercy can live together in the same cell block, alongside accountability and redemption.

“Every day there are forces working against me who want to go back to the Dark Ages,” he said. “But this has to be a place where things can get better, not worse.”

The DU Prison Arts Initiative exists to create opportunities for incarcerated people to develop healthy, meaningful artistic outlets to express themselves. It stages plays like “Antigone” and “One Flew Over the Cuckoo’s Nest,” produces both a podcast and a prison newspaper, coordinates fine-art showings and runs the nation’s only statewide prison radio station. By giving prisoners a purpose, a project, a goal and some positive reinforcement, Hamilton believes they are shifting the dialogue around the value we place on incarcerated lives.

The team behind “If Light Closed Its Eyes” cast got plenty of positive reinforcement from their initial audiences, who were treated to an immersive experience that starts the moment they drive into a parking lot surrounded by miles of wire and soul-deadening gray concrete.

After passing through a security screening and a quick orientation, they are led deeper into the prison grounds than most people ever see. The performance actually begins in “the yard,” on the long walk to Cell Block 4. And it’s a living, breathing, 3-D art show. Sixty inmates line both sides of a sidewalk now reimagined as “The Hallway of Humanity,” each wearing drab institutional gray that stands in stark contrast to the colorful paintings they hold that were created by an incarcerated artist.

As you pass, the men repeat poetic mantras such as, “I still believe there is value in me,” and, “There is more to me than the decisions I’ve made.” Daniel Malcolm, a man with the words  “DEAD MEN TELL NO TALES” tattooed across his face from one ear to the other, tells this very living tale: “The majority of men in prison are there because of the choices that were presented to them in life.” Along the way, you are encouraged to stop, look and listen to these men in ways you may never have felt safe in another setting. And what you see is just … people.

The capacity audience of 100 mingled corrections officials with the legal crowd, formerly incarcerated parolees, family members of victims and performers, police officers, adventurous theatergoers and many of those whose interviews became the basis for the script. And, talk about realism: Dozens of extras help set the mood in the form of jailhouse flies constantly buzzing in the audience’s faces.

Throughout the ambitious evening, the audience is given much to contemplate about accountability, regret, God, trauma, dignity, racism and the lasting damage that is done to victims and their families that can only be salved by time, accountability, education, forgiveness and the kind of healing than can only be achieved through honest, restorative justice. Difficult questions are asked. Yes, these men have done things they can never undo. And they should pay for their crimes. But does time spent in prison actually pay for anything? To anyone?

The best plays feature complex and sometimes contradictory characters, and they don’t come much more of either than Breeden, now 70, who was brought up from birth to be a Nazarene preacher in an Indiana town where no person of color could be out after sundown. “I was raised as a racist fundamentalist Christian,” said Breeden, who began preaching at 15. “I thought I was preaching the teachings of Jesus, but most of what I was preaching was just (bleep),” he said. “I was a racist, ignorant, white preacher boy who thought he knew everything and didn’t know (bleep).”

His conversion happened when he encountered a hungry Black woman in the alley behind the supermarket where he worked as a teen. It was an encounter that started him on a lifelong journey of challenging old assumptions. “I call her Jesus,” Breeden said, “because she changed my life.”

The play itself takes place in a large cell house – three horizontal stories of showers and jail cells that slide open to the sound of a loud metal clang and from which actors emerge to tell their stories.

On the top tier, there is a large blank canvas that – taking a cue from a Cloud Cult concert –  becomes a fully fleshed painting throughout the evening. A cellist provides a soundscape against a cacophony of storms, phones and a crying baby. By the end of the play, dozens of real-life characters have invited the audience to confront their inherent biases and prejudices.

That execution, he added, “was the worst thing I have ever been through.” In part because Johnson was put to death while sick with COVID. But on this night 30 years later, watching this play, Breeden  said, “I feel like these men have given me a real gift.”

The plan was for “If Light Closed its Eyes” to be performed for two weekends, but yet another outbreak of COVID has canceled this second week, reducing their nearly three years of work to a precious three public performances. But plans are in the works for a production of “Godspell” at another state prison this December.

Williams believes “we are changing the system … one theater show at a time.”