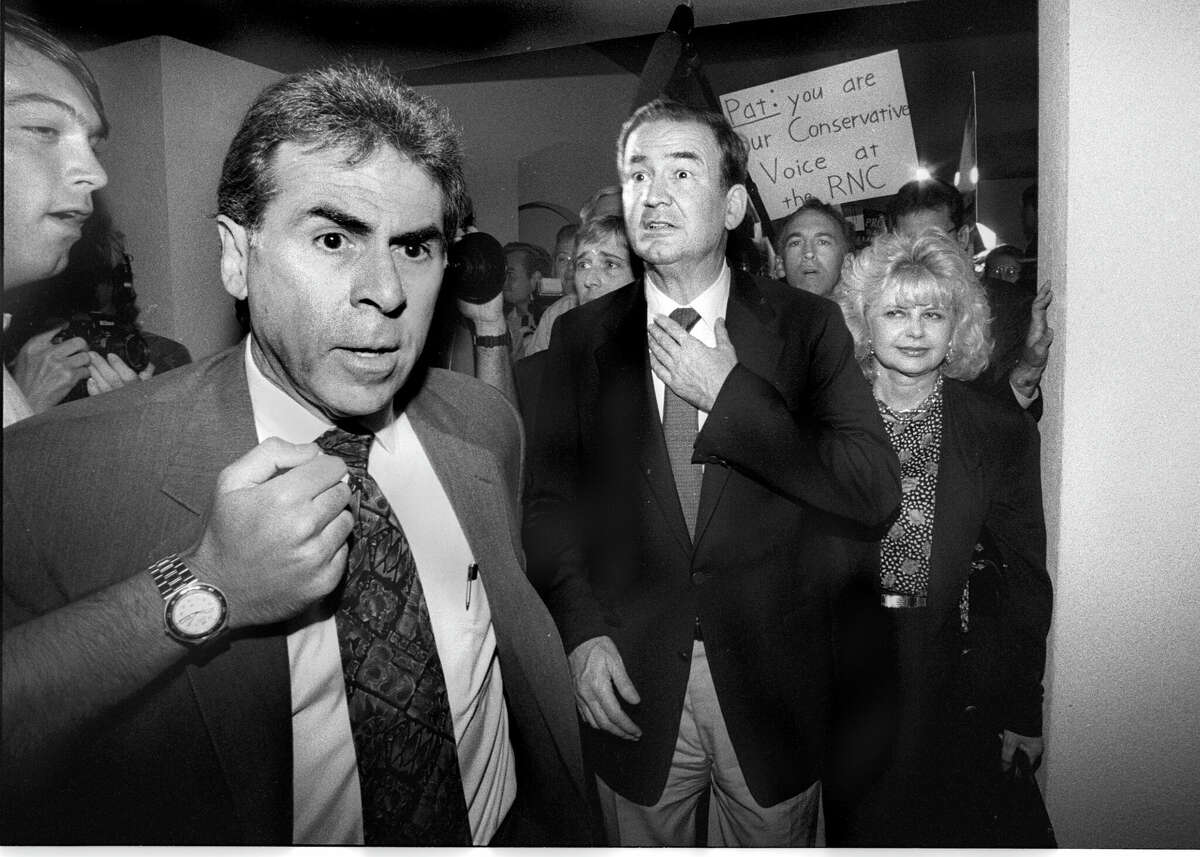 Standing at the podium inside the Houston Astrodome, Pat Buchanan glowered as he painted a picture of America’s greatest enemy in the post-Cold War era—the enemy within.

“My friends, this election is about more than who gets what. It is about who we are. It is about what we believe, and what we stand for as Americans,” Buchanan warned. “There is a religious war going on in this country. It is a cultural war, as critical to the kind of nation we shall be as was the Cold War itself, for this war is for the soul of America.”

Read more about Houston in the ’90s

Buchanan’s remarks, made in the first primetime slot of the Republican Party’s 1992 National Convention in Houston, signaled the beginning of a new era in American politics—one of recrimination, grievance-mongering and the demonization of secular society.

Gathered inside Houston’s once-state-of-the-art domed facility, members of the Grand Old Party listened as Buchanan called upon conservative Americans to take up rhetorical arms against those who threatened their traditional values, likening the coming societal battle to that of armed U.S. soldiers backing down a mob during the 1992 Los Angeles riots.

In the three decades since Buchanan popularized the phrase, “culture war” has shifted from a tactic used by fringe right-wing outsiders to an organizing principle at the core of American conservativism. The language of culture war has embedded itself in U.S. discourse to the point of ubiquity—terms such as “radical,” “establishment” and “political correctness” becoming commonly understood verbiage used on either side of the aisle. As recently as 2020, President Donald Trump referenced the culture war as the general cause to which Republicans must rally in their campaigns against Democratic challengers.

This is a carousel. Use Next and Previous buttons to navigate

“We are in a culture war,” Trump told RealClear Politics in the heat of his failed 2020 presidential reelection campaign. “If the Republicans don’t toughen up and get smart and get strong and protect our heritage and protect our country, I think they’re going to have a very tough election.”

Chief ingredients in a culture war are the presence of outsiders—immigrants, minorities and the poor; marginalized groups that can be pointed to as the source of economic pain being experienced by a nation. Decades before Trump championed the construction of a wall at the U.S.-Mexico border, Buchanan made a 1992 trip to Texas’ Smuggler’s Canyon during his attempt to challenge the sitting Republican president in the primary. There, he expounded on the need for a “Buchanan fence” to safeguard the U.S. against immigrants he claimed were responsible for the nation’s worsening drug epidemic.

“I am calling attention to a national disgrace,” Buchanan told the modest crowd at Smuggler’s Canyon that included, among other elements, a soda stand run by Mexican immigrants selling refreshments to Buchanan supporters. “The failure of the national government of the United States to protect the borders of the United States from an illegal invasion that involves at least a million aliens a year.”

Buchanan’s stumping at the border, and his barnstorming stops in dying rural towns where he rattled cages about failed globalization efforts undertaken by Bush Sr., came months before his speech in Houston minted culture war as part of the U.S. lexicon. By the time of his August 17th convention speech, the CNN “Crossfire” pundit and former speechwriter for President Richard Nixon had completed his spectacularly failed challenge of President George Bush Sr.

However, the three million ballots cast in his favor were enough to merit an olive branch from his opponent in the form of a main-stage, primetime speaking slot at the party’s national convention.

As American political historian Nicole Hemmer notes, Buchanan used this invitation to set the tone and agenda for the party’s future and spent his time on the dais painting his picture of a post-Cold War world where the walls were closing in on Republicans—remarks that should’ve landed easily in an oil and gas town like Houston in the early ‘90s.

“There’s a big recession in the early 1990s that really drives home—particularly for people in industrial fields—the kind of decline and deindustrialization they’ve been experiencing for a couple of decades at that point,” Hemmer says. “Then you have this new media landscape with conservative talk radio and cable television, particularly cable news and channels like MTV and Comedy Central that really are promoting the blend of entertainment and politics. And that particular blend really does advantage outrage and provocation. And the culture wars are so perfectly suited for that media environment.”

A city at odds with itself

Houston proved ripe grounds for conflict in the days leading up to and during the 1992 RNC. City and county officials had spent more than a year preparing for the arrival of GOP delegates at the Astrodome. The venue was converted into its football configuration and a third of the floorplan was cut with draping to provide a backdrop for speakers, who addressed a crowd clothed in red, white and blue carrying signs thanking Ronald Reagan and shouting “Knock ‘Em Flat, Pat!”

Outside the walls of the Astrodome, protestors from different groups faced off on issues ranging from abortion to police brutality and funding of the arts. Activists with the National Organization for Women gathered at the northwest corner of Mulworthy and Kirby to denounce the GOP’s anti-abortion platform, clashing with pro-life counterprotesters carrying plastic baby dolls. Members of Queer Nation and the AIDS Coalition to Unleash Power (ACT UP) infiltrated a prayer luncheon hosted by conservative televangelist Jerry Falwell outside the West Loop Holiday Inn, raising signs with emblazoned with the words “Hate is not a family value.”

Rapper Willie D, fresh from a break with Houston rap group the Geto Boys, led a group of local Black artists carrying a pine box casket in a demonstration against police violence and government censorship. Hundreds of young Houston artists formed a drum corps by the Menil Collection to decry Bush Sr.’s flagging support for the National Endowment of the Arts.

On Fannin Street, conservative demonstrators prayed on their knees behind barriers outside the offices of the Planned Parenthood while HPD officers blanketed the downtown area in preparation for the arrival of out-of-state delegates. In the days leading up to the convention’s start, recovering drug addicts pruned foliage on Houston roadsides with chainsaws in return for community service, part of a beautification effort ahead of the national event.

Thus the scene was set for Buchanan’s brand of culture war politics. While Ronald Reagan imitators like New York Congressman Jack Kemp made lofty speeches at the 1992 convention appealing to the “bleeding heart” of Republicans, Buchanan spoke to attendees’ spleens, leveraging sharp attacks tailor-made for a media economy where politics as spectacle was becoming business as usual.

“Buchanan’s speech is pretty dark and angry, although Buchanan himself, because he is a very practiced pundit, is able to get laugh lines and a few smiles,” Hemmer says. “If you watch the video, [the crowd] is really responding to Buchanan, he has the crowds very much on his side when he’s talking about feminism and liberals.”

NBC footage of Buchanan’s address bears out Hemmer’s appraisal: Bush supporters laughed along hesitantly as the former speech writer mocked liberal “radicals” gathering in New York City for the ‘92 Democratic National Convention—an event Buchanan described as “the greatest single exhibition of cross-dressing in American political history.” By the end of his speech, the RNC crowd was fully in the pundit’s hands, joining the Buchanan Brigade in cheering as he built toward his towering, war allegory-strewn conclusion.

During the week of the convention, Governor Bill Clinton made remarks to the press noting the shifting tradewinds within the Republican Party that were demonstrated at the convention.

“This party, this Republican Party has obviously been taken over by the extreme, intolerant right wing of the party,” Clinton told members of the media on August 20, the RNC’s closing night. “You look at who has been featured. It’s the Pat Robertson, Pat Buchanan, Jerry Falwell, Phyllis Schlafly wing of the party. They control it now. They’ve got George Bush right where they want him.”

Voices wanting to be heard

This coming together of Republicans’ right and centrist elements in the Houston Astrodome, however, would not be enough for Bush Sr. to win reelection. While he hosted right-wing commentators like Rush Limbaugh in his presidential convention box, public sentiment was shifting against Republicans, and after a 12-year hold on the executive branch, the incumbent went on to lose by five-and-a-half points to Clinton, earning 37.5 percent of the general vote and finishing ahead of independent candidate Ross Perot, a Texan who garnered a surprising 19.7 million votes in a third-party bid.

Bush’s failed reelection would’ve likely occurred even in the case of a total capitulation to neoconservatives like Buchanan, but one thing that Houston’s 1992 RNC proved was that culture war would become a major vehicle for political messaging in ensuing decades—a powerful form of communicating grievances that persists to this day. It is a method not without its flaws, Hemmer notes, the chief of which being the culture war’s inability to deliver more than a promise of punishment against voters’ enemies.

“[Culture war] doesn’t necessarily address people’s material needs,” Hemmer says. “A lot of times people’s frustrations are coming out of a sense that government isn’t responsive to their needs. They feel like they’re declining economically or that they’re losing power in a variety of ways, and their voices aren’t being heard.

“If you want to get people fired up, culture war issues are a great way to do it,” Hemmer says. “But it drives a lot of people away because culture war is inherently and ultimately negative.”

In the years since the 1992 Republican National Convention, the seeds of right-wing angst planted in the Astrodome and delivered to home television screens across the nation have borne undeniable fruit as to the manner in which politics is conducted in the United States. The names of culture war’s adherents may be different, with Buchanans and Limbaughs giving way to Trumps and Carlsons, but the appeals are as similar as they are omnipresent any time you turn on a screen or pick up your phone.

On the dais in Houston, Buchanan hammered “abortion on demand”—a phrase parroted by Lindsey Graham as recently as last month in his proposal of a sweeping national bill banning the medical practice after 15 weeks. Buchanan also championed “school choice,” a term that has since become a Republican call-sign for the privatization of public education and a core interest of top Texas Republicans such as Senator Ted Cruz and Governor Greg Abbott.

In a 2017 interview with The Daily Beast, Buchanan himself recognized the lineage of culture war stemming from his 1992 campaign.

“I was relatively astonished when [Trump] came out against trade and immigration—and to ‘Make America First’” Buchanan said. “That’s on my [campaign] hats.”

Read more Houston in the ’90s