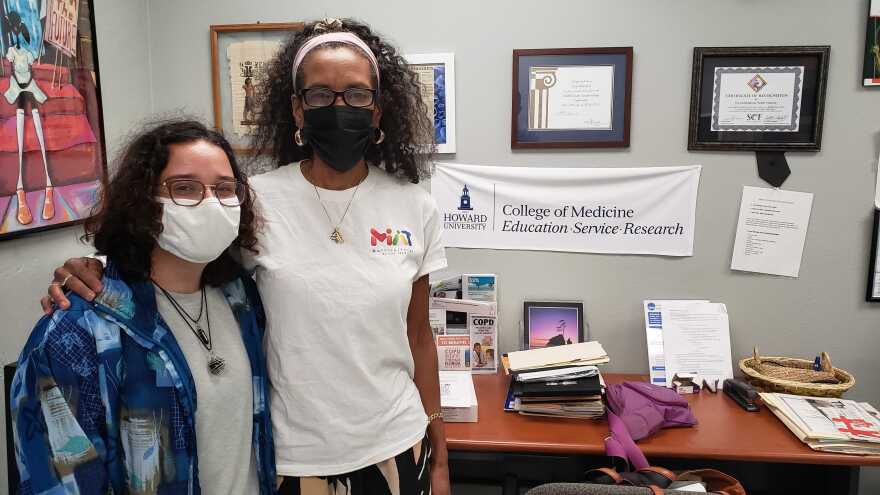 “I have to laugh and look at them and say, ‘you’re going to tell me that, and I’m a doctor,’” said Merritt, the founder and executive director of the Multicultural Health Institute (MHI) in Sarasota, Florida. “But they feel comfortable, to be honest with me, because that’s how people really feel.”

Merritt has dedicated her career to improving access to public health resources for minority communities, and as a Black physician, she gets a first hand look at the barriers to care.

She founded the MHI in California in 1995 with a group of doctors and community advocates.

In 2006 the MHI headquarters relocated to Sarasota, after Merritt had moved there to help supervise her mother’s care following a cancer diagnosis.

The MHI’s office that Merritt shares with an intern is tucked into the corner of a Goodwill job connection center in Newtown. The office walls are crowded with certificates, brightly colored posters and newspaper clippings highlighting the work of Merritt and the institute.

Before the pandemic, the MHI held wellness fairs, offering free health screenings for things like blood pressure and diabetes. Merritt led a long term study into healthcare in Sarasota’s historically Black neighborhood of Newtown. And the institute trains volunteers, called community navigators, who connect people with healthcare resources, from help with prescriptions to housing and food assistance.

When COVID-19 hit, the MHI responded, tracking the spread of the disease and organizing vaccination drives.

In a video on the group’s Facebook page from March 2021, Merritt chatted through the open window of a car with two women at a vaccination drive outside a church in Bradenton, a city on Florida’s gulf coast, just north of Sarasota

“How do you feel, mentally, after the second dose?” she asked.

“Relieved. I’m out in the community all the time,” one of them responded.

Pop up vaccine clinics like this were a way for Merritt to bridge a gap in healthcare.

Merritt said MHI was able to look at the data and show how COVID was affecting the community differently in different zip codes.

In North Sarasota, where the population is mostly Black and Latinx, they found the positivity rate was higher than neighboring communities.

“These are the essential workers,” Merritt said. “These are the people that couldn’t sit home, and work from home. These were multi-generational homes.”

She said she understands why there’s mistrust of healthcare providers from a community that has had firsthand experience with a segregated health system.

“While vaccines were being sent to gated communities and people’s friends, that did not do much to engender further trust in the power structure that rules over people’s lives.”

But she said access to information, testing and vaccines were bigger barriers than mistrust.

Overcoming those barriers meant working with public health agencies and other partners to make vaccines available in the community.

“And then we would do literally hundreds of people on a Saturday and a Sunday at a church or a community center. And we’re able to literally level the playing field.”

She said former interns have gone on to become lawyers, doctors, artists … but they all have an interest in public health.

“The pandemic kind of just opened my eyes to the large swath of failures that exist, kind of at all levels of the public health field,” former intern Ormond Derrick said.

Derrick, who has a bachelor’s degree in political science and global health from Sarasota’s New College of Florida, developed a COVID-19 access guide in English and Spanish for MHI, and he helped get people things they needed, like information on testing sites, or how to use pulse oximeters to measure blood-oxygen levels.

“It’s a very simple intervention tool that saves lives,” Derrick said of the pulse oximeter. “I’ve saved my family’s lives, specifically, because I use the same skills I learned at MHI to help them when they were diagnosed with COVID.”

Derrick said MHI shows how the healthcare system should work. He called it “an incredible model of how to do health advocacy and health equity work and really to replicate it no matter what.”

MHI intern Olympia Fulcher said working at the MHI has shown them a different way of thinking about public health.

“You don’t have to be a doctor or an epidemiologist to really make a difference in a public health setting,” they said.

Fulcher, who has a degree in computer science, has been building an app so community members who don’t have internet access can find useful information about COVID-19 on their phones.

“And that was really what cemented it for me, that even though I feel like I’m just crunching numbers all day, it really is making an impact in the community,” they said.

Fulcher described Merritt as “one of the most inspiring people I’ve ever met. She’s had a huge impact on me. Huge.”

Derrick echoed that sentiment. “She’s like the closest thing to an angel I think I’ve met but of course, she is just an extraordinary human being at the end of the day,” he said.

Merritt said her own career was shaped by great role models. Now she’s paying it forward and helping shape the next generation of public health advocates.

“I’m grateful that I had incredible models, and that I’m just part of a link in a chain. And I hope to inspire other young people.”