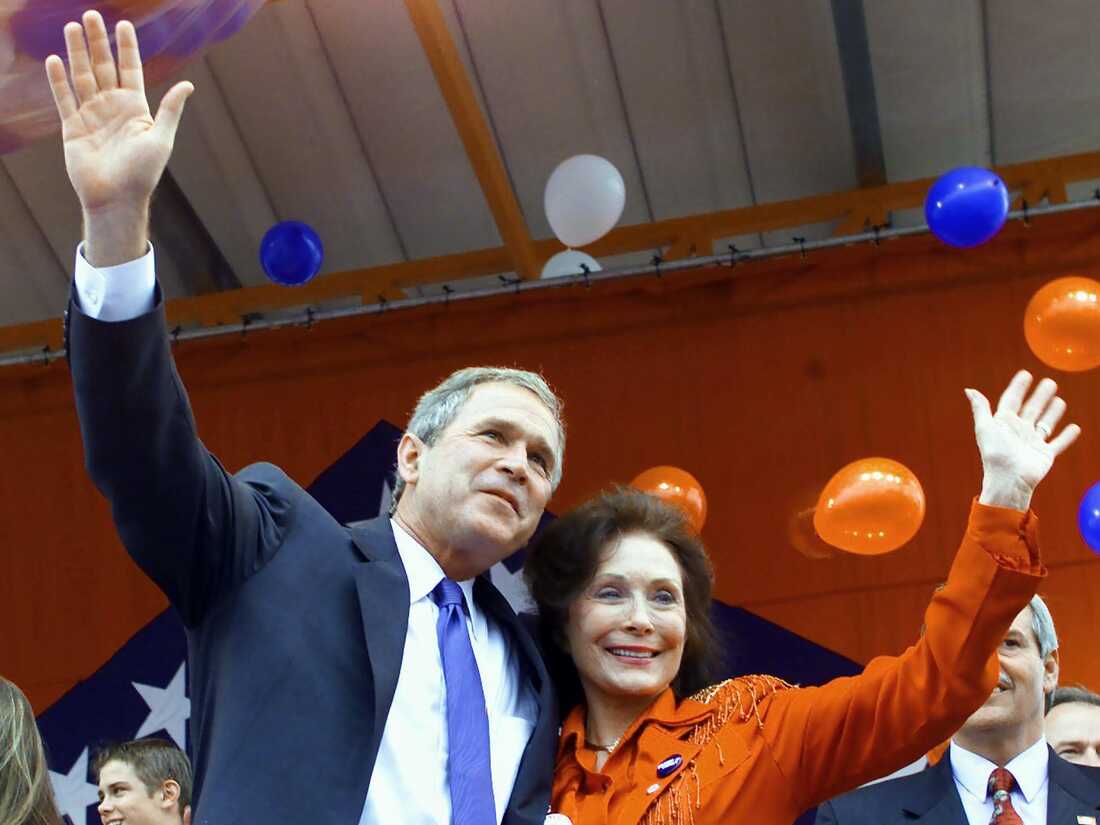 Millions mourned the passing of country music legend Loretta Lynn, who died at the age of 90 on Tuesday, with obituaries and tributes recalling her songs, her voice, her authenticity and her charm.

There was relatively little mention of her politics.

Some stories were written recalling the feminist impact of her 1975 hit “The Pill,” and even her earlier standby: “Don’t Come Home a Drinkin’ (With Lovin’ On Your Mind).”

Moviegoers enchanted by actress Sissy Spacek’s Oscar-winning portrayal of Lynn in the 1980 film Coal Miner’s Daughter could impute to her any political attitudes they liked.

But Lynn was very much a part of politics at several stages of her career.

At the peak of her fame in the 1960s and 1970s, Lynn was part of a key change in the politics of country music — a change akin to the shifting partisan leanings of the music’s most loyal fans.

That change made a big difference in American politics when it happened, helping to elect Republican presidents such as Richard Nixon, Ronald Reagan and both Presidents Bush.

And it continues to make a big difference today.

She once told an interviewer she had gone with Trump in part because her audiences would have booed her if she had endorsed Hillary Clinton. (The 2016 Democratic nominee had alienated some country music fans with what seemed a slighting reference to the phrase “Stand By Your Man,” the title of Tammy Wynette’s ethos-defining song about marriage.

Surprise at Lynn’s alignment with Trump was a reprise of the reaction some of her fans had when she appeared on stage in 1988 with the Republican nominee for president, George H.W. Bush.

On that occasion, referring to one of her own signature songs (“You’re Looking at Country”), Lynn told the crowd and the cameras that looking at Bush was “looking at country.” And in case there was any doubt, she leaned into the microphone and proclaimed: “I know George Bush, and he is country.“

That provoked a few smiles and much head scratching at the time. Bush had been born in New England and raised in Washington, D.C., as the son of a senator from Connecticut, Bush went from a super-elite private prep school to Yale. After Navy service and a few years in Midland, Texas, setting up an oil business, he moved to the Silk Stocking section of Houston and from there back to Washington, where he was a member of Congress, director of the CIA, chairman of the Republican Party and Ronald Reagan’s vice president. (She later also campaigned for his son, George W. Bush.)

Of course, the senior Bush had spent much of 1988 doing his best to earn Lynn’s description, getting photographed driving a truck and professing his deep love of deep-fried pork rinds.

But none of that really mattered. If Loretta Lynn said Bush was country, in a sense, he was. She was not inventing a false biography for him; she was communicating a certain shared faith with her audience. She was telling them Bush would act as their guardian, defending what her fans regarded as America (and certainly doing that better than that year’s Democratic nominee, Michael Dukakis, the technocratic governor of Massachusetts).

Lynn was always close to her audience. Her Butcher Holler, Ky., origins shone through all she said and sang. She embodied both want and aspiration, both humility and genuine pride that could be fierce.

She was also part of a generation of country music stars in the 1960s and 1970s who defined their public personae largely in contrast with the folk and rock stars of their day.

If the Woodstock Nation opposed the Vietnam War while backing civil rights and radical lifestyles, the Nashville sound was in tune with traditional American social norms. Country music artists seemed to be circling the wagons in defense of America as they – and their fans – remembered it.

And Republican candidates since then have striven to identify themselves with the country artists’ sense of hearkening to heritage, to the way things were. Reagan had buttons that said “Let’s Make America Great Again” long before Trump shortened the motto and put it on a hat.

If Bush Sr. was an unlikely hero of the countryside, Trump was even more so. Trump did not have even ephemeral connections to country life or country music, but he forged a bond of affinity with those who did.

He was, of course, from a wealthy family in New York. But he had created a tough businessman character on a reality TV show and was able to translate that into a “tell it like it is” political persona as a candidate. He also made a show of embracing the pop culture tastes and social attitudes of blue-collar America, especially those of rural working-class whites.

Trump was able to tap the feisty, often defensive spirit that has long informed the Appalachian region (broadly defined) that spawned much of what Americans came to call “country western.” It is akin to the fiercely defiant spirit that animates J.D. Vance’s memoir Hillbilly Elegy and that attracted Trump’s endorsement of Vance’s Senate candidacy in Ohio.

It was not always a term of derision or dismissal, Malone notes. But when it became so for some in the music business, it served as both fighting words and a shared badge of honor. Malone said he saw country singers “privately described themselves as hillbillies but responded bitterly if someone else called them that.”

What Wallace and later Nixon and Trump tapped into was the bitterness in that response.

Lynn was always about the private pride made public, and the sweetness of the bond. It was why people were surprised to find they might have differences with her when they did, and why they could get past those differences to honor her art and her life.

For generations, those voters had been the bedrock of the Democratic Party.

No one thought a single country singer, no matter how beloved, could confer the presidency on Bush or any other candidate. But the motivations for Lynn’s endorsement mattered because they expressed changes underway for years in agricultural America and among middle-class voters who worked for wages and did not have a college degree.

For generations, those voters had been the bedrock of the Democratic Party. In the South, the Democratic Party had been the dominant political identity since before the Civil War. With the Great Depression and the New Deal in the 1930s, Democrats had greater appeal in the rest of rural America, even while remaining strongest in the rural South. Franklin D. Roosevelt attained the status of a saint.

George Vecsey, the New York Times writer who collaborated on the memoir, Coal Miner’s Daughter (the basis for the film by that name), reports that Lynn inherited some of that reverence from her father.

But in the latter half of the 20th century, the country changed and the allegiances of many artists changed as well. In the years of Lynn’s early career, in the 1960s and 1970s, when those folk and rock heroes were increasingly identified with causes of the left, the issues drove away many traditional Democrats.

Many went to Alabama’s firebrand Gov. George Wallace, an ardent segregationist who ran for president as the nominee of the American Independent Party in 1968.

Never a threat to actually win the White House, Wallace was nonetheless a threat to block the Republican Richard Nixon’s bid. He did win two Southern states, and had he won a few more he could have denied Nixon needed to win an outright majority in the Electoral College.

In that bid, and in subsequent tries for the Democratic Party’s presidential nomination, Wallace relied heavily on major figures in country music, such as Roy Acuff and Ferlin Husky, who led star-studded shows for Wallace at the Ryman Auditorium, the original site of the Grand Ole’ Opry in Nashville and the “mother church of country music.”

Wallace got only a minor fraction of the national popular vote but he carried several states in the Deep South and threatened to deny Nixon a majority of the votes in the Electoral College. That would have thrown the election to the House of Representatives, where the outcome was far from clear.

Among those who noticed was Nixon himself, who had recruited country entertainers for his own campaign in 1968 and would do so again in his reelection effort four years later. Along the way, Nixon made sure he visited the Ryman Auditorium and saluted its denizens. The Country Music Association responded with a commemorative album called Thank You Mr. President. It featured what was said to be his favorite, Merle Haggard’s anthemic “Okie from Muskogee” – and also Lynn’s “Coal Miner’s Daughter.”

Not all country artists have leaned to the right, of course. The guitar demigod Chet Atkins was a liberal with a lot of lines out to other kinds of musicians. Willie Nelson, author of hits for Patsy Cline as well as for himself as far back as the 1950s, has been a populist on the left who campaigned for the last Democratic governor of Texas, Ann Richards, as well as other politicians. Dolly Parton has been a longtime advocate for LGBTQ rights.

The Dixie Chicks were sailing atop the country charts when their opposition to the second President Bush and the Iraq War knocked them off course. More recently, we have seen country superstars such as Taylor Swift turn away from years of an apolitical posture to speak with the voice of their own generation.

The same could be said for Maren Morris, Kacey Musgraves and others who have raised money and spoken out for causes far afield from the Nashville vibe of half a century ago.

In time, it is possible we will look back and see them as transformative as well.