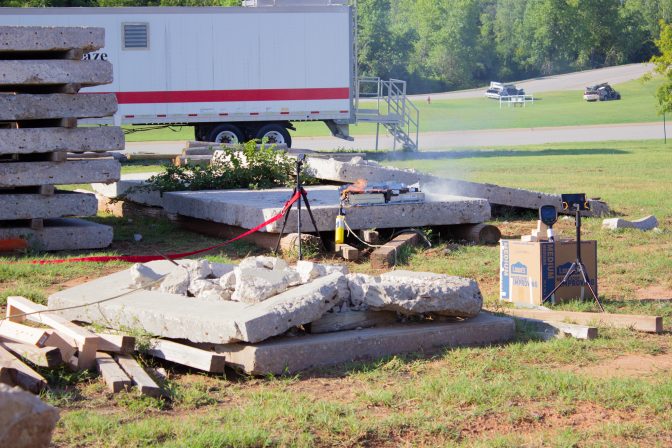 Instructors and administrators from Francis Tuttle Technology Center gathered around an electric vehicle (EV) battery that had been set on fire at a training area for the Edmond Fire Department. On a warm August morning, smoke billowed out of the sides, cells popped intermittently, and flames rose to about two feet high at their apex.

More electric vehicles on the road means more questions about how emergency responders should adapt to the new technology at car crash scenes.

The demonstration is to prepare Francis Tuttle for a new program it’s launching this fall that aims to train first responders on how to prepare for and manage alternative energy vehicle fires. The program is run by Onward OKC, a collaboration of five technology center districts in Central Oklahoma.

According to Jesse Benne, Edmond Fire Department Captain of Prevention, one of the main challenges with EVs is there’s little standardization across car makes — from where the battery is located to the chemical makeup of the lithium inside.

Flames pour out of the side of an electric vehicle battery at an Edmond Fire Department training area.

Benne said with internal combustion engine vehicles, responders generally know what to expect when working car crashes — most cars place fuel tanks in the back and motors in the front. When responders see a car that’s been hit from the rear, he said they know to expect fuel leakage. But EVs are different.

While the National Fire Protection Association published an alternative vehicle fuel guide for first responders in 2018, Benne said it’s due for updates.

Monte Doan, a program developer and trainer at Francis Tuttle, said the field experiment was a fact-finding mission to see how long it took for the battery to catch fire. Ultimately, it took about three minutes.

“With one of these [electric vehicle batteries], the reaction is slow,” Doan said. “You start getting a little puff of smoke, as we saw. And lo and behold, in a little while, we got some small flames; it just gradually started to burn. Well, this answered a lot of questions for us.”

Doan said besides learning how much time responders have before an EV catches fire, the group is also learning the best methods for containing a fire while teaching at the technology center. He used a fire suppression system made specifically for EV fires at the demonstration, three of which he said are placed strategically around the lab.

Because EVs can reignite hours or even days after being seemingly extinguished, the suppression system is intended to get the fire under control so firefighters can flood the battery with large amounts of water for longer durations. Doan also has a fire suppression blanket that smothers the fire until firefighters arrive.

While EV battery fires burn much hotter than gas-powered vehicle fires — 4,900 degrees Fahrenheit compared to 1,500 degrees Fahrenheit — EVs are significantly less likely to catch fire than internal combustion engine vehicles. Research indicates that EVs have a .0012% of catching fire, while gas-powered vehicles have a .1% chance of catching fire.

Just getting to the lithium battery during a car wreck could present serious issues for first responders. Doan’s class will be practicing on a 2022 Ford Mustang Mach-E. While they don’t plan to set the car on fire, they want to use the car to orient responders on finding the battery’s tricky location. In the Mustang, the battery is under the hood, beneath a plastic panel he said is “not well identified.”

“And the only way to get the hood open is to get it from inside the vehicle,” Doan said. “And the only way to get inside the vehicle when it’s in a wreck, if you can’t get the door open — which you may not be able to do — is break the window. Then, you get to the manual door release. … And the hood release on the Mustang, you have to pull it two times. And… the cables [could be broken] in the wreck.”

Doan said electrocution is another worry for responding to EV wrecks. While studies found a low risk of electrocution from wrecked EVs, the high voltage level — 400 volts as compared to 12 volts in a gas-powered vehicle battery — is significantly more dangerous.

“All of the high voltage wiring is color-coded orange,” Doan said. “And one thing first responders do when they get to a vehicle, they’ve been trained to use their bolt cutters and cut the 12 volt battery cables. Well, they get into one of these [EVs], and they’re in a hurry, and they take their bolt cutters and cut an orange wire. Now they’re looking at high voltage.”

Capt. Benne said it’s important to keep in mind EVs aren’t necessarily riskier than gas-powered vehicles, but the technology is new, and there’s a lot to learn.

“I wouldn’t say that [EVs] are any more dangerous than an internal combustion motor with a 35-gallon tank of gasoline underneath it,” Benne said. “Anything can happen. And that could be just as dangerous, if not moreso.” 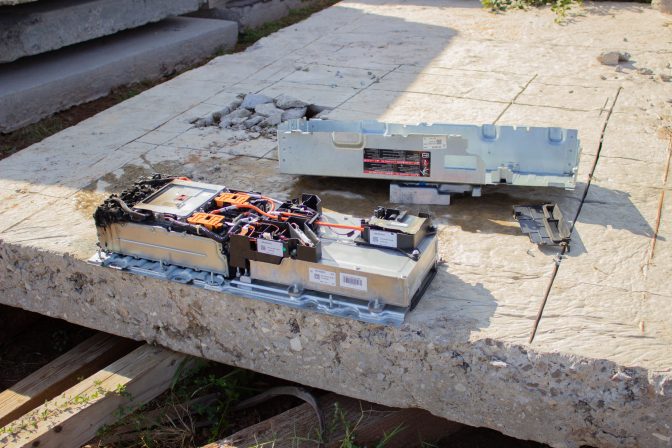 An electric vehicle engine sits on a slab of concrete after cooling down from being set on fire.

The first responder training course kicks off in November at Francis Tuttle with approximately three classes a month, ranging from a single day to a week long. While this class is currently only open to first responders, training for municipality technicians is in the works. To register, email Walter.Miller@FrancisTuttle.edu.