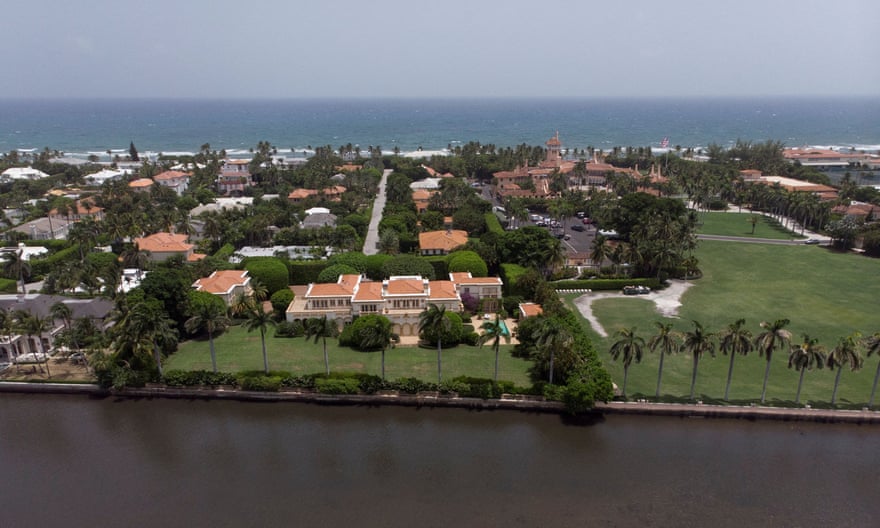 Departing his small, unshowy home state of Delaware, Joe Biden roared into the sky aboard Air Force One, borne aloft by jet fuel and a dramatic uplift in his political fortunes.

A thousand miles away, some unexpected guests had just arrived at the opulent Florida estate of the US president’s predecessor, Donald Trump, but not for its champagne, sumptuous buffet or two pound lobsters.

At about 9am on Monday, FBI agents – said to number between 30 and 40, some wearing suits, most in T-shirts, casual trousers, masks and gloves – began a search of Mar-a-Lago for government secrets that should not have left the White House.

And yet, such is the upside down nature of American politics in 2022, determining who won and who lost the week was less clear cut. For Biden, to be sure, it was a much needed boost after months of Washington gridlock, miserable poll ratings and speculation that he could face a challenger from his own Democratic party in the 2024 presidential election.

But Trump, perversely, also appeared to end the week stronger within his party than he began it. He had faced growing dissent over damaging revelations from the congressional committee investigating the January 6 insurrection. Yet his claim that his home had been “raided” by law enforcement prompted Republicans to unite behind him with renewed zeal.

The upshot was that Biden, 79, and 76-year-old Trump had each received a political blood transfusion when they needed it most. If recent events proved anything, it was that they are still the most likely contenders for the White House in 2024. America’s gerontocracy is not done yet.

For a president long called a carnival barker and reality TV star reveling in spectacle, the FBI search on Monday began innocuously enough, with neither Trump nor cameras present (his son, Eric, told Fox News that he had been the first to learn of it and informed his father).

The FBI agents had a search warrant as part of a justice department investigation into the discovery of classified White House records recovered from Mar-a-Lago earlier this year. They wore plain clothes and were given access by the Secret Service without drama.

The agents reportedly seized 11 sets of classified information, some of which was marked “top secret”, along with binders, handwritten notes and information about the “President of France”. Trump denied a Washington Post article that said the search was for possible classified materials related to nuclear weapons.

It ended at about 6.30pm on Monday and word broke on social media a few minutes later, quickly followed by confirmation from Trump himself. In a characteristically hyperbolic statement, he fumed that Mar-a-Lago was “currently under siege, raided, and occupied by a large group of FBI agents. Nothing like this has ever happened to a President of the United States before… They even broke into my safe!”

Trump claimed the search was politically motivated and attempted to draw a contrast with his old foe Hillary Clinton, but perhaps the most important sentence asserted: “It is prosecutorial misconduct, the weaponization of the Justice System, and an attack by Radical Left Democrats who desperately don’t want me to run for President in 2024.”

Like a herd of wildebeest, Republicans stampeded thunderously as one. “Weaponization”, “banana republic” and “dictatorship” were the go-to words of the week along with a blitz of fundraising emails. Some in the party of law and order, which had castigated Democrats over the “defund the police” slogan, were now calling for the FBI to be defunded.

Senator Rick Scott of Florida, the chairman of the National Republican Senatorial Committee, claimed that the government has gone the way of “the Gestapo”, the secret police in Nazi Germany. Congressman Paul Gosar of Arizona tweeted: “We must destroy the FBI. We must save America. I stand with Donald J Trump.”

Kevin McCarthy, the House minority leader, warned the US attorney general, Merrick Garland, to “preserve your documents and clear your calendar” because, if Republicans take control of the House in November’s midterm elections, they will hold oversight investigations into the justice department.

So far, so Maga. Perhaps more tellingly, even Republicans who had previously distanced themselves from Trump felt compelled to toe the line. Senate minority leader Mitch McConnell demanded a “thorough and immediate explanation” of what led to the search.

The former vice-president Mike Pence, who fell out with the former president over January 6, said “the appearance of continued partisanship by the justice department must be addressed”. Other potential contenders for the Republican nomination in 2024, including Florida’s governor, Ron DeSantis, joined the chorus.

Opinion polls confirmed that the FBI search had given Trump at least a modest boost among Republicans. A survey by Morning Consult found that 57% of Republican voters and Republican-leaning independents would vote for Trump if the 2024 primary were being held today, up from 53% in mid-July. DeSantis fell from 23% to 17% over the same period.

This followed a run of victories for Trump-backed candidates in congressional primary elections. In the spring and early summer, his record had been uneven with notable setbacks in states such as Georgia. But this month, his slate of election-deniers beat establishment-backed candidates in Arizona.

The businessman Tim Michels won the Republican primary for governor of Wisconsin with Trump’s backing. Most of the 10 Republican members of Congress who voted to impeach Trump have either retired or lost. Liz Cheney, the vice-chair of the January 6 committee, will be on the Wyoming ballot on Tuesday and is widely expected to lose her seat.

A the recent Conservative Political Action Conference (CPAC) in Dallas, Texas, 69% of attendees said they wanted Trump as the Republican nominee in 2024, well ahead of DeSantis on 24%. Jim McLaughlin, who conducted the straw poll, said: “He’s more popular than ever.”

Yet even as Trump tightens his grip on the Republican base, his new status as the first former US president to suffer the indignity of having his home searched by the FBI offers another reason why moderate and independent voters could slip through his fingers.

Larry Sabato, director of the Center for Politics at the University of Virginia, said: “There are two contrary effects. With Republicans, or at least the Republican base, this has caused them to rally around not the flag but Donald Trump. It has strengthened him within the party and discouraged people like DeSantis, whether he admits it or not, and the others aren’t even on the radar screen at this point.

“But the contrary effect for not just Democrats but also independents is it makes Trump less electable in 2024. People look at him and even if they like him they say his time has passed and he’s too controversial, I’ve heard this a million times and I don’t think it’s exceptional.”

Wendy Schiller, a political science professor at Brown University in Providence, Rhode Island, agrees that Republicans’ fast and furious defense of Trump should not necessarily be taken at face value as the midterms approach.

She said: “They’re squeezing all of this enthusiasm out of his base, promising them all sorts of things, just to make sure that they get out and vote on 8 November.”

Whatever their motivations, Republicans’ rush of incendiary and reckless rhetoric also came with a dark and dangerous side. Pro-Trump online chatrooms filled with calls for violence and phrases such as “lock and load” while “civil war” trended on Twitter.

On Thursday an armed man wearing body armor tried to breach a security screening area at an FBI field office in Ohio, then fled and was later killed after a standoff with law enforcement. The man is believed to have been in Washington in the days before the assault on the US Capitol and may have been there on the day it took place.

Trump’s legal perils – federal and state, civil and criminal – continue to mount. In a separate case, he sat for a deposition on Wednesday as the New York attorney general, Letitia James, wraps up a civil investigation into allegations that his company misled lenders and tax authorities about asset values.

Even as Trump invoked his fifth-amendment protection against self-incrimination more than 400 times, Biden was at the White House celebrating another victory. He signed bipartisan legislation to pour billions of dollars into care for military veterans exposed to toxic burn pits.

It was one of several victories for a president who just last month was being written off as a likely one-term president with an approval rating below 40% – worse even than Trump’s – because of inflation, a stalled agenda and a desire for generational change. The Axios website started a list of Democratic officials’ positions on whether they want Biden to run again in 2024, noting that two gave firm “no”s and 19 dodged the question.

But the narrative has shifted quickly in just a few weeks even as Biden battled a coronavirus infection and lingering cough. Congress, where Democrats have wafer-thin majorities, sent bipartisan bills addressing gun violence and boosting the nation’s high-tech manufacturing sector to his desk.

On Friday, the president secured what he called the “final piece” of his economic agenda with passage of a $740bn climate and prescription drug deal once thought dead. In addition, petrol prices dipped below $4 a gallon for the first time since March, inflation appears to be stabilising and the economy added 528,000 jobs in July, bringing the unemployment rate to 3.5%, the lowest in half a century.

And Biden successfully ordered the killing of al-Qaida leader Ayman al-Zawahri in a US drone strike in Afghanistan, the most significant blow to the terrorist network since the death of Osama Bin Laden. Democrats and the White House hope the run of victories will revive their their political fortunes in time for the midterms.

Bob Shrum, a veteran Democratic strategist, said: “When you combine what’s happened in the last month legislatively with the supreme court decision overturning Roe v Wade [the constitutional right to abortion], you may have a very different situation for Democrats going into the midterms and for Biden in the second half of his term and a possible re-election.”

Shrum, director of the Center for the Political Future at the University of Southern California Dornsife, does not buy the notion that Trump has been strengthened by his latest crisis. “He’s still the dominant force in the Republican party but he’s not as dominant as he was a year ago. He might be able to win a plurality nomination, but I actually think he’d be a very weak Republican nominee. He literally could get into a position where running would be a part time occupation and defending himself in court would be the full time occupation.”

The 2024 election is an age away. Most commentators agree that, despite all the unknowables facing both men, including those related to being older than any other American presidents in history, a Biden v Trump rematch remains the most likely scenario.

Michael Steele, a Trump critic and former chairman of the Republican National Committee, said: “Let’s settle this once and for all. Let’s stomp Trump’s ass into the ground one more time. He lost by 8m votes last time; he’ll lose by 16m next time. You want to play? Let’s play. Democrats, with all their navel gazing, whining and bellyaching about Joe Biden’s age and this and that, shut the hell up!”

Steele added: “The most likely outcome going into 2024 is that it will be a repeat of the 2020 election. All stakes remain the same, if not higher, and the American people are going to have to decide once and for all: are we down with autocracy or are we up with democracy?”