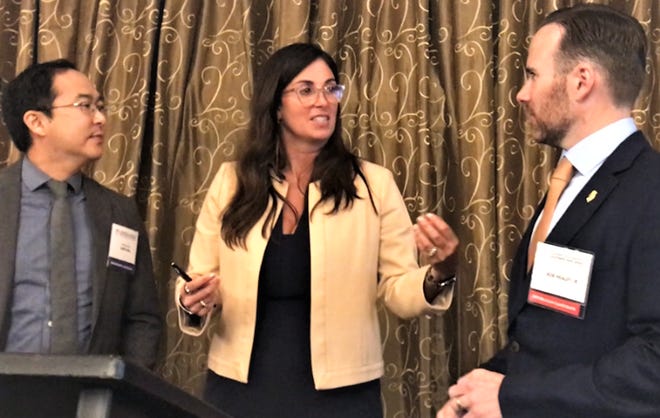 MOUNT LAUREL — No bad words were used in the making of a candidate forum here Tuesday between Democratic Congressman Andy Kim and Republican opponent Bob Healey, something an audience of business people and candidates appreciated.

Kim and Healey sparred for about an hour about how to represent the 3rd Congressional District, obviously striving to keep their disagreements civil. That kind of approach to politics is disturbingly absent in the Congress and generally in the country, they said.

The Chamber of Commerce Southern New Jersey organized the forum, which brought out about 100 members. President Christina M. Renna said she wanted to have the event before Labor Day, after which campaigning gets more intense.

More:Primary day in NJ: Who’s going to be on the November ballot? Find out here

The two major party candidates in the 3rd Congressional District campaign are Moorestown, Burlington County residents. Both men took time out to for kind words to each other, before answering a handful of prepared questions from the chamber.

“Now, my opponent talks about being bipartisan,” Healey said. “Well, I don’t see it. I don’t see it because he’s voted 100 percent of the time with Joe Biden.”

Kim, by contrast, never mentioned Biden. He told chamber members that he came to the U.S. House of Representatives accepting he did not have all the answers.

“I love this job,” Kim said. “And I’ve tried to do it with the utmost respect for our institutions of democracy and for this community that I would give my life for. I’ve served this country my entire career.”

Healey said the president has put the country in “deep, deep trouble.”

“We’ve seen that when you can’t get baby formula on a shelf,” Healey said. “We’ve seen it when you go to fill up your gas tank at a pump. If you’re a business owner, you’ve seen it by not being able to get your orders out the door because you don’t have the right product.

“All of that goes back to one person taking office — Joe Biden,” Healey said. “Before that, many of these problems didn’t exist.”

Healey mentioned problems people have finding baby formula, something he and his wife also have experienced shopping. He said the problem affects rich and poor, and he blamed it on over-regulation.

“When I think about this question, I think about an episode I had in Wegman’s,” Healey said. “I was actually going out to get baby formula this time. … And there’s a guy on his phone, his cellphone, in tears. And he’s saying, ‘Honey, I’m sorry. I know it’s the sixth place, but I still can’t find it.’ And we’re both looking at an empty baby formula shelf.”

Kim, in his second term, acknowledged problems exist with inflation and the supply chain. But the incumbent said things such as the COVID-19 pandemic and the war in Ukraine are at least partial contributors.

Recent federal legislation such as the Inflation Reduction Act will help and correct a prior refusal to spend money on green energy-related projects, Kim said.

Democrats pushed the bill through, with no Republican support. Despite the title, much of the law addresses climate change, energy, tax enforcement, and health care matters.

“What you see right here up on stage are two dads trying to figure out how to be able to move our country forward for our kids,” Kim said. “You know, the two of us, I’m sure I can speak for him, would do anything for our kids. That’s really what it comes down to. And I hope you see in what I talk about today as a sincere effort to be able to work together to be able to address this.”

Kim said he has kept a promise to hold a town meeting every month since taking office almost four years ago. One reason for that schedule is to try to reintroduce “some sense of civility, some sense of decency” in district politics by personally meeting residents of all party affiliations, he said.

Kim said his choice of congressional committee assignments, focused on small business and defense issues, was designed to serve the 3rd District. Joint Base McGuire-Dix-Lakehurst here, a mega-base created in 2009 by merging facilities, is the second largest employer in New Jersey, he noted.

Healey said the real impacts of the Inflation Reduction Act are largely are negative, adding $25 billion in gas taxes and supercharging the Internal Revenue Service. He forecast no significant impact on inflation.

“I don’t think I’m alone here in having sat across the table from an IRS agent,” Healey said. “And I’ve never met one who said, ‘You paid too much,’ at the end of that. I wouldn’t be putting small business through that kind of stuff.”

Healey is executive co-chairman of Viking Yacht Co. in New Gretna. The family owned company employs about 1,600 people, many of them immigrants. Biden Administration policies threaten their financial security, he said.

“They are one life event away from having to buy groceries on a credit card,” Healey said. “One life event away. A dog going into the hospital. A kid getting hurt. Buying a new car. That shouldn’t be the way it is for hard-working people in this country and in this state. But that’s where we’re at.”

The chamber did not open Tuesday’s forum to candidate Greg Sobocinski, running as an independent.

However, Sobocinski and several supporters staked out the Fellowship Road entrance to the Westin Mt. Laurel to hand out campaign literature. Government, “big tech,” and big business are in an “unholy” alliance today, one flyer states.

Sobocinski said he has been admitted to other candidate forums and debates. A campaign flyer handed out Tuesday described the chamber decision to exclude him as choosing “cancel culture” that harms its members.