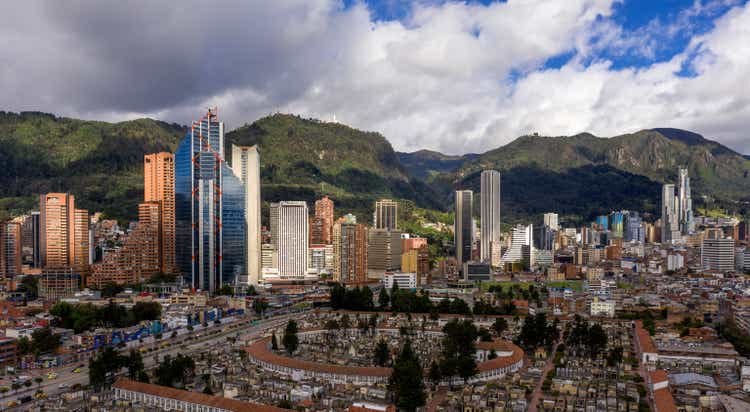 Grupo Aval (NYSE:AVAL) is a financial conglomerate that is primarily engaged in banking in Colombia, but also has a presence in Panama and controls a large pension manager and merchant bank that exposes it to the Colombian real economy through energy and infrastructure investments. Until early this year, Aval also had a large presence in Central America through BAC Credomatic. But, that business was spun-off from the parent company in March, leaving behind a mostly Colombian business, save for Multibank in Panama, which was purchased in 2020, and the 25% of BAC Credomatic that majority owned Aval subsidiary Banco de Bogota continues to own.

The conglomerate is a dominant force in the banking industry in Colombia, where its four banks collectively control about a quarter of the industry. That is roughly equal to Bancolombia (CIB). Aside from the fact that Bancolombia operates through a single brand in its home market and continues to retain somewhat broader exposure to Central America, Aval is also distinguished by having investment and merchant banking and asset management exposure versus Bancolombia’s purer exposure to commercial banking. Both are also quite cheap compared to historical multiples, with Bancolombia trading at about 4.7x next year’s earnings and Aval at 4.4x. While I prefer Aval due to its exposure to some higher return industries and modestly cheaper valuation, that exposure is not without some risk. Still, for the patient investor, Aval could work out extremely well over time.

Aval’s execution continues to be strong, with return on assets typically at 2% or above and return on equity hovering in the mid-teens. Figures for the second quarter came in at 2.1% and 16.6% respectively. The spin-off of BAC Credomatic not only amplified the company’s exposure to the Colombian market, but it also increased its exposure to the asset management industry (through Porvenir, which regularly posts return on equity figures above 20%) and to its investment and merchant bank Corficolombiana. While Corficolombiana provides traditional investment banking services to clients, the bulk of its income comes from merchant banking investments in the real economy that include utility and pipeline investments as well as a portfolio of road and airport concessions. These two high return businesses (asset management and merchant banking) have moved from about 28% to 40% of Aval’s portfolio.

The commercial banking business has been strong as well as the company has moved past the pandemic, although some signs of tougher conditions have started to emerge. Cost of risk in the second quarter fell to only 1.4% of loans from 2.0% last year. Still, that figure seems like it is likely to be the trough for the credit cycle as pre-pandemic figures were typically in the range of 2.3% to 2.4%. Net interest margins are also being squeezed this year as the central bank has raised its target rate to 9%, severely flattening the yield curve. Aval was typically earning a net interest margin of 6% pre-pandemic, but in the second quarter this fell to only 3.6% from 4.6% last year. While further tightening by the central bank is still likely, it seems reasonable to think that net interest margin will start moving higher again just as cost of risk should also normalize, as lower yielding loans and investments mature and are replaced by higher yielding ones.

Colombia’s economy is actually performing quite well at the moment, at least from a statistical perspective, although a lot of that is in the context of an economy continuing to regain its pre-pandemic form. Second quarter GDP growth was likely in the double digits, and expectations for the full year is for growth of close to 7%. The unemployment rate has similarly declined sharply, down to about 11%, close to pre-pandemic levels. The flip side of this growth has been high levels of inflation and commensurate tightening by the central bank.

The macroeconomic picture is playing out in the context of the election of leftist President Gustavo Petro. Dating back to 2002, Colombia’s three prior Presidents all came from the political right. Handicapping the future political agenda in the country will have importance to investors.

Tax reform will be first on the agenda, with the government needing to both reduce the deficit and trying to do so while funding social programs at the same time. One large goal of the proposed reform is to increase the amount of individual income taxes collected (particularly among high income earners) given that a large share of government revenue today comes via corporate and value added taxes. The proposal includes an increase in the capital gains rate plus the introduction of a wealth tax that becomes effective for those with a net worth of about $700,000 or more and new taxes on pensions. The oil and gas sector is also targeted, with a proposed elimination of a deduction on royalty payments and new taxes on coal. Petro has left no doubt as to his views on the energy industry, as he has pledged to stop issuing new permits for exploration and ban fracking.

What actually moves through the legislature is still not completely clear. The Colombian legislature is relatively fragmented and although Petro ostensibly has a majority, many members of the coalition are substantially more moderate. There are practical realities when it comes to the severity of the governments energy policies as well, as Colombia relies on the industry to fund the government and provide a huge portion of export income.

Ultimately, I believe that the political risks today are the biggest factor why Aval trades at a modest discount to Bancolombia, despite having a mix of businesses that should deserve a premium. While Corficolombiana does not directly own businesses that extract energy, they do have significant investments in adjacent industries that could be negatively affected should a sharp move from fossil fuels take place. Some proposals under discussion currently could also affect smaller pieces of Corficolombiana’s business such as a tax on financial derivatives and increased hotel taxes. And while Porvenir should emerge from the initial tax reform package in good shape, it remains to be seen whether the Petro government might introduce legislation designed to shift more pension assets to the government and away from the private sector.

For all the prognosticating on the evolution of the Colombian economy and the extent to which Petro will leave his mark on the country’s economy, the most important question for investors in Aval may well be the direction of currency markets.

The peso today exchanges at a ratio of about 4,500 to 1, compared to a peak of about 1,800 to 1 close to a decade ago and close to 3,800 to 1 prior to Petro’s election victory. Ignoring currency when investing in Latin America would be an enormous cognitive error. When currency moves with an investor, it can seem hard to make a mistake and if the currency does not cooperate, it can feel impossible to do anything right. While many observers attribute the ongoing “pink wave” as a reason that investing results in Latin America have been so poor over the last decade plus, currency is a more likely root cause. It is not only the direct currency translation which causes this, but the higher funding costs and sapped liquidity that can have large underlying effects on the broader economy.

The dollar is now sitting at 20-year highs against a basket of global currencies, having begun its current bull market in 2008. Normally the commodity surge seen this year would be dollar negative, but steep interest rate increases by the Federal Reserve and geopolitical turmoil has sent the dollar to new highs. Exchange rates are notoriously difficult to forecast, but given the historical highs that the dollar is reaching and the length of the current bull cycle, the end of the current tightening cycle could well coincide with the end of the current tightening cycle.

There has always been a lot to like in Aval’s execution and dominant positions where it operates. That remains true today. Investors need to be mindful of currency fluctuations as well as political moves in relation to the energy industry and pension management. But, the upside for assuming those risks is a set of dominant franchises trading for close to 4x earnings and less than book value.

Taking the long view, it has been quite rare for either Aval or Bancolombia to trade for less than book value (which they continue to even adjusting for post-quarter currency movements). The only time either traded lower was in 2002, not too far removed from the 1998 financial crisis and prior to the coming great commodity boom, when Bancolombia briefly traded for about 60% of book.

Similarly, viewing pre-pandemic multiples of earnings show a tendency of a multiple of between 5x an 15x, with a couple of outliers below 5x. Again, the low here was Bancolombia in 2002 when it touched 3x earnings.

That does not mean that today’s valuations present no downside at all, but it does mean Aval has rarely been cheaper and valuation risks skew strongly to the upside over the long term. Be aware of the risks, but dollar cost averaging into Aval (or even Bancolombia for those investors wishing modestly less risk) over the next year while looking for a searching dollar peak seems to be an eminently reasonable strategy.