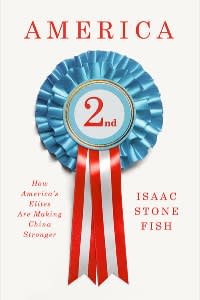 What will happen to Twitter when it is owned by Elon Musk? The world’s richest man is known for his libertarian attitudes to free speech. But Musk and his company, Tesla, also have significant investments in China. Will even the famously outspoken entrepreneur begin to pull his punches when it comes to the People’s Republic of China?

According to Isaac Stone Fish’s America Second (Scribe, £16.99/Knopf, $29), Musk would just be the most recent example of a powerful American who allows money to cloud his judgment of China. Despite its inflammatory title, Stone Fish’s book is a carefully researched, self-aware and often funny account of how China has built its influence in the US.

Central to these influence operations, according to Stone Fish, are a class of “diplomat consultants” — retired statesmen, who have used their contacts in China to serve as intermediaries between American business and the Chinese Communist party. Stone Fish details the role played by former US presidents and high officials, such as George W Bush, Jimmy Carter, Madeleine Albright, Brent Scowcroft, William Cohen and Gary Locke.

But the central figure in his sights is the most revered “wise man” of them all — Henry Kissinger. In his 1979 memoirs Kissinger had raised the possibility that a more powerful China might one day turn against the US. Three years later, the former Secretary of State set up Kissinger Associates, a consultancy, which has opened doors in Beijing and provided advice for a roll call of corporate America. Stone Fish argues that it is no coincidence that Kissinger has also consistently argued for rapprochement between Washington and Beijing, and is still treated with great reverence by the Chinese leadership.

In Kissinger’s defence, the need for great-power accommodation was a consistent theme of his career as a diplomat. He was also a champion of détente between the US and the Soviet Union. So it is entirely possible that principle and profit were happily combined, in his role as an adviser on China. Nonetheless, to use the weaselly phrase favoured in Washington, there is clearly an “appearance of a conflict of interest”.

As Stone Fish points out, universities and even individual academics are also vulnerable to pressure from China. Those who write about modern China are treading through a political minefield that complicates Professor Kerry Brown’s effort to write a neutral, balanced study of China’s leader, Xi Jinping in Xi: A Study in Power (Icon, £10.99).

Unlike other world leaders such as Donald Trump or Vladimir Putin, the story of Xi’s early years is little known outside China. Brown’s book provides a very readable account of Xi’s childhood and rise through the ranks of the Communist party. It is an interesting story, featuring the fall from grace of Xi’s father and a long period of exile in the countryside, during the Cultural Revolution, before Xi completed his own long march through the ranks of the Communist party to the pinnacle of power in Beijing.

Brown’s determination to understand China on its own terms becomes harder to maintain, when he addresses the fraught political controversies of today. The suppression of political freedom in Hong Kong is presented in neutral language. The internment of more than 1mn Uyghurs is described as “problematic” and then “profoundly concerning” and “lamentable”. But Xi himself is never portrayed as an authoritarian monster. Instead Brown’s most controversial judgment is to argue that Xi remains the servant of the Communist party and the “skillful conductor” of an orchestra. That judgment seems to me to downplay the extent to which Xi has moved China back towards a more personalised and centralised style of government, with term limits on the Chinese presidency abolished and Xi Jinping thought written into the Communist party constitution.

The rise in tensions between China and the US — as well as Russia’s invasion of Ukraine — massively complicates the world’s ability to manage complex, global problems. Ian Bremmer, the president of the Eurasia Group, has long been one of the most astute commentators on the crisis in global governance. He coined the phrase G-Zero to describe the collapse of international co-operation in a world that is meant to be guided by the meetings of powerful countries, in the G20 or G7.

In his latest book, The Power of Crisis (Simon and Schuster, £20/$28.99), Bremmer returns to the subject of global governance, focusing on three urgent threats: climate change, technology and global health emergencies. Perhaps the most original section of his book is a compelling analysis of the race to dominate quantum computing — and how that could become yet another source of conflict between China and the US.

In a rapidly written addendum, Bremmer also considers how Russia’s invasion of Ukraine will complicate efforts to revive global governance. As he put it, with a degree of understatement — “I’m not going to sugarcoat it: this complicated things.” But, in line with the underlying thesis of his book — The Power of Crisis — Bremmer concludes optimistically that international crises can also create new impetus and opportunities for international co-operation. It would be nice to believe him.