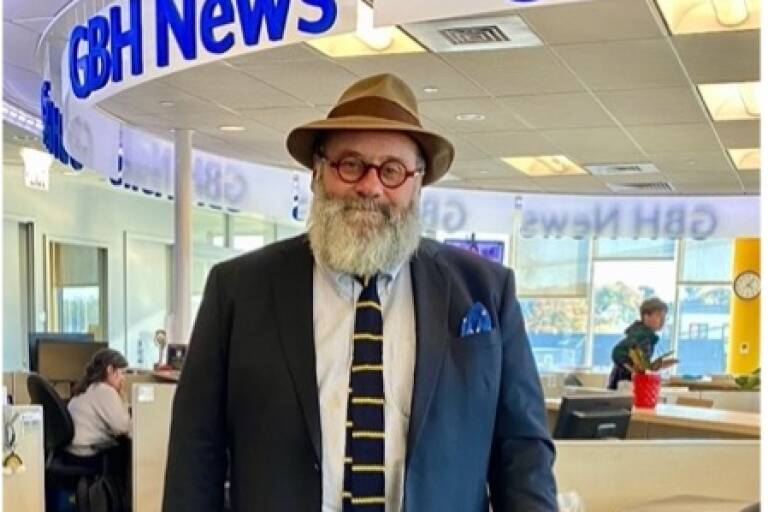 Boston, MA (November 14, 2022) — Following 50 years in the news industry, GBH News Politics Editor Peter Kadzis will retire from full-time work in January 2023. He will continue to work with GBH News as a political contributor.

“For nearly a decade, Peter has brought our audiences into the heart of Massachusetts politics with his sage analysis and charming wit,” said Pam Johnston, General Manager for News at GBH. “I’m delighted that we will still benefit from Peter’s political insights as a contributor. I want to applaud Peter on a legendary career in Boston media.”

Kadzis began his career at the Public Housing News and worked for the Boston Globe, Providence Journal, New York Daily News and Boston Business Journal before joining the now-defunct Boston Phoenix, where he worked for 25 years. During his tenure at the Phoenix, he won two New England Press Association awards for editorial writing while also offering political commentary on Fox 25 for 11 years.

Peter joined GBH News in 2013 as a special contributor and has led the organization’s political coverage as an editor since 2014. In 2021 he helped launch the new GBH TV show “Talking Politics,” hosted by Adam Reilly.

“That I’ve been able to cap off a 50-year career at GBH News gives me a sense of wonder,” said Kadzis. “I’m immensely proud of the work we’ve done as an organization, especially the political coverage with my colleagues Adam Reilly, Saraya Wintersmith and Katie Lannan. I know our newsroom’s commitment to the public good will only continue to grow and intensify. I’m looking forward to having a small role in its ongoing evolution.”

About GBH News
GBH News is among the fastest-growing local news providers in Greater Boston and draws on the talent of a multiplatform newsroom that includes GBH 89.7, Boston’s Local NPR; television; and digital reporting. The GBH newsroom continues to invest in substantive local coverage and has established dedicated desks for higher education, politics, innovation and investigations as well as unique partnerships to expand on that commitment, including with WNYC’s The Takeaway, The World from PRX and The GroundTruth Project. GBH News partners with CAI, the Cape and Islands NPR station; and New England Public Media in western Massachusetts to connect the Commonwealth with trusted journalism. GBH News maintains bureaus at the Massachusetts State House; Dorchester, Boston’s largest neighborhood; and Worcester. The Forum Network, part of GBH News, collects thousands of video and audio lectures from the world’s foremost scholars, authors, artists, scientists, policymakers and community leaders and makes them available online to the public for free.