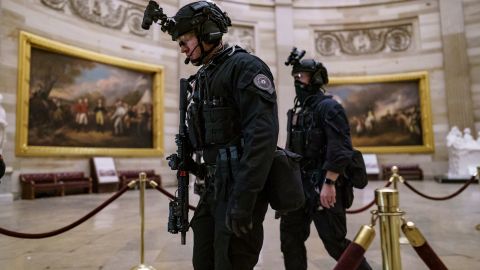 The House Select Committee investigating the January 6, 2021, attack on the US Capitol is wrapping up its review of more than a million pages of Secret Service documents and plans to bring in top agents and officials from the agency to testify in the coming weeks, multiple sources tell CNN.

The widening list, which sources say includes about a half dozen witnesses, indicates the committee is still pursuing answers from the agency on a number of fronts, including what it knew about threats ahead of the attack, what former President Donald Trump knew about armed protestors heading to the Capitol, and how it responded to testimony about Trump’s altercation with his security detail that day.

In its last hearing the Committee presented some new internal Secret Service communications, which indicated agents were aware of potential violence on Jan. 6, including threats against then Vice President Mike Pence. The trove of Secret Service documents was subpoenaed by the committee after it became public the agency had deleted text messages from the day of the attack.

The committee has previously said it intends to call back two key witnesses, former Secret Service Assistant Director Tony Ornato, who left the agency to briefly serve as Trump’s deputy chief of staff, and Trump’s lead Secret Service agent on the day of the attack, Robert Engel. Both men have already met with the committee.

Among the other witnesses under consideration, sources say, are:

Until recently, Ornato’s lawyer, Kate Driscoll, told CNN the committee had not requested additional testimony from her client since his most recent appearance in March. On Thursday however, Driscoll said, “Mr. Ornato continues to cooperate with the committee in its investigation.”

Giebels, reached by phone, told CNN he has not been contacted by the committee yet.

A spokesman for Secret Service declined to comment, including on which of its personnel may be called to testify before the committee

The committee still wants more information about what the Secret Service knew about threats to Pence and lawmakers ahead of the attack, sources say.

In its October 13 hearing, Democratic Rep. Adam Schiff said that the Secret Service received alerts of online threats made against Pence ahead of the Capitol insurrection, including that Pence would be “‘a dead man walking if he doesn’t do the right thing.’”

CNN has learned that Pence and his team were never briefed on those threats, according to a source familiar, and only learned of them when they were made public during this month’s hearing. A spokesman for the Secret Service also declined to comment on whether Pence was briefed on threats.

On January 6, one Secret Service agent texted at 12:36 p.m., according to a message revealed during the committee’s recent hearing, “With so many weapons found so far; you wonder how many are unknown. Could be sporty after dark.”

Another agent responded minutes later, “No doubt. The people at the Ellipse said they are moving to the Capitol after the POTUS speech.”

There are also questions regarding what Trump knew about individuals armed in the crowd ahead of his speech on the morning of January 6. Through radio traffic, internal agency communications and witness testimony, the committee has revealed that Secret Service agents knew individuals in the crowd of Trump’s speech were armed. One witness, former White House staffer Cassidy Hutchinson, testified publicly on June 28 that Trump was frustrated that the armed individuals were not being let in through the metal detectors to attend his speech.

Hutchinson testified she heard Trump say something to the effect of “I don’t effing care that they have weapons. They’re not here to hurt me. Take the effing mags away. Let my people in.”

Another incident the committee is investigating is Trump’s behavior in his presidential SUV on the day of the attack, when he was told he could not go to the Capitol after his speech.

Hutchinson has testified that Ornato told her that Trump got so angry that he lunged at a member of his detail and said something to the effect of “I’m the effing president. Take me up to the Capitol now.”

Neither Ornato and Engel have denied Hutchinson’s testimony on the record. A Secret Service official, who spoke on condition of anonymity, previously told CNN that Ornato denies telling Hutchinson that the former President grabbed the steering wheel of his presidential SUV or an agent on his detail.

Ornato has been interviewed by the panel on at least two occasions – in January and March –as part of its investigation. Ornato’s attorney told CNN that he remains willing to cooperate with the investigation but, to date, has not been asked to testify again since his appearance in March.

The driver of Trump’s presidential SUV, a key eyewitness to the incident, has never been called in by the committee, sources tell CNN. Sources tell CNN the panel learned about the driver through Hutchinson’s testimony.

In its July 21 hearing, Hutchinson’s testimony was in part corroborated by Retired Sergeant Mark Robinson of the DC Police Department, who was assigned to Trump’s motorcade that day and sat in the lead vehicle with the Secret Service agent responsible for the motorcade, also called the Transportation Section agent.

Robinson testified to the committee that the Transportation Section agent told him that “the president was upset and was adamant about going to the Capitol and there was a heated discussion about that.”

Also in that hearing, the committee introduced an anonymous former White House employee with national security responsibilities who testified that Ornato also told this witness about Trump’s irate behavior. The committee shared in its October 13 hearing that this anonymous individual told the committee that Trump’s angry outburst in the SUV was so widely known that it became “water cooler talk.”

In addition, the panel made a specific point to raise concerns about potential witness tampering.

Democratic Rep. Pete Aguilar of California said during the committee’s October 13 hearing, “the committee is reviewing testimony regarding potential obstruction on this issue, including testimony about advice given not to tell the committee about this specific topic. We will address this matter in our report.”

Committee member Rep. Adam Kinzinger told CNN in September that members of the panel believe Ornato was personally involved in efforts to discredit Hutchinson’s testimony while he was still at the agency, and said unnamed Secret Service officials and others simply adopted his side of the story.

“I just think it’s so important to keep in mind that, through quote, anonymous sources, which we believe to be actually Tony Ornato himself, he pushed back against Cassidy Hutchinson’s testimony and said, it’s just not true and Tony will testify under oath,” he told CNN. “And then of course, has not come in to testify under oath.”