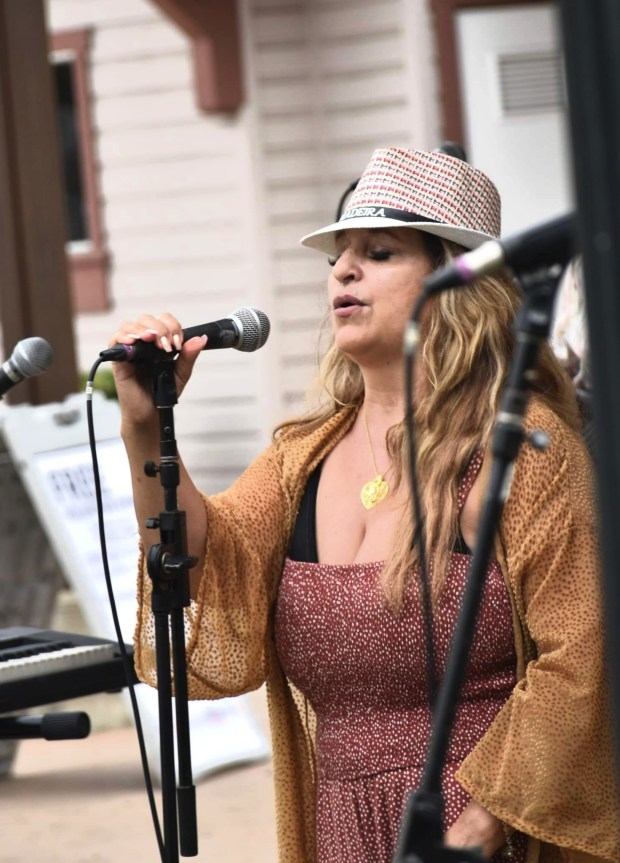 For her still-in-the-works album, Ramana Vieira, a Vacaville resident and a convincing practitioner of fado, a type of melancholy Portuguese folk music, said the theme of the recording centers on her recent travels to Hawaii, Portugal and Madeira.

More specifically, she added during a telephone interview, the 12-tune album — to be released in early 2023 — concerns the beauty of the jacaranda, a tree native to Brazil that produces clusters of fragrant purple blooms that she saw on the Pacific Ocean chain of islands.

“The beauty of it has just haunted me,” said Vieira, who also has booked a show, dubbed “A Journey to the World of Portuguese Fado and Beyond,” at 7 p.m. Nov. 5 at Journey Downtown in Vacaville. Her backing ensemble is Jeff Furtado, guitar; David Parker, bass; and Earl Jackson, drums.

But like any musical artist working in any genre, Vieira explores the contours, past and present, memories and more contemporaneous things, of her life in the new recording, with songs in both Portuguese and English, covers of fado classics and original compositions.

She “dipped into my Catholic upbringing on “Mother Mary,” and song, said Vieira, that casts an eye on “the divine female.”

Noting of of the album’s songs will be performed during the Nov. 5 show, Vieira said the new recording also will feature a tribute to a contemporary fado artist, Misia, covering “Paixones Diagonais” (Diagonal Passions and pronounced “Pie-shones Deog-go-nigh-ish”).

On a recent trip to Portugal, Vieira visited the home — turned into a museum — that once belonged to Amalia Rodrigues, perhaps the most famous fado artist in the world.

“I got to see her wardrobe, her awards, her living room — she clearly entertained people — a beautiful guitarra (guitar),” she recalled. “She collected Japanese antiques. And her parrot is still alive. It’s in the kitchen, in a cage in the kitchen.”

She also saw Rodrigues’ memoirs, her books, her performance costumes.

“Everything was so extravagant,” said Vieira, adding, “She was not very tall.”

In her live shows, such as one earlier this year in the Sebastopol Center for the Arts in Sebastopol, she sang a Rodrigues tune, so the visit to her idol’s home was part of a personal journey and tribute to an idol.

“It was like going to Elvis’ Graceland,” she said. “It was such a profound experience being in the home,” describing it as “a three-story San Francisco Victorian.”

During the most recent trip to Portugal, Vieira escorted her 87-year-old father, Abel, to his native Madeira, and Portuguese island in the eastern Atlantic and off the coast of Morocco.

“It was a beautiful reunion,” she said. “We were able to go to the village he was born in (Boa Ventura) and the house he was raised in.”

One night on the island, she ate dinner at a restaurant where, besides food, fado is on the menu.”

“The cook would come out and sing,” said Vieira, who, in recent years, has performed in Macau, New York City, and Hawaii. “The wait staff, a server, would break out in song. I was invited up to sing,” and she sang a song by Rodrigues.

“I was terrified,” she recalled. “I was exhilarated, with a hint of ‘Oh, crap!’ I got a compliment from the restaurant owner. I was asked to play with the authentic people. You hope you authentically match the intensity and caliber of the musicians they been born into.”

Vieira, whose voice is freighted with heft and power, believed that she “pulled it off. I remember feeling relieved after I was done. It was my vision of fado. There was big, roaring applause.”

During a previous interview with The Reporter, Vieira called fado, its name roughly translating as fate or destiny, “a window into the soul” of Portuguese people, their roots music, likening it to American blues, or what tango is to Argentina, flamenco to Spain.

The appeal of fado — pronounced “FAH-doh” — with mysterious origins traced to early 19th-century Portugal and enjoying a growing fan base in the United States (even Madonna sang fado during her “Madame X” tour more than two years ago), is in its melodies, the hummable part of each song, she said.

The music is alluring, passionate, and plaintive, but also poetic and dramatic. They are, more than anything else, love songs of tragedy and longing, or “saudade” in Portuguese, said Vieira, a native of San Leandro and an alumnus of the American Conservatory Theater program in San Francisco.

References to fado in Portugal surfaced as early as the 1820s, the music sung by women lamenting their lost men at sea, or of a hardscrabble rural or city life, but its roots may have Moorish influences, too.

While the genre has its traditions, Vieira, in the previous interview, said she considered her fado stylings “contemporary fado,” where the old world meets the new, very much like the approach taken by other well-known active fado vocalists. They include Ana Moura and Mariza, all of them indebted to Rodrigues, sometimes called “The Queen of Fado,” who died in Lisbon in 1999 at age 79. While some men also sing fado, it is best known today because of its female artists.

Vieira, who also plays piano during her live performances, has released four albums: “Sem Ti” (Without You), “Despi A Alma” (roughly translated as Bare Soul), “Lagrimas De Rainha (Tears of the Queen), and “Fado Da Vida” (Destiny of Life). They are evidence that Vieira not only pays homage to Rodrigues but also signals that she can compose original fado music. Notably, her original composition, “Unido Para Amar,” was played at the 2006 Olympics opening ceremony.

Pop, rock and jazz can be heard seeping into her sound, some of it available on YouTube, and she counts among her influences U2, the Irish rock superstars, and Kate Bush, an English singer-songwriter. Ultimately, Vieira’s sound admittedly is something of a blend of U2, Bush and Rodrigues.

That fado is “theatrical and highly expressive” was an emotional and technical link to her early days “as a theatrical person,” she said in the previous interview.

Vieira has performed in musicals at California State University Hayward and at Ohlone Community College in Fremont. She is also a trained dancer.

Following a Bay Area performance some years ago, she was approached by a record producer who worked with reggae star Bob Marley. She eventually received an offer from a San Francisco record label.

Like blues, fado is a feeling, a sentiment, and more than a set of notes. Its power stems from the human spirit, said Vieira.

IF YOU GORamana Vieira and EnsembleA Journey to the World of Portuguese Fado and BeyondWhen: 7 p.m. Nov. 5 (doors open at 6)Where: Journey Downtown, 308 Main St., VacavilleTickets: $23 seniors, military, students; $28 generalevents.journeydowntownvenue.com