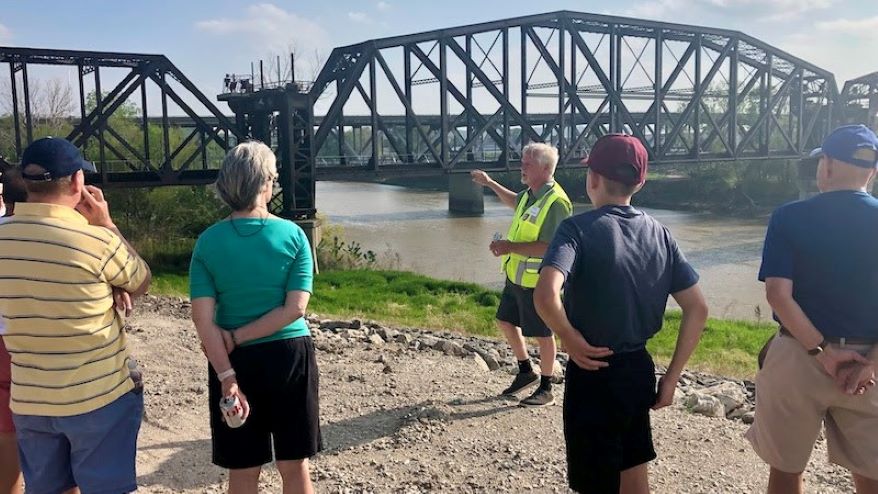 
Above image credit: Mike Zeller leads a tour of the old Rock Island Bridge where he plans to create an entertainment district over the Kaw River. (Kevin Collison | CityScene)

Michael Zeller’s quest to convert an old West Bottoms railroad bridge into an entertainment district over the Kaw River is picking up steam, with construction plans now in place and backing from key local philanthropic foundations.

Zeller has come a long way since he was canoeing 10 years ago with his young sons on the Kaw (Kansas) River. He thought the old Rock Island Railroad bridge would be a good place for what he jokingly called a “Chicken on the Bridge” restaurant.

While he laughed at first, the idea stuck in his mind and he eventually formed an entity, Flying Truss LLC, to pursue it.

Despite initial skepticism about his concept to transform the steel girder bridge built in 1905 into a combination public bicycle and walking path accompanied by private restaurants and entertainment venues, he persisted.

His idea attracted local press attention, including a front page story in The Kansas City Star, but when the Wall Street Journal reported about his plan to convert an old railroad bridge into a destination entertainment district last November, his marketing took off.

“I committed early and I’ve had multiple conversations in and out of town because of the Wall Street Journal article,” Brain said. “People in California, Chicago, Ohio took note of this and think it’s an interesting idea.”

Zeller has continued to tirelessly advocate and market his concept, hosting what he called Kaw Socials beginning last summer to attract people to the bridge and the neglected river it spans.

“We’ve been helping people glimpse a future Kansas River for recreation and economic development,” he said.

“The reason behind the Kaw Social is showing off the bridge and getting people over the river so they can imagine listening to live music and dancing with a glass of wine.”

Zeller said the Unified Government of Wyandotte County has caught “river fever,” pledging $2 million toward his bridge plan, and investing in a new park and recreational trails in an odd corner of the West Bottoms behind the Hy-Vee Arena that lies in Kansas.

The park will include floating docks to allow people to launch their own canoes and kayaks or rent them from a potential private operator. As opposed to the Missouri River, the Kaw is a much more gentle waterway that allows recreational boating.

In addition to Zeller, Mike Laddin and developer John McGurk are involved with Flying Truss and the Rock Island Bridge project.

Flying Truss has moved forward with signing contracts with two construction firms and its architect, Gould Evans, has prepared drawings for the plan. Because of inflation, its estimated cost has grown from about $7 million to $10.5 million.

On the private side, the Rock Island Bridge proposal has the support of the Sunderland Foundation, Helzberg Foundation and Dickinson Foundation.

The Greater Kansas City Community Foundation has established a Rock Island Bridge Project Fund to accept charitable contributions that will go toward construction of dedicated public space on the bridge.

Flying Truss also is selling shares to investors. In addition to Brain, another prominent investor is Frank Uryasz, president of the Uryasz Family Foundation and manager of A&F Real Estate.

Zeller estimated he’s raised more than half the funds necessary to develop the plan, but declined to provide details.

About 65% of the bridge would be used for public purposes. The remaining 35% will be developed privately and would pay taxes to the Unified Government.

L.G. Barcus & Sons construction will handle the major modifications to the bridge, including removing the old tracks, building a 704-foot concrete deck, adding cantilevered extensions over the river and installing utilities.

Centric Construction will build the structures to accommodate the retail businesses planned for the bridge and finishing details.

On the entertainment side, Flying Truss has deals with Slaps Barbecue and Buffalo State Pizza to be food vendors. The liquor operator will be Nick Carroll, who operates the Replay Lounge, an entertainment venue in Lawrence.

The initial plan calls for the bridge and its private entertainment and food and beverage offerings to be open from mid-March through the end of December. The public bike and pedestrian crossing will be open year-round.

In the meantime, development interest in the West Bottoms has heated up since Zeller’s “Chicken on the Bridge” voyage a decade ago.

The 232-unit Yards apartment project opened nearby last year and its developer is planning a second phase by the Kaw River park being built by Wyandotte County. The Hy-Vee Arena also attracts big crowds of soccer families on the weekends to its amateur sports complex.

On the north side, a Cleveland developer has renovated several old warehouses into a 265-unit apartment project called West Bottoms Flats. And recently, a New York developer announced plans for a 1,200-unit redevelopment plan in the West Bottoms.

With all those potential new residents in the neighborhood, plus its unique status as a bridge where people can come and enjoy the river while eating a meal, having a drink or just ride their bicycles or walk across it for free, Brain said its a winning formula.

“I think it has the hallmarks of successful entertainment proposals and I’ve had experience with that,” he said.

Flatland contributor Kevin Collison is the founder of CityScene KC, an online source for downtown news and issues.

Thank you for subscribing!

Check your inbox, you should see something from us.

Power Kansas City journalists to tell stories you love, about the community you love. Donate to Flatland. 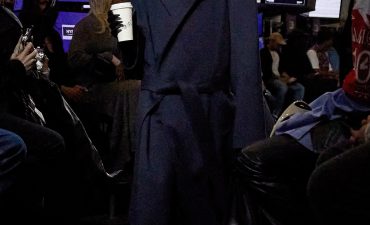