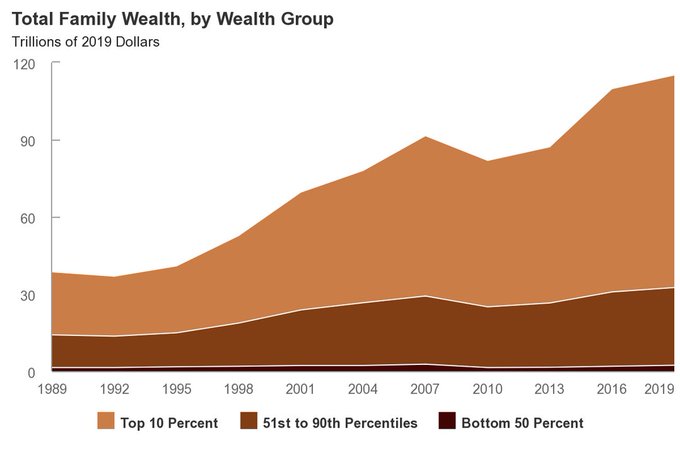 The most reliable economic fact for nearly 50 years is that American wealth and income inequality continues to explode. Alongside that we’ve seen rampant corruption and the toxic debasement of our politics.

GET THE MORNING HEADLINES DELIVERED TO YOUR INBOX

As a news reporter, you see these same struggles whether you’re covering poverty in city or country areas.

You also meet many people who are entirely disillusioned about American government.

They do not see it as our collective self-government, with elected public servants representing their interests.

They see it as a club of self-interested, corrupt politicians, ignoring them and their problems and needs, and instead running to the bank with their rich special interest friends.

They have a point. In America, on a very real, practical level, money is freedom.

Research from the Center on Budget and Policy Priorities shows that while income gains were shared in the few decades after World War II, they have not been since.

The nonpartisan Congressional Budget Office released a new report Tuesday that shows the poorest half of America — 150 million people — hold only 2% of the country’s total wealth.

This means that the top 1% of Americans hold 17x the wealth of the bottom 150 million Americans.

More than this, over the past 30 years, the bottom half of Americans actually saw their share of the nation’s wealth drop from 4% to the 2%. On average, families in the bottom
25% of the wealth distribution had more debt than assets, with an average wealth of −$11,000.

In the report, this line really sticks out: “The median wealth of every cohort born since 1950 was less than the preceding cohort’s median wealth when that cohort was the same age.”

This means that in America for decades now we’ve been handing down a lower standard of living and more economic hardship to each successive generation.

That is the opposite of fulfilling our obligation as a society.

If we are not collectively building a better future for our families and communities — and are in fact making things harder and worse for them — we are failing our duty and obligations as citizens and as a community in whole.

How can this happen? Human greed, ambition for power and influence, arrogance, and a lack of ethical morality.

Many politicians are motivated primarily by self-preservation. A corrupt campaign finance system and radicalized political discourse encourages them to cynically betray their honor, honesty, and duty to the people in sacrifice to power.

In addition, gerrymandering lifts up zealots, who are genuine in their beliefs but hold extremist, fringe views often immune to facts, unhinged from reality, and totally out of step with the vast majority of people.

Gerrymandering pushes these fringe candidates to the top in primaries and makes them a lock for general elections.

This purchases influence, and they get billions of dollars of public money, tax breaks, bailouts, and sweetheart lawmaking in return.

The ideal of a constitutional democratic republic is for elected officials to represent the people, but time and again we see the people being hosed for the benefit of private profiteering.

And the people feel it. They feel themselves continually shut-out of governance and ignored, and they become disaffected as they also feel their hardships and pain only increase.

This leads them to reach toward ever-more radical ideas and politicians to try to affect change, any change, that might actually benefit them for once.

Whole masses of people become susceptible to demagogues and charlatans, and this intensifies the toxicity of our politics.

The first two dominoes to knock down, as ever, are gerrymandering and corrupt campaign finance. Both need to be stopped.

Just doing that would establish some semblance of actual representative democracy and, over time, ease many other tensions.

People would start getting a lot more of what they actually want and need.

But we also need to be honest with ourselves and recognize that if a lot of our politicians are dishonest, selfish, corrupt, greedy, and manipulative, a big part of the problem is that, as a society, too many people are far too accepting of dishonesty, selfishness, corruption, greed, and manipulation.

And too many are far too susceptible to being divided by nonsense against our own collectively shared interests.

We have the tools of our democracy still available to us to demand and elect public officials committed first to serving the people — all the people — thoughtfully and justly, so we are all able to share in the vast abundance of our collective productivity.

But unless we find the popular will to demand it, and to eject the zealots and grifters, all of this will just continue to get worse.

This commentary was originally published by Ohio Capital Journal, a sister publication of the Arizona Mirror and a member of the States Newsroom network of local news organizations.