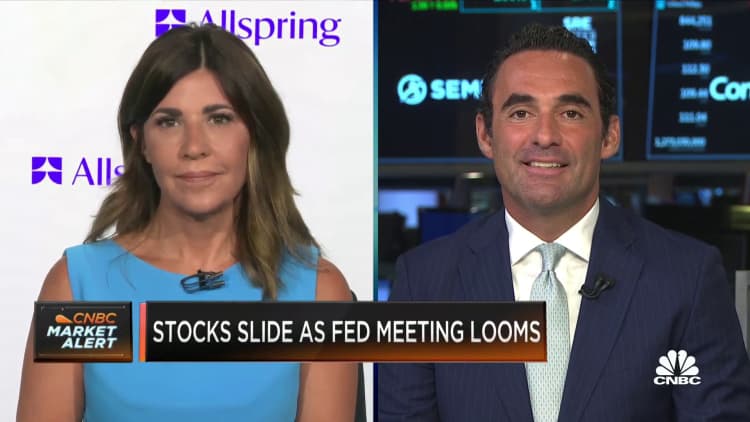 The Dow rose marginally higher Monday in a volatile trading session ahead of the Federal Reserve’s two-day policy meeting that kicks off Tuesday, where the central bank is widely expected to hike rates by another 75 basis points.

The Dow Jones Industrial Average last traded 45 points higher, or 0.13%. The 30-stock index wavered on Monday between a loss of 263 points at its lows and a high of nearly 130 points. The S&P 500 and Nasdaq Composite traded marginally higher.

Yields pushed higher ahead of the Fed’s likely decision to raise its benchmark rate by another 75 basis points to snuff out inflation later this week, with the 10-year Treasury yield topping 3.51% and hitting its highest level in 11 years.

After some brief hope over the summer that the Fed may be done with its aggressive tightening campaign, investors have been dumping stocks again on fears the central bank will go too far and tip the economy into a recession.

Investors are focused on the Fed’s policy meeting slated to begin Tuesday, where the central bank is expected to raise interest rates by another 75 basis points. Investors are also watching for guidance about corporate earnings before the next reporting season begins in October.

“It’s a very quiet session thus far,” wrote Adam Crisafulli of Vital Knowledge in a note to clients. “Stocks have climbed off their lows from earlier in the morning, but sentiment is still very gloomy. The consensus playbook for the week seems to be anticipating a brief rally around the FOMC, which most people plan to use as an opportunity to book profits in preparation for further downside (a return to the June lows is thought by many to be inevitable).”

Six of the 11 major S&P 500 sectors rose or traded flat, led to the upside by consumer discretionary, industrials and materials. Financials also moved higher as some investors bet that higher rates could benefit their bottom lines. Health care was the laggard, falling 1.5%.

Stocks slid last week as investors reacted to a hotter-than-expected inflation report and a dismal warning from FedEx about a “significantly worsened” global economy. The major averages posted their fourth weekly loss in five weeks and hovered near two-month lows.

Beyond the Fed meeting, there are just a few economic data releases on deck this week, including August housing starts on Tuesday and initial jobless claims on Thursday.