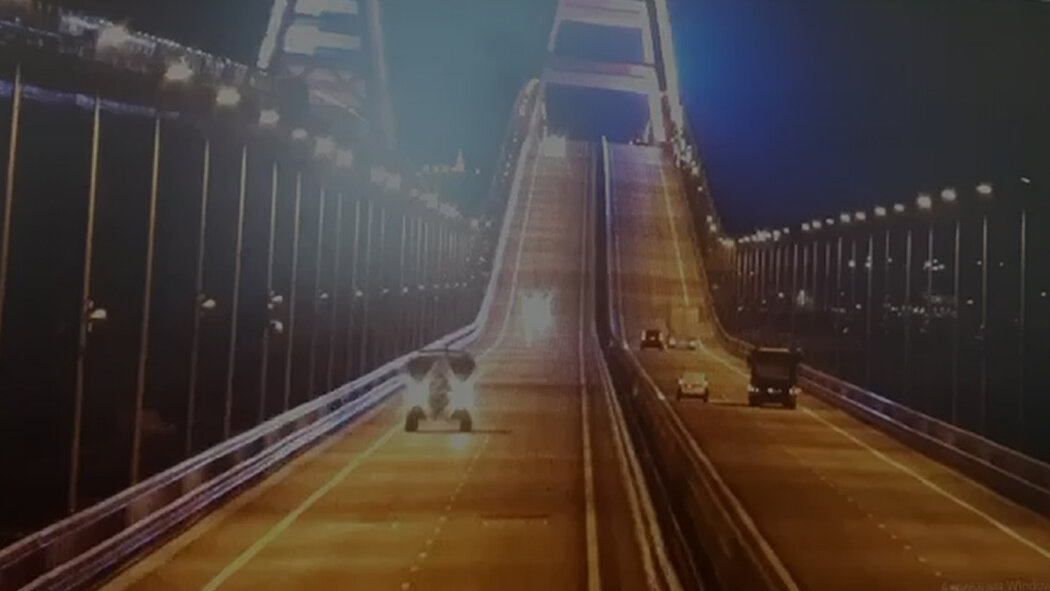 KRYVYI RIH, Ukraine — An explosion tore through the sole bridge linking the Russian-occupied Crimean Peninsula to Russia, collapsing a part of the span into the sea and imperiling a primary supply route for Russian troops fighting in the south of Ukraine.

The 12-mile-long Kerch Strait Bridge is a cherished political project of President Vladimir V. Putin and had become a potent symbol of the claims that Mr. Putin makes to the peninsula, which his forces illegally seized from Ukraine in 2014. Mr. Putin presided over the opening of the bridge in 2018, personally driving a truck across.

The extent of the damage was difficult to immediately assess, though any impediment to traffic on the bridge could have a profound effect on Russia’s ability to wage war in southern Ukraine. Videos showed the railroad burning and two of four lanes of roadway collapsed into the Black Sea, where waves lapped the asphalt.

The Russian Railways company said all trains to and from Crimea have been temporarily canceled, the state news agency Tass reported.

The bridge is the principal military supply route linking Russia with the Crimean Peninsula. Without it, the Russian military will be severely limited in its ability to bring fuel, equipment and ammunition to its units fighting an increasingly intense battle for the control of southern Ukraine. Russia still controls roads on overland routes from Russia into southern Ukraine, but those are within range of Ukrainian rocket artillery.

The peninsula also holds special meaning for Mr. Putin, who has told his people that Crimea is a “sacred place” and Russia’s “holy land.”

Russia’s National Anti-Terrorism Committee said in a statement that a truck had exploded on the bridge, igniting seven fuel cisterns being pulled by train on a parallel railroad crossing headed in the direction of Crimea and causing two car spans to partially collapse. Preliminary information suggested that three people were killed, Russia’s investigative committee said in a statement.

While there were no immediate claims of responsibility, Russian and Ukrainian officials indicated that the fire was no accident.

The Kremlin’s spokesman, Dmitri S. Peskov, referred to the episode as an “emergency” in a statement on Saturday, without assessing who was behind it. He said that Mr. Putin, who had celebrated his 70th birthday on Friday, had been briefed.

“The president directed the prime minister to form a government commission to find out the causes of the incident and eliminate the consequences as soon as possible,” Mr. Peskov said, according to Russian state media.

Occupation officials in Crimea left little doubt about who they thought was responsible.

“Ukrainian vandals were able to reach the Crimean bridge with their bloody hands,” said Vladimir Konstantinov, the head of Crimea’s Kremlin-installed Parliament. Multiple Ukrainian officials and government agencies hinted, often slyly, that Ukraine was responsible. Since early in the war, Kyiv has maintained a policy of ambiguity on attacks targeting Russian territory and some strikes on occupied land.

“Crimea, the bridge, the beginning,” Mykhailo Podolyak, an adviser to Ukraine’s president, wrote on Twitter. “Everything illegal, must be destroyed. Everything stolen returned to Ukraine.”

In a wink at claiming credit, the Security Service of Ukraine, known by its Ukrainian acronym S.B.U., issued a statement as a rephrased stanza of a poem by the country’s national poet, Taras Shevchenko. “Dawn, the bridge is burning beautifully,” the agency posted on Twitter. “A nightingale in Crimea meets the S.B.U.”

A senior Ukrainian military official did not deny that Ukrainian forces were behind the attack but would not confirm it.

“All I can say is that an echelon with fuel intended to supply occupation forces in the south of Ukraine was passing over the bridge,” the official said, speaking on the condition of anonymity because he did not have permission to speak to the news media.

As a symbol of Mr. Putin’s claim on Ukrainian land, the bridge has been tightly bound with the Russian president’s political messaging at home. Its partial destruction, however, could play into Mr. Putin’s claims that Russia is under attack from a Western-armed Ukraine and help tamp down domestic opposition to Russia’s first wartime draft since World War II. Ukrainian officials have said they worried hitting the bridge could galvanize Russian support for the war.

In recent weeks, military traffic heading across the bridge into Crimea has increased as Russia has raced tanks and artillery equipment to the front lines in the Kherson Region, which has been a focus of Ukraine’s counteroffensive against the Russian army. Russian troops have been in retreat, abandoning towns and villages and falling back toward the regional capital, Kherson.