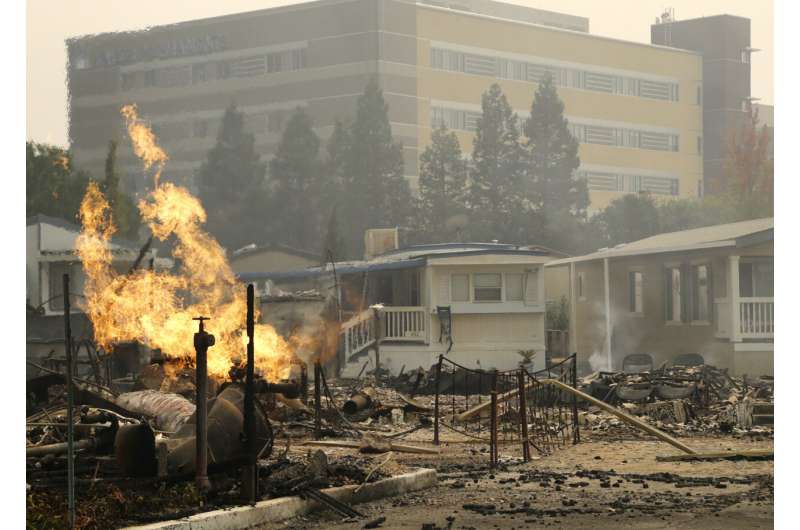 Dr. Suzy Fitzgerald remembers looking out the windows as wildfire flames surrounded the hospital where she worked.

“We had fire in all three directions,” Fitzgerald recalled. “I thought, ‘Oh gosh, this is serious. We need to get these people out.'”

Fitzgerald helped with the evacuation of 122 patients from Kaiser Permanente’s Santa Rosa Medical Center on that night nearly five years ago, as the blaze gobbled up homes and buildings across Northern California. The hospital, which had filled with smoke, closed for 17 days.

Medical centers around the country say that fires, flooding, heat waves and other extreme weather are jeopardizing medical services, damaging health care facilities and forcing patients to flee their hospital beds, according to a report released Thursday by the House Ways and Means Committee.

At a hearing, Dr. Parinda Khatri, the CEO of Cherokee Health Systems, told the committee that a pediatric clinic in Knoxville, Tennessee, was forced to close for 10 days this summer during a heatwave after the air conditioning system broke down.

Nearby wildfires forced evacuations at facilities in Oregon during 2020, Elizabeth Schneck of Providence Health told the committee.

A majority of the 63 hospital systems and community health centers that responded to the committee’s questionnaire say they have experienced at least one extreme weather event at some point in the last five years, with many of those saying they had experienced more than one.

The health centers reported a wide range of economic impact from the weather events, with the emergencies they experienced costing between $28,000 to $22 million to cover building damages, closures, evacuations, overtime for employees or deferred elective procedures, for example.

The organizations are not necessarily representative of hospital systems nationwide and may overrepresent both “large health systems with more resources to implement high-cost interventions and small community-based providers on the frontline with limited supports,” according to the report.

The report indicated that medical facilities are investing more resources, staff and planning to prepare for emergency weather-related events.

Fitzgerald said officials at the Kaiser Permanente facility took a hard look at its plans after the 2017 wildfire evacuation and developed new policies, including a new information tag staff attaches to patients with details about their condition and needs during an evacuation.

“It made for a much more orderly response,” Fitzgerald said.

Paul Biddinger, the chief preparedness and continuity officer for the Mass General Brigham health care system in New England, said they had hired climate scientists and engineers to examine its 30 buildings after watching hurricanes and floods devastate hospitals in New Orleans, New York City and Kentucky over the last two decades.

“Our health care system is clearly vulnerable,” said Biddinger. “But many people, including leaders of the health care entities themselves, often do not appreciate the degree of vulnerability.”

Many of the facilities included in the report indicated that they’ve put together working groups or have staff dedicated to climate change issues.

New York’s Northwell health, the state’s largest health care provider, has an emergency command room where staff monitors the news across televisions. Two of the screens are always turned to the weather.

From flooding that’s made it difficult for ambulances navigating roads to gusty winds and snow that have threatened power, the health care system has had to deal with more than 20 weather events in the last five years, said Donna Drummond, Northwell’s chief expense and chief sustainability officer.

Extreme weather is also a consideration when Northwell constructs a new facility or hospital, she said.

“Climate change is here, it’s happening, it’s impacting us,” Drummond said. “We need to be resilient. Our facilities need to be able to withstand storms and that were prepared for these events.”

The health care system itself is a driver of climate change, accounting for an estimated 10% of the carbon dioxide emitted annually in the U.S. President Joe Biden has set a goal of cutting U.S. greenhouse gas emissions by at least half by 2030.

House Ways and Means Chairman Richard Neal, D-Mass., urged the Centers for Medicare and Medicaid to release guidelines for health care centers to track and report those emissions.

“It’s clear more climate-related weather events and rising emissions will continue to worsen health care outcomes, and the time for action is now,” he said.

But many health care organizations are not doing enough to reduce pollution, Jodi Sherman, an associate professor at Yale School of Medicine told the House Ways and Means Committee.

© 2022 The Associated Press. All rights reserved. This material may not be published, broadcast, rewritten or redistributed without permission.

This document is subject to copyright. Apart from any fair dealing for the purpose of private study or research, no
part may be reproduced without the written permission. The content is provided for information purposes only.