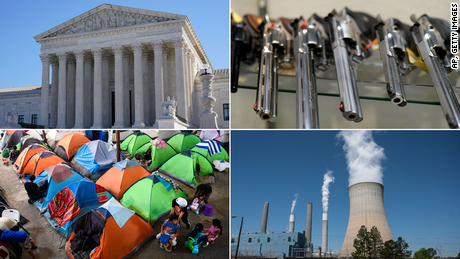 As Thomas settles into his fourth decade on the Supreme Court, his influence, even his control, is ascendant. Thomas began his career as a justice as a near outcast — an ideological fringe figure and a scarred veteran of a brutal confirmation fight. Today, he is a revered figure in the conservative movement, and he is watching ideas he championed from the margins turn into the law of the land.
For better or worse, Thomas has ignored his many detractors — from those who believed Anita Hill in 1991, when she testified at his confirmation hearings that he had sexually harassed her, to those in 2022 who argued that Thomas should have recused himself in cases where his wife, Ginni Thomas, a right-wing political activist, had taken public stands. Instead, he just keeps winning. The leak in Politico of a draft majority opinion for the court that would overrule Roe v. Wade is a vindication of views that Thomas has pushed since he became a justice. The draft, which rejects a constitutional right to abortion, was written by Justice Samuel Alito, but he draws on ideas that are more associated with Thomas than anyone else now on the court.
In 1992, the court reaffirmed Roe in Planned Parenthood v. Casey, seemingly settling the constitutional right to abortion. But Thomas, in a series of dissenting opinions, kept fighting to reject such a view of the law, and now (it appears) a majority of his colleagues have joined him. It’s not surprising that Alito’s draft opinion cites a half-dozen of Thomas’ opinions in the course of his work for the majority.
Gun rights are up next. When Thomas joined the court, the justices had never held that the Second Amendment gives individuals a right to possess firearms. But as early as 1997, in a concurring opinion in Printz v. United States, Thomas advocated an individual right, and that view was adopted by a majority of the court nine years later in Heller v. District of Columbia. That case concerned an individual’s right to own a handgun in the home, and Thomas has spent several years goading his colleagues to expand Second Amendment rights. For example, in 2017, he dissented when his colleagues refused to take up a challenge to a California law that prohibits the open carrying of firearms. He wrote that the decision in that case reflected a “distressing trend: the treatment of the Second Amendment as a disfavored right.” But the court may now be embracing a broader view of the Second Amendment. By July, it is expected to do just that when it considers (and likely reject) New York’s concealed carry law in New York Rifle & Pistol Association v. Bruen.
The court is heading Thomas’ way on a host of issues. He has long believed in lowering the barriers between church and state. He wants to make it easier for states to conduct executions and restrict the meaning of cruel and unusual punishment, as defined by the Eighth Amendment. He wants to limit the power of executive branch agencies to issue regulations, especially when it comes to protecting the environment. There are important cases due later this term on church-state relations (about a football coach who offered prayers on the 50-yard line) and the environment (about government attempts to fight the climate crisis), and the court looks to be leaning Thomas’ way.
More than any individual case, Thomas appears to be leading the court in his approach to precedent, which is also known as stare decisis. Even more than his frequent ally the late Antonin Scalia, Thomas frequently said the court should welcome the opportunity to overturn precedents that he regards as incorrect. As Thomas wrote in a 2019 concurring opinion, “in my view, if the Court encounters a decision that is demonstrably erroneous—i.e., one that is not a permissible interpretation of the text—the Court should correct the error, regardless of whether other factors support overruling the precedent.” In a talk last week in Atlanta, Thomas reiterated this view, saying, “We use stare decisis as a mantra when we don’t want to think.” Alito’s scathing rejection of Roe v. Wade in the leaked draft opinion in Dobbs v. Jackson Women’s Health Organization plays the same tune.
RELATED: It’s impossible to wall off reversing Roe from landmark marriage and contraception rulings

Of course, influence in the Supreme Court relies on more than the persuasiveness of a justice’s arguments. The main factor is the existence of ideologically sympathetic colleagues. No one on the court benefited more from the addition of former President Donald Trump’s three appointees — Neal Gorsuch, Brett Kavanaugh and Amy Coney Barrett — than Thomas. In particular, Kavanaugh’s replacement of Anthony Kennedy and Barrett’s taking the seat of Ruth Bader Ginsburg removed two justices with whom Thomas frequently disagreed in major cases.

Thomas is 73 years old — late middle age by Supreme Court standards — and he’s given no indication that he plans to step down anytime soon. He was hospitalized recently for what was described as an infection, but he is back at work and traveling again. With Chief Justice John Roberts allying himself more often with the court’s three remaining liberals — Sonia Sotomayor, Elena Kagan and the retiring Stephen Breyer — Thomas as the senior associate justice will have the right to assign the opinion when he makes a majority with Alito, Gorsuch, Kavanaugh and Barrett. That appears to be what happened in the Dobbs case about abortion; Thomas assigned the opinion to Alito. That’s an enormous power, and Thomas would seem reluctant to yield it anytime soon.

Victory does not necessarily equate with reason. Just because Thomas is winning, that doesn’t mean his views are consistent with the true meaning of the Constitution or that his decisions will make the United States a better place. Nor, for that matter, will these ideological triumphs make Americans forget Thomas’ confirmation hearings, when he was accused of sexual harassment.

Someday history will have its verdict on Clarence Thomas, but for now it’s his Supreme Court — and will likely remain that way for some time.